The Shisha Pangma is the 14th highest peak of the world, and is considered by many as one of the easiest 8000m mountains to climb. Shisha Pangma is the highest peak in the Langtang Himal and is located almost due north of Kathmandu entirely on the Tibetan side of the Himalaya. The peak is characterized by its long, steep, craggy southern face rising over 2000m, making it an imposing sight to all would be climbers. The Indian-Nepalese name for the peak is Gosaitan, which denotes “The Holy Place”. The Tibetan name for the mountain is Xixapangma. . It's name literally translates to "The mountain overlooking the grassy plains".

Shisha Pangma was the last of the 8000m peaks to be climbed. The first ascent is credited to Hsu Ching and his ten-man Chinese climbing team in 1964. The team was composed of Chang Chun-yen, Wang Fu-zhou, Chen San, Cheng Tien-liang,Wu Tsung-yue, Sodnam Doji, Migmar Trashi, Doji, Yonten. Shisha Pangma was finally opened to foreign teams in 1980. The first U.S. ascent took place in September 1983, via the mountain's Northeast Face, by Mike Browning, Chris Pizzo and Glenn Porzak. By 2003, Shisha Pangma had only recorded 201 successful ascents (to the main summit) and 19 fatalities. As of January of 2000, over 434 people have successfully made the climb to the Central Summit, but only 165 people have continued to the Main Summit, just over an hours climb away, separated by a knife edge ridge of sometimes very unstable snow. This data was collected and published by Jan Kielowski. 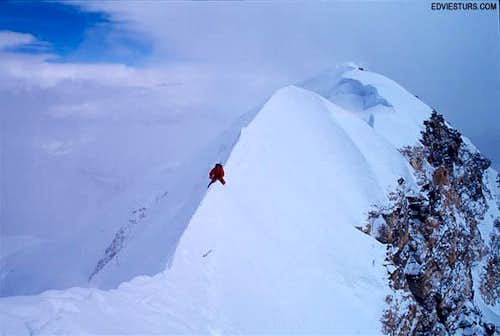 The Knife Edge to the Main Summit

Alex Lowe, one of America's strongest and best-known climbers, died on Shisha Pangma after an avalanche struck on 26,291-foot October 5, 1999. Also killed in the avalanche was camerman David Bridges who was filming the ascent for a documentary. World renown climber and friend of Lowe, Conrad Anker was also caught in the avalanche but survived.

The first winter ascent is credited to Simone Moro and Peter Morawsky who completed the ascent on the 14th of January 2005. Information on this climb can be found here.

Normally, expeditions start in Kathmandu. Then, you have to cross the border in Kodari and will get to Tibet/China. After 2 days acclimatization at 3400m in Nyalam, Jeeps will bring you within 5 hours to the Drivers' Camp at 4900m. (Another possibility is to fly from Kathmandu to Lhasa/Tibet. You will get to the Drivers's Camp within 2 days). From there, your baggage will be brought to the base camp by Yaks. The distance to the Base Camp is 18 km.

The Permit System
Unlike Nepal where you pay the peak royalty, liaison officer fees and expedition to the mountain separately, with China much of this is lumped together. Expect to pay about $3,000 for the permit plus additional costs listed below.

You must also work with the CTMA (Chinese Tibet Mountaineering Association). This Organization is responsible for all the permits, jeeps, hotels and other stuff in Tibet.

In addition, you can expect to encounter some or all of the following costs:

Thanks to Damien Gildea for corrections and additions to this section.

Best time to climb Shisha Pangma is pre-monsoon in April/May and possibly begin of June. Second season is post-monsoon in October. The duration of most expeditions to the mountain is 4-6 weeks.

The "normal route" is via the North-West Face and North Ridge. This route is considered among the easiest routes to the summit of all the 8000ers, and has often been skied. The greatest challenge of this route is traversing from the Central to Main Summits along a knife-edged ridge.

The South Face has at least six routes that ascend this 6000-foot face. All of the routes are hard, climbing steep snow and ice, while crossing bands of rock. The south face of Shisha Pangma was first climbed on May 26th and 28th 1982 and was done by Doug Scott, Roger Baxter-Jones and Alex MacIntyre, a British team. The most recent climb of south face was done by Geman Ralf Duimovits, Austrian Gerlinde Kaltenbrunner and Japanese Hirotaka Takeuchi on May 1st to 8th 2005. They traversed the mountain and descended to the tibetian side on normal route. Most ascents have been done in "alpine style", in which a climber straps on his pack at the base, bivouacs on a scratched out platform each night, and keeps moving towards the summit.

There are several other logical possibilities on the West Ridge and East face.

For the "normal route", climbers set up a base camp at 5700m (18km from the driver's camp), camp 1 at 6300, camp 2 at 7000m and a camp 3 at 7400m. Most of the route is snow. There is no problem up to camp 2, only big crevasses. Between c2 and c3 you have to climb a pretty steep slope. After c3, up to the summit, it stays steep but not too difficult. Most of the climbers stop at the Central Summit and do not make the knife tedge traverse to the Main Summit.