Manaslu (also known as Kutang) is the eighth highest mountain in the world. It is located forty miles east of Annapurna and dominates the Gurkha massif. The mountain's long ridges and valley glaciers offer feasible approaches from all directions, and it culminates in a peak that towers steeply above its surrounding landscape, and is a dominant feature when seen from afar.  This mountain was previously known as Kutan l. 'tang' being the Tibetan word for flat place, thereby describing the mountain's general summit.  The name was later changed to Manaslu, which is derived from the Sanskrit word Manasa and can be roughly translated as Mountain of the Spirit.

The first ascent of this peak was in 1956 by T. Imanishi and Gyalzen Norbu (Japanese expedition).  The peak was not climbed again until 1971 when a Japanese team made the second ascent.  It was not until 1997 that Charlie Mace made the first American ascent.  There are a half dozen established routes on the mountain today, the south face being arguably the toughest in climbing history.  As of 2003, the peak has seen only 240 successful ascents and 52 fatalities, making it the 4th most dangerous 8000m peak, behind Annapurna, Nanga Parbat, and K2. 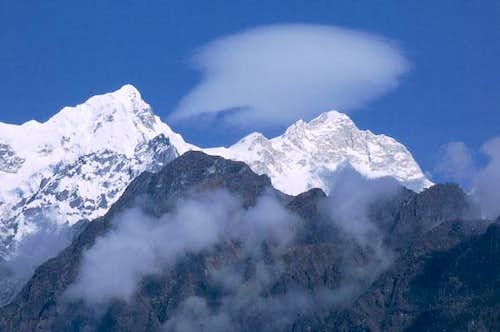 All routes to the base camp of Manaslu begin in Kathmandu. Expedition Time: Approximate time 62 days

The Trek to Base Camp:

History and Notable Ascents of Manaslu

Permits are required and may be obtained from the Nepalese Tourism Ministry.  Contact information below.

Effective from March 1 to June 30, 2006, the royalty amount for seven members expedition team is US $ 5000.  More information can be found at the following web site: http://www.tourism.gov.np/newsupdates.htm