Lhotse stands at 8516m, making it the fourth highest mountain in the world. It is situated at the border of Tibet and Nepal. Its long east-west crest is located immediately south of Mount Everest, and the summits of the two mountains are connected by the South Col, a vertical ridge that never drops below 8,000m. Lhotse has three summits: Lhotse Main 8516m, Lhotse Shar 8383m and Lhotse Middle or East 8413m.

Sometimes mistakenly Lhotse has been identified as the south peak of the Everest massif. No serious attention was given to climbing Lhotse until Everest had finally been ascended. Lhotse first climbed in 1956 as an alternative route towards the summit of Everest.

Lhotse Main was first climbed in 1956 by Ernst Reiss and Fritz Luchsinger who were part of a Swiss expedition. Lhotse Shar was first climbed on December 5, 1979 by Sepp Mayerl and Rolf Walter by taking the SE-ridge. It was not until 2001 that Lhotse Middle was conquered by the Russian Expedition (See below for details). 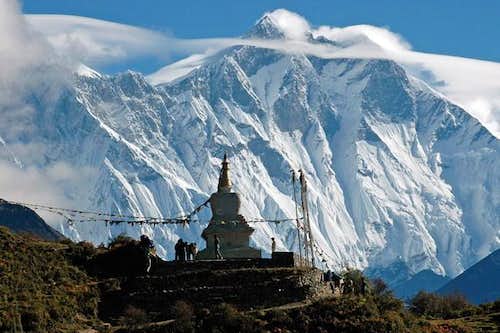 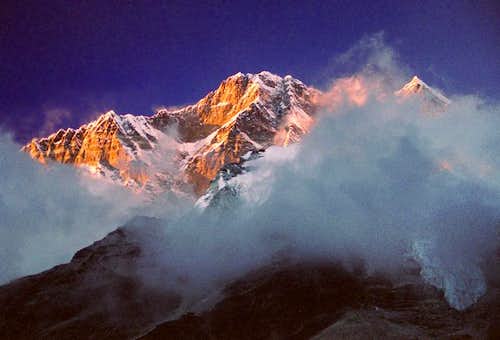 The western flank of Lhotse is known as the Lhotse Face. Any climber bound for the South Col on Everest must climb this 1,125m (3,700ft) wall of glacial blue ice. This face rises at 40 and 50 degree pitches with the occasional 80 degree bulges.  Two rocky sections called the Yellow Band and the Geneva Spur interrupt the icy ascent on the upper part of the face.

The south face is one of the most impressive walls in Himalayas.  The first expedition from the south side was Yuogoslavian leading by A.Kunaver. They selected the left side of the wall but they manage to only get to 8100 meters.  In 1985,1987 and 1989 three Polish expedition tried to climb the wall. The highest point they reach was 8300 meters.  During the last expedition, Jerzy Kukuczka-the second person who climbed all 8000 meter peaks died during the attempt.  Another expedition in 1989 lead by Reinhold Messner failed due to problems between members.

In 1990 Tomo Cesen said that he climbed the wall via Yugoslavian route.  The climb caused much controversy because many climbers didn't believe that the wall, which was unclimbed by so many good climbers, was by climbed by single person.  He later changed his mind claiming that he didn't reach the top but the summit ridge.  However, public opinion is that he reached only about 7000 meters.

The south face was finally climbed in 1990 by Russian expedition few months after Cesen's climb.  They describe the wall as impossible to be climbed by a single person.

Many thanks to jck for much of the above information.

For all the routes from the Nepalese side: fly to Kathmandu from New Delhi, then most expeditions fly to Lukla where there is a 'little' airstrip. From Lukla (2827 m) the walk to the basecamp takes about 10 days and passes Namche Bazar (3446 m) which is the main sherpa village.

As for almost every Himalayan peak, fees are to be paid. First there is a fee for trekking trough the Sagarmatha National park and second there is the climbing permit.  This fee is typically US $10,000, however, effective from March 1 to June 30, 2006, the royalty amount for seven members expedition team is US $ 5000.  More information can be found at the following web site: http://www.tourism.gov.np/newsupdates.htm