Clark Mountain is the highest point in a series of rocky peaks about 10 miles east of Reno, Nevada. Standing 7196’, it doesn’t seem all that impressive when compared to its western neighbors in the Sierra Nevada, including nearby Mount Rose at 10,776’. However, Clark Mountain has a prominence of over 1,300' and stands out in the Reno skyline. A classic desert peak, it is adorned with rocky cliffs and canyons, and rises steeply from the valley floor.  Clark Mountain appears from most vantage points to be a brown hill.  However, when hiking Clark Mountain, you notice its hidden treasures that make it special and much more scenic than a distant view would suggest.

Clark Mountain is not in the middle of nowhere.  It is in the middle of somewhere.  That somewhere is the Tahoe-Reno Industrial Center (TRIC), one of the most significant industrial centers in the entire country.  It has grown dramatically in the past few years.  Apple, Walmart, Tesla, are among the names associated with the TRIC.  Huge warehouses and data centers have opened.  Thousands of jobs.  Billions of dollars.  Lots of traffic.  This also led to the closure of the standard eastern access point to Clark Mountain that had been used for many years.

Although this access point is lost to all but those who work for the companies who block access, there is a straightforward approach from the west.  Access from the north may be possible from the McCarran Ranch preserve, although that starts at the Truckee River and requires hiking next to the river for a while before ascending.  There is no access from the south.  So the western access is the most direct access point.  It appears the western access is here to stay, but you never know given the level of activity in the area, and the fact that Clark Mountain itself is not officially on public lands.

The eastern side is the more scenic access point to Clark Mountain.  Several photos from 2010 have been posted on this page from that approach.  Sadly, that approach is off-limits today.  However, there is still excellent scenery from the western approach. 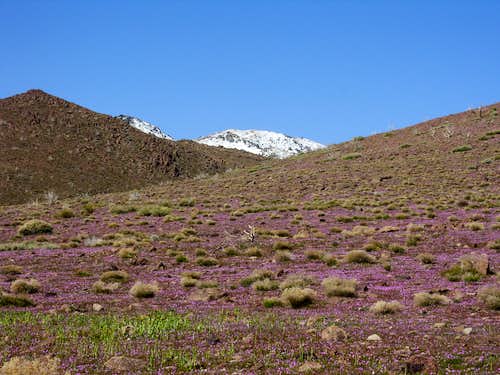 View of Clark Mountain from the east in 2010; access this way is now sadly off-limits.


Views from the summit are pretty spectacular. This includes the Sierra Nevada to the west, the Pine Nuts to the south, and the Pah Rah Range and Virginia Mountains to the north.  Mount Grant 11,300' in the Wassuk Range is visible to the southeast.

The best time to hike up Clark Mountain is probably fall (October, November) or late winter/early spring (late February, March, early April). During summer, temperatures are far too high. Clark Mountain is best hiked when there isn’t too much snow, which varies year by year.  The mountain can also get muddy, so avoid after snowmelt or rain.

From Reno, Nevada take I-80 east to exit 22 (Lockwood). From the exit, go straight through the town of Lockwood (speed limit 20 MPH).  Drive just under 3 miles past a sign for a rock quarry.  There is a gate ahead that blocks access.  But there is access before the gate.  The coordinates are 39.4821, -119.6204.  This is an obvious hiking area.  There is a dirt trailhead with no signs, but room for 5-6 cars.  This is the unofficial trailhead for the Long Valley Creek canyon. The elevation here is about 4,550'.

From the western route, start through the canyon.  After about 1/3rd of a mile, head up a very slight use trail.  This is now past the fence line that is up in the hills during the very first part of the hike.  Once you reach the top of the plateau, there is a jeep road.  Continue on the jeep road until you pass a larger road.  You will see a sign off to the left about 60 yards that notes there is "No Trespassing".  That is associated with the nearby landfill.  All you are doing is crossing the road; so no problems there. 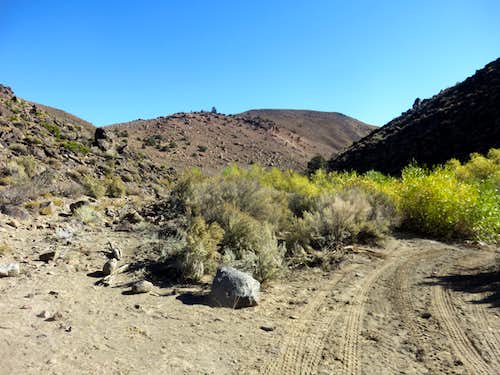 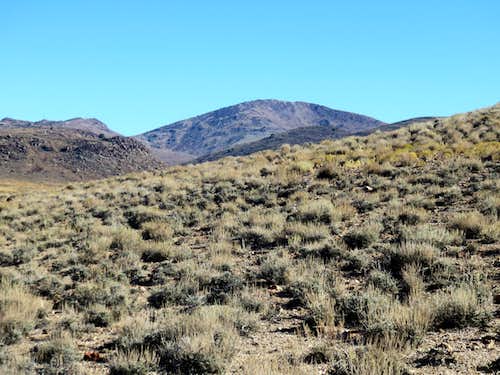 View of Clark Mountain from just below the first plateau
Continue on the jeep road, but then head up the slope.  This is the 2nd plateau encountered.  There are two options.  Option 1 is to go up and over the next hillside.  Stay generally to the right, heading generally east.  This will avoid any major drop off descents.  From this option you can reach the summit of Peak 6395.  From there, you will see a road below, with Clark Mountain rising over 1,000' above it.  Head up to Clark Mountain, about 1 1/2 miles away.  The elevation gain is over 3,000' in 5 miles depending on the exact route, and assuming a climb over Peak 6395.  This contrasts with the slightly less than 4 miles from the previous access point now closed off.  Another option is to stay to the left and take the canyon to Clark Mountain.  This reduces overall elevation gain to about 2,800' hiking about 5 miles.  Another suggestion is simply to make it a loop hike, going up and over Peak 6395 on the way there and returning via the canyon. 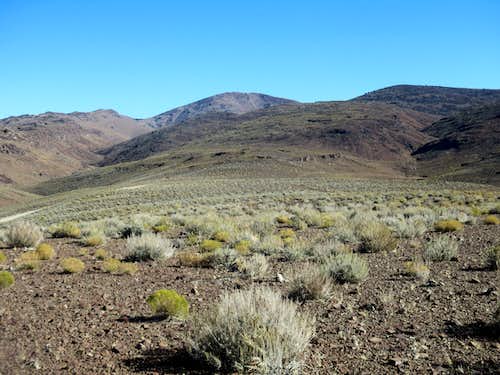 View from the 2nd plateau. Canyon on the left, Peak 6395 on the right 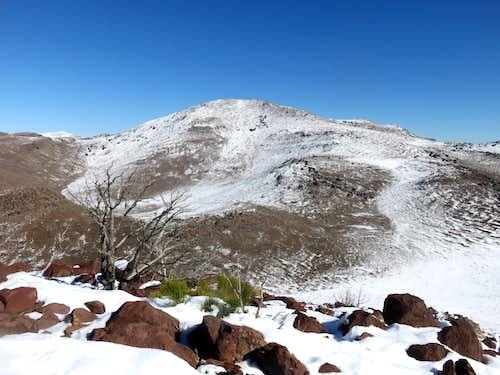 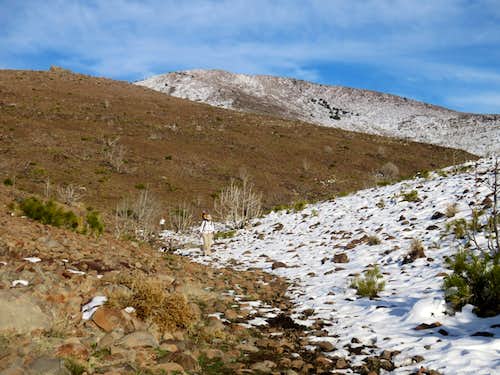 Clark Mountain from the canyon

For reference, the old route started off Peru Drive off USA Parkway and led to the Post Canyon, approaching Clark Mountain from the east.  This required just under 4 miles of hiking and 2,500' of elevation gain.  I did see a truck out on the old road leading out from Peru Drive on Halloween 2015, but there is clearly a sign at the start of the road threatening legal action to trespassers. 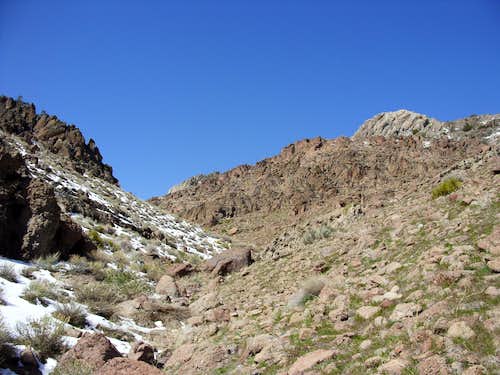 Hiking Clark Mountain from the east requires permission.  The issue is that the area where the access road is to Post Canyon is currently the site of a major construction project.  Although the Post Canyon itself is not being developed, nor is most of the access road, the fact that the first little bit of land is under development prevents access.  Access to the Post Canyon from further up the road is unclear and subject to change as new development increases.  From the west, park at the area described above and there is no red tape.