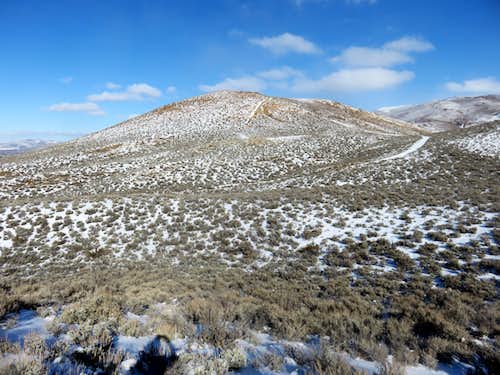 Nine Hill from the southwest
Nine Hill is a popular summit in Washoe Valley. Easily accessed from the Washoe Valley or Carson City, 4WD vehicles can make it up to within 317’ of the summit.

People often go shooting near the base, so there are empty shells and targets dirtying up part of the mountain. But the mountain still retains its charm due mostly to its reddish color.

While easily accessible, Nine Hill is steep. Steep roads from the south, southwest, the east and the northeast, climb up the steep slope towards the summit.

Views are excellent, due its location above Washoe Lake with unobscured views to the north. Views west are also excellent. 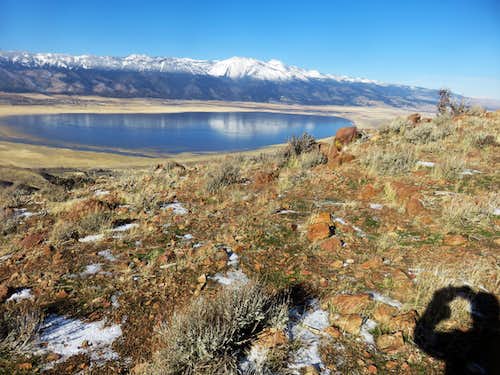 Washoe Lake and the Carson Range from Nine Hill

Nine Hill and the hills in the Washoe Lake area can get snow in winter, but it varies from almost none to a few inches. There was consistent snow on the mountains during the winters of 2009/2010 and 2010/2011, no snow pack for any length of time during 2011/2012 through the winter of 2014/2015. Snow returned for the winter of 2015/2016. Hiking in winter, even on snow, doesn’t pose a challenge. It is better than hiking on mud. The best months to hike here are October through March. Dry conditions or snow cover are preferred. 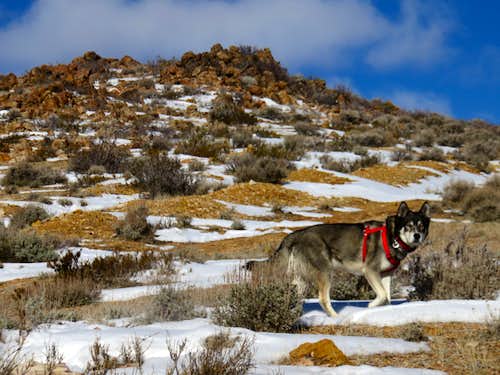 Espen dog near the summit of Nine Hill

The first access point is from the ranger station southeast of Washoe Lake. The second is 2/3rds of a mile to the west at a BLM trailhead.

From Carson City, take Goni Road which is accessed off of Arrowhead Drive.

From the northern trailheads, both will converge eventually. The basic requirement is to use the 224 dirt access road, which leads to the base of Nine Hill. The BLM trailhead has trails leading up to the 224, and the ranger station parking lot is at the base of the 224 road. Both are the same hiking distance to reach the road up Nine Hill. That is reached after about a mile. The road heads up 470’ in 0.4 miles. 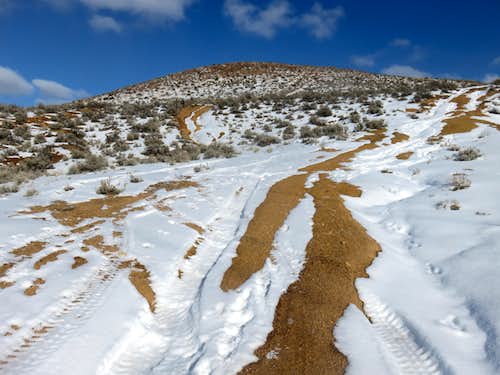 Alternatively, you can make this a loop, ascending the road at the saddle between Nine Hill 6,077’ and Peak 6105 and descending the steep road back to the 224. That is about 3 ½ miles round trip.

From Goni road there are a few starting points. You can hike up and over Peak 6105 or you can drive up towards the saddle road between Nine Hill and 6105 and there is a road heading up Nine Hill from the east. It is pretty obvious once you are there. These are generally shorter routes.

No permits or restrictions apply for a day hike of this peak.