Situated just east of Reno, Louse Benchmark is a large, rocky peak with spectacular features. Despite its proximity to a city, it feels rather remote when up in higher slopes. The highlight of the hike is a spectacular canyon at the beginning of the primary route. Locals refer to this as Eagle Canyon.  Louse Benchmark is located in the Virginia Range. It is called "Louse" on topographic maps based on nearby Louse Creek and the historic Lousetown; a now abandoned town that sprung up after the mining boom in Virginia City that began in 1859. The town was once a recreational spot with horse racetracks. By the late 1870s, however, the town was abandoned. What is left of the town is located east of Louse Benchmark. Louse Benchmark is clearly visible from the east in the Reno skyline. It stands out in particular because it the first mountain in Virginia Range looking south that has some tree cover. Once you get closer to this part of the range, you notice a big white D which stands for Damonte Ranch High School, situated at the base of the canyon. Louse Benchmark is also notable because it gets more snow than the slightly lower mountains just to the north. Hiking Louse Benchmark takes about 3 to 4 hours round trip, particularly due to the long time it takes to get through the canyon. The canyon involves some easy class 3, and lots of scrambling. There is no other scrambling or climbing required after the canyon is completed. The best time to hike Louse Benchmark is late fall and early spring. During summer months, rattlesnakes like to make a home in the canyon and elsewhere on the mountain. Winter creates ice in the canyon and the mountain can get a lot of snow from December through February. 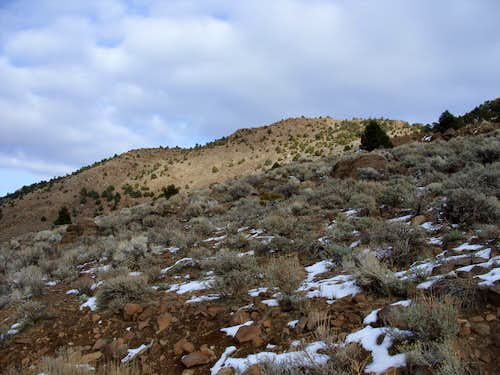 Looking up at Louse Benchmark from the road below

Getting to Louse Benchmark hasbeen a challenge in recent years due to construction near the base of EagleCanyon.  However, a new bypass trail was created to access theroute. Take 395 from Reno to exit 59 – Damonte Ranch Parkway. Once off thehighway, head east towards the mountains and turn left on Steamboat Parkway. Atthe end of Steamboat Parkway, take a right on Rio Wrangler Drive. The canyoncomes into view to the east. Take Yee Haw Way towards and continue onTrailrider Drive.  Head up towards Tobiano Drive.  Across from Tobiano Drive on Trailrider is apaved path.  Take this paved path and cross over rocks to a trail on theother side.  Alternatively, you can get to the trail without crossing therocks.  Just take a right off Trailriderat Gold Mine.  Take your first left onCavalry Circle and head up about 800 feet to the paved path.

Take the hikers path asit crosses the construction site, and continue until it dies out and stay in anopen area until you reach the foot of the canyon.  The canyon starts at about 4900 feet and climbs up to 5570 feet in about ¾ of a mile. However, this will take most hikers at least 40-45 minutes due to the difficult terrain. There is no trail, and there is lots of rock scrambling, including a few class 3 moves. Watch for falling rock, and ice during winter. 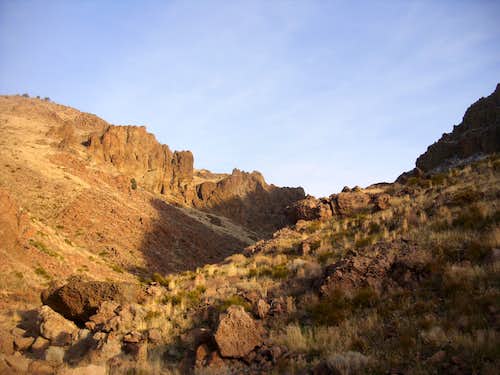 Entering the canyon
At the top of the canyon head left until you get to a road. As you continue moving left (north), Louse Benchmark comes into view. The road continues up a gradual slope and then eventually heads directly south just below Louse Mountain. After you pass under Louse Benchmark, continue up the road as its climbs up below Louse Mountain’s south shoulder. Look for a road turning east up the mountain. Once on the road, take it as it cuts back towards Louse Benchmark. The road continues for about half a mile until it tops out just between Louse Benchmark and its south shoulder. Head to the right to reach the summit of Louse Benchmark. From the saddle, it is about 250 yards away and 170 feet up. In total, the elevation gain for this hike is about 2150 feet, and 3.5 miles one-way.
Private land may be an issue via this route. An alternative is to head up the ridge towards the Buttes on the left side, and follow that road to the base of Louse Benchmark on its north side. There is a road going along the back. It adds a little over 1/2 mile each way, but may avoid the private land. If you want to avoid the canyon, head north away from the canyon and follow the road when it swings back to the south near some power lines. This heads up to the side of the canyon and then a road on the right heads to the ridge at the base of the Camel Back Mountain, about 1 1/2 miles northwest of Louse Benchmark. This adds about 1/4 mile each way.

If parking near the paved path,there is no trailhead.  It is in aneighborhood.  Just be respectful andpark on the street. There are no issues or permits needed to hike up the canyonitself.

There are no issues or permits needed to hike up the canyon itself. Once at the top of the canyon, it is not clear what is public land and what is private. There is a house located to the south of Louse Benchmark, and there is a “No Trespassing” sign along the road between Louse Benchmark and Camel Back Mountain to the south, but no fence to designate private land. Just be careful and watch for any signs that you might be on private land since it is not clearly marked.