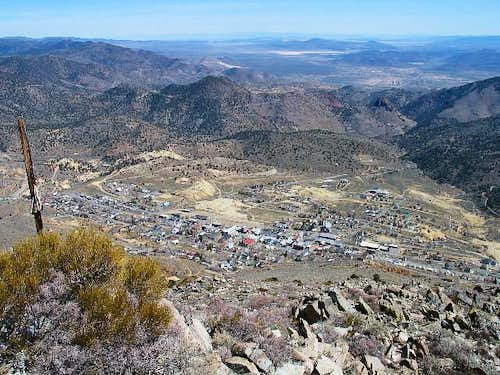 Virginia City from near the summit of Mount Davidson

While not very high for Nevada standards, what sets this mountain apart is that it is perched above the amazing historical town of Virginia City, a place that is worthy of visiting on its own merits.

Mount Davidson doesn't dominate and in fact, isn't overtly obvious from down in Virginia City unless you are looking for it; it kind of blends in with the other peaks ringing the small city. Virginia City sits at an elevation of 6,200 feet and has a population of close to 1,500 people.  Mount Davidson is better seen from the hills to the east of town. 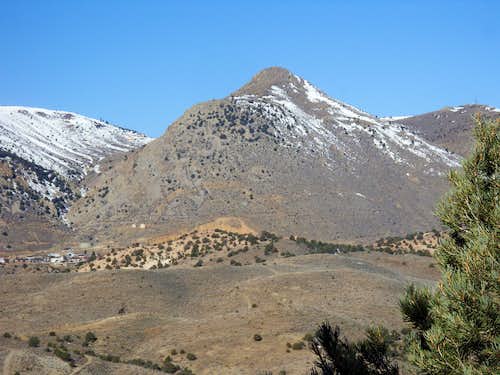 Mark Twain noted Mount Davidson in his book "Roughing It". He mentioned seeing a flagpole on its summit from which a flag is flown every 4th of July.

There is a famous flagpole on the summit which also has a flag attached. A written memorial by the Virginia City fireman is nearby and is a memorial to the victims of 9-11-01.

From the pages of his book, Mark Twain had this to say about the flag and Mount Davidson:

"It was not without regret that I took a last look at the tiny flag (it was thirty-five feet long and ten feet wide) fluttering like a lady's handkerchief from the topmost peak of Mount Davidson, two thousand feet above Virginia's roofs, and felt that doubtless I was bidding a permanent farewell to a city which had afforded me the most vigorous enjoyment of life I had ever experienced. And this reminds me of an incident which the dullest memory Virginia could boast at the time it happened must vividly recall, at times, till its possessor dies. Late one summer afternoon we had a rain shower. That was astonishing enough, in itself, to set the whole town buzzing, for it only rains (during a week or two weeks) in the winter in Nevada, and even then not enough at a time to make it worth while for any merchant to keep umbrellas for sale. But the rain was not the chief wonder. It only lasted five or ten minutes; while the people were still talking about it all the heavens gathered to themselves a dense blackness as of midnight. All the vast eastern front of Mount Davidson, over-looking the city, put on such a funereal gloom that only the nearness and solidity of the mountain made its outlines even faintly distinguishable from the dead blackness of the heavens they rested against. This unaccustomed sight turned all eyes toward the mountain; and as they looked, a little tongue of rich golden flame was seen waving and quivering in the heart of the midnight, away up on the extreme summit! In a few minutes the streets were packed with people, gazing with hardly an uttered word, at the one brilliant mote in the brooding world of darkness. It flicked like a candle-flame, and looked no larger; but with such a background it was wonderfully bright, small as it was. It was the flag!--though no one suspected it at first, it seemed so like a supernatural visitor of some kind--a mysterious messenger of good tidings, some were fain to believe. It was the nation's emblem transfigured by the departing rays of a sun that was entirely palled from view; and on no other object did the glory fall, in all the broad panorama of mountain ranges and deserts. Not even upon the staff of the flag--for that, a needle in the distance at any time, was now untouched by the light and undistinguishable in the gloom. For a whole hour the weird visitor winked and burned in its lofty solitude, and still the thousands of uplifted eyes watched it with fascinated interest. How the people were wrought up! The superstition grew apace that this was a mystic courier come with great news from the war--the poetry of the idea excusing and commending it--and on it spread, from heart to heart, from lip to lip and from street to street, till there was a general impulse to have out the military and welcome the bright waif with a salvo of artillery!"

Get the book, Virginia City and Mark Twain. They were proud of each other and Mark Twain still looms large in the town. Prior to being named Mount Davidson, after a California state geologist who climbed the peak, it was called Sun peak. This had to be prior to Mark Twain living there.

From Reno one heads southeast on Nevada route 341 up the Geiger Grade - a 6,800 ft pass that eventually drops down to Virginia City at 6,200 ft elevation. It is 15 miles from the US 580 highway exit 56 to Virginia City. There is also a SR 431 which goes west towards Mt. Rose and Lake Tahoe so don't get confused by the similarities of the numbers. The signs to Virginia City are obvious.

There are several route pages attached, but the Spanish Ravine route is the most straight-forward and well traveled.  It is a steep, but simple walk up.

There is presently no red tape.  Park in town or at the parking area described on the primary route page, and start hiking!

You could hike this peak all year round. Only under heavy snow conditions might the peak be problematic. It is a walk up, a good little conditioner and not one that should be made easier by driving up the 4WD road that gets fairly close to the summit.  That road is very steep, so it would be difficult to drive using even a standard 4WD.  On the summit is some communication equipment, but that does not effect the spectacular viewpoint.  The ideal months to hike here are February through April; and October through early December.

There are no campgrounds but there is an RV park for those who are so inclined.
The RV park information is HERE

Also you'll find lodging in nearby Reno and Carson City.

A weather link for Virginia City can be found HERE

Storey County was created in 1861 and named for Captain Edward Farris Storey, who was killed in 1860 in the Pyramid Lake Indian War. It is the smallest county in the state in terms of square mileage; despite its small size, it was the most populous in Nevada when it was created in 1861. Virginia City has always been its county seat. It was originally to be named McClellan County after General McClellan who later ran against Lincoln for President and lost. Today, Storey County is noted for its legal prostitution. In the 2006 election, Storey became the only county to vote in support of Question 7, a statewide ballot initiative to tax and regulate marijuana like alcohol, sponsored by the Marijuana Policy Project.

Here is a page discussing the history of Virginia City, Nevada

Storey County has a population of 4,000+ and of course the county seat is Virginia City.