Colàc - also Collàc - is the highest summit of the Colàc-Buffaure Subgroup within the Marmolada Group. It is a mountain of many faces - broad and massive when seen from the eastern and western sides it looks like a high and narrow tower from the north while from the south it appears to be a medium sized rock popping up out of the surrounding meadows. Forca Neigra to the south of Colàc is just 200m lower than the summit and quite naturally it is here where the normal route starts.

Though located in a perfect lookout position Colàc didn't see too many visitors before 1980. In that year a ferrata was established on the mountain's north face. The Via Ferrata dei Finanzieri is one of the more difficult ferrate in the Dolomites. It traverses the steep northern base of Colàc which is notorious for rockfall induced by other parties higher up on the face. Due to its steepness the ascent of Colàc can be done in less than 2 1/2 hours.

This, of course, is due to the fact that there is a cable-car leading up from Penia to the Ciampac meadows directly at the base of the mountain. A second stage can take you to Sella Brunec while another cable-car heads for the Buffaure summit. All three are within a mere hour's hike apart from each other. Loneliness is something you will certainly not encounter in the vicinity of the mountain. Still - thanks to the difficult routes - the summit is far less crowded.

As said above, Colàc is a grade A outlook peak. The setting is perfect to the west of the Dolomite's highest summit Marmolada with all the Groups of the western Dolomites all around. Though not taken from the top (rather from the base near Forca Neigra) this panorama gives a good indication of what you can expect.

This is the last of my 2005 Dolomite Submissions dating back to the July vacation. It took me so long to submit because I didn't climb the mountain myself and my efforts to convince one of the SP-members who climbed it for a joint effort were not very successful, Finally member Wokka agreed to share pictures and route description for the Via Ferrata dei Finanzieri. Those of you who speak German can visit Wolfgang's homepage for more information on other Ferrate of the Dolomites.

In order to prove my statement that Colàc is situated in a perfect lookout location let me offer you some shots taken from or near its base. I hope they are convincing... 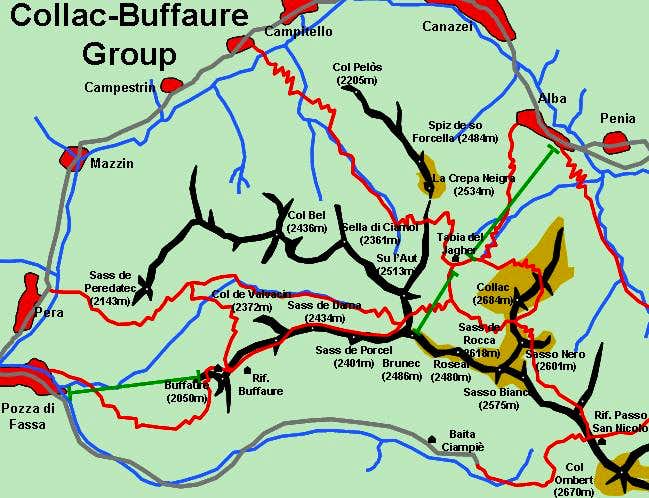 As said in the overview section there are two cable-cars which can take you up to the Colàc-Buffaure Ridges. For Via Ferrata dei Finanzieri the one from Penia to Ciampac is the closest approach. It takes you directly to the base of the ferrata. For a hike along the Roseal Crest and take the second stage to Sella Brunec. The longest approach would be the Pozza - Buffaure cable-car and a hike along the whole Buffaure Ridge.

Both Pozza di Fassa and Penia are located in Val di Fassa. While you can find Pozza in the south of the valley, Penia is located to the north, east of the big bend At Campitello and Canazei. Both villages are connected by SS48 and SS641 (east of Canazei). 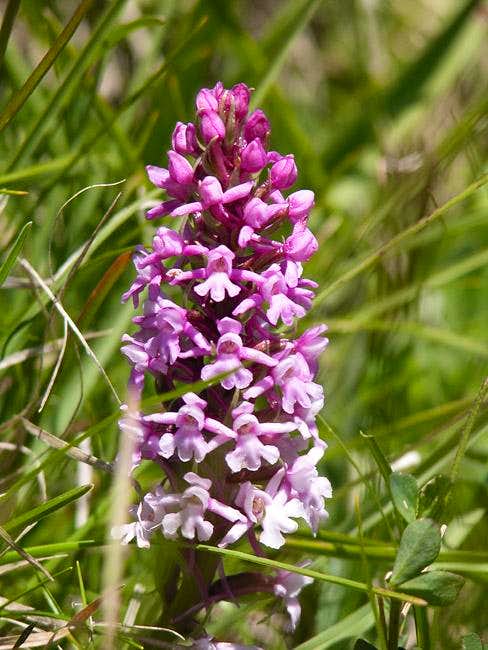 There is no red tape here. The Ciampac Meadows are a popular picnic location and tend to accumulate garbage over the season. For the ferrata be sure to tread as careful as possible while on the long and steep traverse. Rockfall is a major hazard here.

The mountain is best climbed in summer between July and September. Earlier and later in the year there can / will be snow on the north face, where the ferrata runs, making the ascent very dangerous.