Spiz di Tariciogn - what a name, impossible to pronounce - is the highest summit of the impressive Rizzoni Crest in the Marmolada Group to the south of the Dolomites. The crest itself defies all ideas of what Dolomite summits are supposed to look like: it is black with grass covers rather resembling volcanic ridges than dolomite towers. And that is what it actually is: the remnant of volcanic eruptions which took place in between the two geologic areas in which the Dolomites where parts of giant shallow inland seas. Due to tectonic forces here - these eruptive rocks have reappeared on the surface and form a stark contrast to the blinding white dolomite rock all around.

Interestingly there are several ranges - all long ridgelines - which cut through the Dolomites. Most famous of all is the Padon Ridge between the Pordoi and Fedaia Passes, which is located to the north of the Marmolada Group, exactly on its opposite side. The Rizzoni Crest, which forms part of the long Monzoni Ridge is the south-westernmost part of the Group, almost of the whole Dolomites. Only the little Latemar Group is further west and here also you can find eruptive rocks among the Dolomite. Both Groups are chossy, whereas the first non-Dolomite Group to the south, the Cima Bocche Group again is composed of solid porphyry blocks.

The Rizzoni Crest and with it its highpoint Spiz di Tariciogn are the exception to the chossy rule. While to its east you will find the flint stone rubble of Punta Allochet and to its east the grass covered talus of Cima Malinverno the Rizzoni Crest rather resembles (moderately) solid granite. Don't be fooled - climbing the vertical walls is not feasible - too many loose rocks guarantee high rock fall danger.

And yes, the walls are near vertical on both sides. To the south the ridge drops suddenly to the San Pellegrino valley, to the north the meadows of Valle dei Monzoni lie underneath. Leaving the ridge is possible only to the west and east along the Alta Via Federspiel, an easy ridgeline ferrata. It is mandatory to undertake the hike/climb to Spiz di Tariciogn only in stable weather conditions as the crest is very exposed to weather. You need to take into account that it will take two to three hours to reach and leave either of the two trailheads at Passo delle Selle and Forcella La Costella and that it will take up to four hours to cross the whole ridge.

The Alta Via Bruno Federspiel has its most impressive sections exactly here on the eastern part of the Rizzoni Crest. It is equipped with strong and firm steel cables so that the few climbing sections can be easily negotiated. When coming from the east the ferrata starts on the northern side of the crest some 50m below the ridgeline and later crosses to the southern side shortly before reaching the summit of Spiz di Tariciogn. It doesn't actually climb the summit but a short and easy scramble will lead you there. The descent to Forcella Ricoletta is steep slippery and a bit hazardous. It's a good example that the most dangerous parts of a ferrata are not always the best equipped ones.

Last but certainly not least: you will be alone on Spiz di Tariciogn. The ascent routes are too long and there seem to be more interesting targets in the area. While climbing the Monzoni Ridge in late June we came across zero other hikers/climbers. Since views are great, if not spectacular you can throughout enjoy your day.

The summit of Spiz di Tariciogn is certainly a very good vantage point. However for us weather turned from perfect to very hazy within the hour it took us to reach the summit from Punta Allochet. Lots of clouds obscured the views but the pics tell you what you can expect.

There are two possible trailheads for the climb to Spiz di Tariciogn: Passo di San Pellegrino to the south-east and Malga Crocifisso in Val di San Nicolò to the north. Depending on what you want to do one might be preferrable to the other. 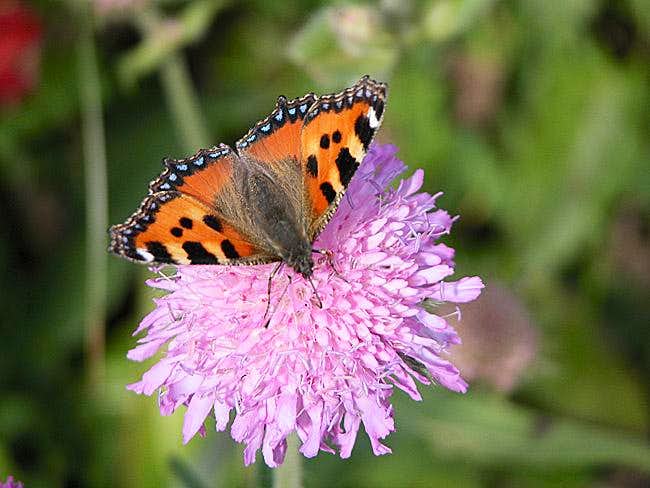 To my knowledge there is no red tape on any of the routes and not on Spiz di Tariciogn. However part of the Alta Via Federspiel runs along old WW I trails touching upon several Austrian positions. In one place, directly west of Punta Allochet it actually goes through a tunnel. The trail, together with Via Ferrata Bepi Zac on the neighbouring Costabella Crest has been set aside as a monument and document to the war. Please leave everything in place and don't unnecessarily destroy the old forts and trenches. Erosion is doing that for you anyway.

Along Valle dei Monzoni there are quite a number of Malghe (Alms) with their free running livestock. Be sure not to disturb the animals. Keep dogs on leash and close the gates after you.

Spiz di Tariciogn is a summer destination. The Monzoni Ridge can be climbed in winter up to Punta Allochet in the east and Cima Malinverno to the west. The Rizzoni Crest is an improbable and dangerous winter destination. The hiking season runs from June through late September.

Camping
The closest campground is Vidor in Val di San Nicolò. Its address and the ones for the other nearby campgrounds are:

Other accommodation
The best information on boarding houses and hotels can be found on www.dolomiti.it. The site is not complete – you might find more information on local tourist web sites, but it already offers an impressive list. The following listing gives you an overview for the surrounding villages and towns:

Passo di San Pellegrino is the border between Belluno and Trentino. Spiz di Tariciogn is located a bit to the north-west of the pass so that both weather forecasts apply here: