Cooper Spur is the snow and ice covered back stretching down from the summit of Mt.Hood towards the north-east.

The actual Cooper Spur is a huge moraine to the south-east of Elliot Glacier. Starting just above "Cloud Cap Inn" continous to it's highest point, the "Tie in Rock" at about 8500' elevation.
Permanent snow and ice coverage starts at about 9000 feet past the Tie in Rock. The snow slopes are starting with a mellow pitch, soon becomming very steep and the pitch will increase permanently, count on a 50 degree slope towards the peak.

In the summer month as early as June/July and until the snow flies again, the upper part of the route is snow-free past 10,500'. During the summer past that elevation the route changes into something between loose rock and sand and gravel until you reach the summit. The upper parts of the Cooper Spur, the ones without snow in the summer, are also called out as the Chimneys in most topo maps. 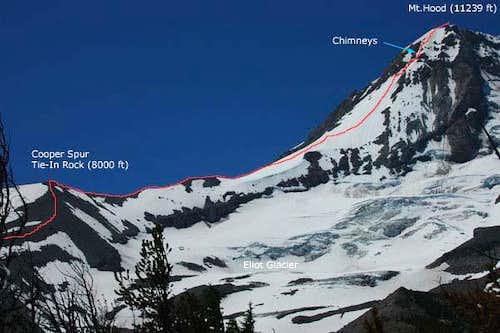 Take Highway 35 from Hood River and follow it until the turn off to Cooper Spur Skiarea, aproximately 23 miles past the town. Drive an other 2 1/2 miles to the Cooper Spur Skiarea (signs), and from there take forest service road 3512 towards Cloud Cap Inn/Tilly Jane and the trailhead (about 6000 ft elevation). This road can get rough sometimes over it's entire length of 9 miles. Trailhead is either the Cloud Cap Campground or the Tilly Jane Guard Station. Campground, Outhouse, Water; Shelter at Tilly Jane.

You can choose between Tilly Jane Campground and Cloud Cap Campground. The forest road forks 1 mile before you reach either one of them.

Tilly Jane provides a nice primitive shelter to stay overnight, and it is situated in a beautiful setting just along a running creek.

Cloud Cap is the busy place where all the day hikers park. If you are late in the day it's hard to find a parking spot, but the big advantage is that you are already 200 feet higher in elevation.

From Tilly Jane follow the signs to the Cooper Spur Route, the trail will merge with the Timberline Trail 600 and the trail from Cloud Cap just below the "Shelter".

From Cloud Cap follow the Timberline Trail 600 clockwise until the trail merges with the trail coming from Tilly Jane just below the Shelter.

An alternative trail/approach is to get to the crest of the N-E moraine of Eliot Glacier by following the TL Trail 600 to the west for a couple of feet and keep right on the fork (new trail, sign). Climb through loose sand to the top of the moraine and follow the climber's trail until you reach the "Tie in Rock"

From the intersection of TL Trail 600 and the Cooper Spur Trail just below the "Shelter" follow the Cooper Spur Trail all the time. It will wind up the mountain and continue till the snow starts past Tie in Rock. There are many short cuts and variants, and it really doesn't matter which one you choose, they all come together at the "Tie in Rock". From there it is obvious where the route is heading. Follow it until it reaches the summit. 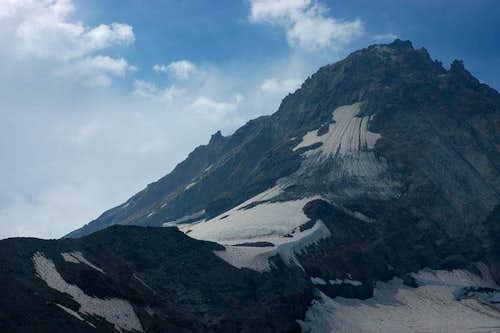 Do not underestimate the route from it's initial visual appearance. The most dangerous part are the loose rock and sand portions in the Chimneys, and the EXTREME rock fall on the permanent snow fields below the Chimney's during the day when the temperatures are rising.

Though it is not a technical route, I would not recommend this one for beginners. Snow, ice and rock scramble with up to 50° slopes in the upper part through the Chimneys and below the summit.

The Cooper Spur Route below the summit of Mt. Hood is notoriously dangerous, having caused the deaths of at least 13 climbers.

This route also has to claim several ski descents in spring and early summer when the snow coverage is continous from the summit through the chimneys all the way down to the Tie in Rock.

Climbing Mount Hood from the north means - climbing on loose rock and in loose gravel and sand!?

Many groups rope up because a fall near the top can be lethal.

Spring and early summer, depending on snow conditions. The route is exposed to the sun all day in the summer month and the descent in soft and slippery snow in the afternoon can become difficult.

Summer climbs are possible too, but someone has to deal with lots of loose stuff. More like a gravel pit, just steeper and more exposed - the less snow coverage you have the more you have to deal with the loose rock, sand and gravel.

The climbing time will vary on route and weather conditions and might take between 6 and 9 hours. 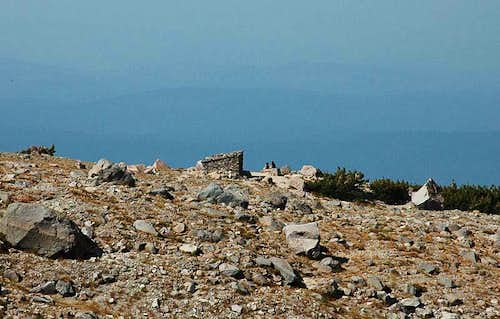 "The shelter" - it's a real one with a water proof roof

Northwest forest pass is required for parking the car at Cloud Cap or Tilly Jane, or a daily parking permit available at the self-issuing station at the trail head (I think $5.00).
In addition fill out a Wilderness Permit at the self-register at the trailhead (no fee). You are entering the Mount Hood Wilderness, please respect the Wilderness rules.

Deadliest route on the mountain

I believe there have actually been 16 deaths on the cooper spur route, If I'm not mistaken, it's the most deadly route on the mountain. Many people think it's just a step up in difficulty from the south route. It's a BIG step up from the hogs back route!