Historical notes
The Corno Battisti is a summit belonging to the Pasubio group. It ovelooks the Vallarsa on the NW side of the main ridge of Pasubio and is mostly known for the historical events than for its climbing features: on its slopes, during the offensive of May-Jun 1916 many members of the Italian Alpine Troups of the Vicenza battalion were taken, among them the lieutenent Cesare Battisti and the second lieutenant Fabio Filzi, ot Austrian nationality but Italians; they were tried for betrayers and hanged up.

During the offensive of Oct.Nov 1918 the whole Pasubio massif was captured by Italian Army that arrived up to Trento and beyond, putting the border to the natural boundary of Brennero.


From its summit a wide panorama: from West the Adamello group, the Monte Altissimo, the Monte Baldo, in foreground the Monte Zugna, and Cima Carega, the Pasubio Group with the Dente Italiano and the Dente Austriaco, in front the Monte Roite. 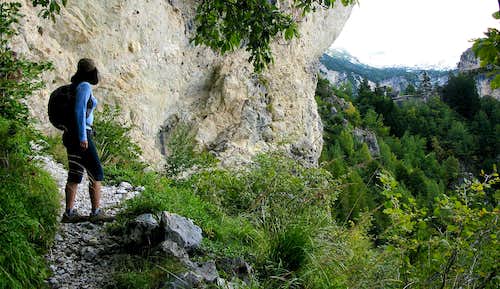 Trail 102
Vallarsa - Anghebeni - Valle dei Foxi - Corno Battisti
From Anghebeni 642mt. by car up to Ca' d'Austria then on foot along a military road that with many hairpin bends along the Valle di Foxi. in about 3 hourse leads to the Bocchetta dei Foxi 1720mt.
On along the left path up to the Selletta Battisti 1718 and, following in the remains of a trench, up to the Corno Battisti 1760mt.

Sentiero attrezzato Franco Galli (122)
From Rovereto along the Vallarsa road to Valmorbia, here turn to the left to get the end of the road at Tezze (723m)
The path Franco Galli runs a complex system of tunnels digged both by Austrians and Italians.
Valmorbia: from Tezze, along a dirt road, once at a fork follow straight along the well marked path n°122. The road becomes a steep path leading to the glade of Malga Trappola (1316m)
Along the ridge up to the sella della Trappola (1434 m), where we meet the path coming from “Casa d’Austria”: here is the starting point of the equipped path.
Climb along a vertical channel (fixed rope) and, after a series of tunnels and another equipped stretch, you arrive near the summit of “Cappuccio di Pulcinella”.
Follow the descending path to the selletta del Trappola.
Now you must climb the W channel along short tunnels with steps, then some steep bends toward the vertical wall of Monte Corno up to the entrance of a big tunnel, named “Bocca del Leone”: the door to the underground system, well secured with a steel rope.
After a first steep stretch you arrive to a ledge, now a dark tunnel that leads to a first exit; going on, steeply, to a fork : on the left side a further tunnel (descending with steep steps) leads in the open, at the end of the equipped path.
On along the last part of the canalone Battisti, till the Selletta Battisti and, turning to the right, quickly to the summit.