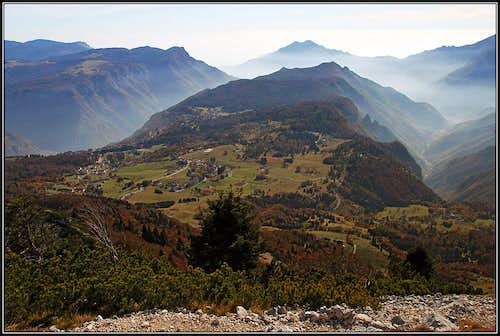 The view from Spitz Tonezza 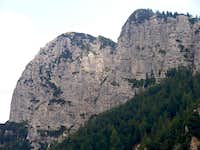 gabriele - from the NW

Autumn on Tonezza plateau
Exploring the heritage of the World War I, you must visit also the places on the right (SW) side of Val d'Astico. Geographically, the mountains there belong to the broad Pasubio group, the highest summits of it are seen towards the SW. The whole area is very nice for hiking, biking and in winter also cross country skiing. Many roads are closed for public traffic. Spitz Tonezza is overlooking only the lower part of the area, more towards the W and the NW there are also some higher mountains, which are also interesting, because of fine views and because many of them were hosting fortifications during the WW1.

This is a nice village, situated on a plateau between Val d'Astico and Vale della Sola. There are many historical places, hiking paths, biking routes, some places for sport climbing etc.

The view from Monte Cimone towards the SW, on the Carega-Pasubio group
This outposted rock, south of the village of Tonezza, played a key role in the WW1. The most tragic event happened when Austro-Hungarian soldiers, being unable to capture the summit by classical means of warfare, digged a tunnel below the summit, put a huge amount of explosive in it and blew everything up. It is said that it lasted three minutes until all rocks which were blown up, fell down. A huge crater emerged and hundreds of Italian soldiers died. Yet, the fights continued and there were a lot of casualties on both sides till the end of the war. Nowadays on the summit, or whatever remained of it, there is a monument pyramid, seen from far around. You can best approach Monte Cimone by the road from Tonezza village. Drive south a few miles, the road reaches a big parking place just below the summit. From there, you can do a short round walk by the trenches. For those who want to do more walking up and explore more WW1 heritage, there are also marked paths, reaching Monte Cimone from the nearby valleys - Val d'Astico and Valle Rio Freddo. These hikes can last up to 3 hours to reach the summit. 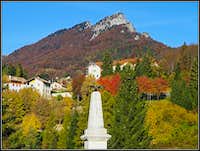 Summit view towards the NW
This fine limestone rock summit can be seen from far around, monitoring the plateau of Tonezza village and the valley of Astico. Despite its rugged look, it can be quite easily ascended. On the very summit there were no heavy fortifications during the WW1. However, there can be seen caverns below the main summit. It looks that for heavy artillery other, more easilly approachable hills were used, while infantry was not clashing on Spitz Tonezza, because the frontline went a bit away of it. From the summit you have a very broad panorama. Towards the N and NW you can see the higher summits of Vicenza Alps, from behind them the glaciers of Adamello-Presanella group are shining. Towards the N and NE the whole plateau of Lavarone and Asiago can be overlooked. You can clearly see many of the places where huge fortresses are standing and imagine heavy gunfire exchange every day of the WW1. Towards the south there is a great view on the nice Tonezza plateau and the valleys, descending towards Po river plane. And all the W and SW side is packed with the summits of Carega-Pasubio group. In this whole area the frontline went in the SW-NE direction. The ascent takes some 30 minutes and is quite easy. The best trailhead is on the road, which passes the mountain on the E and NE side. You park Chiesetta del Restelle (chapel) and go by the marked path towards the east. At first you go by a mountain road, after some 500 meters you leave it and continue by the path which keeps on the slopes below the W ridge of Spitz Tonezza. While crossing towards the east, you gain some altitude. When passing the rocky fore-summit, you descend a few meters, then go in a few turns up and gain the notch between the fore-summit and the main summit. From there you continue crossing towards the E and only later ascend in several turns the main summit. Except some minimum care on the steep slopes the path is not difficult and is appropriate also for children.

The view from Fort Cherle
There are many big forts on the hills above these plateaus, let's mention on this page only Fort Cherle, which is not so far from the summit of Spitz Tonezza. The panoramic road from Tonezza village bypasses Spitz Tonezza by its eastern side and then continues towards the NW towards Passo di Sommo. Forte Cherle is positioned on the edge above the upper Val d'Astico. During the WW1, it was equipped with everything to survive up to 30 days, and had also material cable way supply. The fortress was never seized by Italian army. Today the site is arranged for tourist visits, equipped with big explanatory panos. Besides enjoying a broad panorama, you can also get into the fortress and see on top of it posts for heavy guns which were mastering the near and distant surroundings.

Chiesetta del Restelle
Spitz Tonezza and Tonezza plateau can best be approached from the SE. From Vicenza there is the highway till Piovene-Rocchette. There you continue by Val d'Astico, following inscriptions to Trento. After Arsiero (above it, you clearly see the pyramid on Monte Cimone) you deter left and drive by a good asphalted road up to Tonezza village. This road continues further towards the N and later NW, all the way to Passo del Sommo. That can be the approach road in the opposite direction, so coming from Trento or Rovereto via Folgaria.

The area is very interesting for a visit any time of a season. The ascent on Spitz Tonezza however can best be done in dry season. The upper slopes can be difficult in heavy snow.