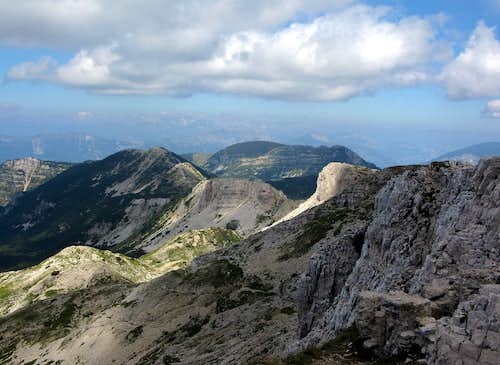 Tiziana - the summits of Pasubio

Monte Pasubio is the highest mountain in Pasubio Group, stretching from Passo Pian delle Fugazze on the south to Astico Valley. Pasubio Group belongs to Prealpi Venete, the German classification refers these mountains also as the Vicenza Alps. Other neighbouring groups are:
- Monti Lessini (the massif south of Passo Pian delle Fugazze, with Cima Carega as the highest summit),
- Sette Comuni (mountains above the Asiago Plateau - between the Astico and Brenta valley),
- Monte Grappa (the massif east of Brenta river), - Lagorai Chain and Cima d'Asta Massif

Monte Pasubio has its great, but sad reputation from the World War I. Here the two armies positions were very close and heavy fightings were taking many casualties. That's why the high plateau and almost the summit can today be reached by military roads. And what roads! Strada delle Gallerie is a true masterpiece, where a narrow road overcomes 800 meters of altitude, going over vertical walls, steep ravines, rock towers and narrow ridges. But it's allowed only for hiking as there were already casualties among bikers (the penalty for biking is €250!). Other nice military roads are very appropriate for mountain biking.

When reaching the Porte di Pasubio you can hike up to the main summit, called also Cima Palon, or you can take a round tour, visiting many relics from the World War I. The summit of Monte Pasubio can be reached also by many paths from other directions. I have no information about more difficult climbing routes on Monte Pasubio (members, please add info!). Monte Pasubio also looks possible for tour skiing. A great biking tour: Ponte Verde, 942 m (on the main road) - Passo Pian delle Fugazze, 1159 m, - Strada degli Eroi - Porte di Pasubio, 1928 m, - Passo di Fontana d'Oro, cca 1700 m - Malga Campiglio, cca 1150 m - Passo di Campiglio, 1216 m - Ponte Verde. Some 6 hours.

Besides the neighbouring mountains in a clear day from Monte Pasubio one can see The Adriatic sea with Venice, Dolomites, glaciers of Adamello and Presanella and also a part of the main crest of Alps.

From the north, from Central Europe the Adige valley can be reached by the Brenner motorway. South of Monti Lessini the highway Venezia-Milano runs past Verona. From this highway, you can deter and drive northwards by the highway till Schio/Thiene, where you turn westwards towards Passo Pian delle Fugazze. Monte Pasubio can be reached from all sides. 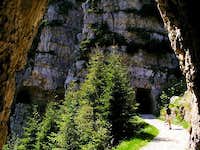 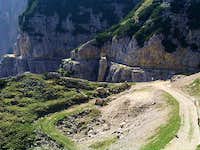 Also due to the World War I there are so many paths and military roads to the summit plateau and the summit itself, that it is hardly possible to mention all. A good map can help you ascend the summit easily. The most popular (frequented) ascend routes are Strada degli Eroi and Strada delle Gallerie, but many hikers ascend the summit also from other directions.

Here are two pictures of walls with routes on the southern part of Monte Pasubio: 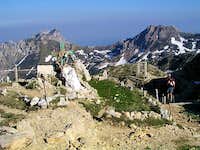 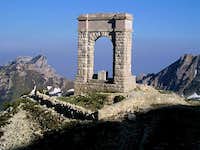 For a more detailed description of the WWI on Pasubio see other resources. In severe fightings on this area there were more thar 13.000 casualties. As 'The Peace Trail' crosses also Pasubio, one of the resources to read can be: Claudio Fabbro : "Sentiero della Pace", Euroedit.1997. Here I shall post only a few pictures.

No limitations. Military roads on the summit plateau are closed for public traffic.

Monte Pasubio can be climbed any time of the year. Of course different routes have different best seasons. 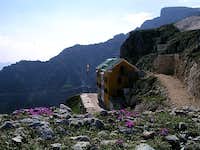 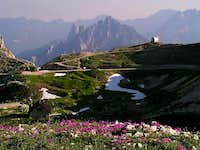 For info thanks also to Claude Mauguier and Gabriele Roth.

By the main road, just above Ponte Verde, there is the Rifugio Balasso. Gabriele Roth says it was once the best starting point for climbers (the signature picture illustrates why) ... and food was fantastic.

Rifugio Bòrcola, 1182 m. - near Passo Bòrcola, between Val Posina (S) and Val Terragnolo (N). Summer opening, with about room for 10. No service.

2 - Less than 100 meter in distance to the latter, behind and slightly higher, stands Bivouac Marzotto-Sacchi, with room for 10. It opens only in winter ( +++ mind ! avalanche hazard in this particular zone ! +++) One should check anyway before any outing, ringing at least the official alpine associations (SAT/CAI) and/or local Tourist Offices.

I think little might be said more than was mentioned on "Cima Carega" page, about this topic, unless detailed developments could be available.