Mt. Massive is the second highest peak in Colorado and the third highest in the 48 states, exceeded only by California's Mount Whitney and its near neighbor, Mount Elbert. It's name tells all. It has five summits above 14,000 feet on a 3-mile-long ridge. Massive has more area above 14,000 feet than any other mountain in the 48 states, narrowly edging Mount Rainier in that category. The mountain, along with Mt. Elbert, forms much of the western skyline of Leadville, which is 11 miles east and slightly north.

Mount Massive is part of the Sawatch Range, which was formed by tectonic uplifting, where two tectonic plates (the now gone Farallon Plate grinding below the North American Plate) featured an active, and somewhat rare subduction boundary. It was rare due to the angle of subduction, which was only about 20 degrees or so causing volcanism to occur much further inland than normal. This grinding uplifted the Colorado Rocky Mountains, as well as the entire Colorado Plateau which is known as the Laramide Orogeny.

There are several glacial lakes in the wilderness area. The lower slopes of the mountain are covered in lodgepole pine forests, which gradually yield to Engelmann Spruce and Subalpine Fir. Treeline is just below 12,000 feet. The mountain and 30,540 acres of the surrounding area were designated the Mount Massive Wilderness by Congress in 1980. Keep in mind that you have to abide by wilderness regulations while in this area.

The first ascent was in 1873, by Henry Gannett. In the last ten years, Mount Massive like other readily accessible fourteeners, has become very popular for climbing on summer weekends. Expect to meet lots of other climbers. 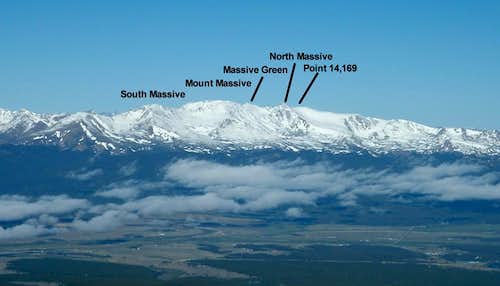 The closest airport to the trailhead is Denver International, approximately 140 miles away. To get to Leadville, head west on Interstate 70 then take exit #195 on to CO91 south. This merges into US-24 just before Leadville.

To reach the standard route for Mt. Massive, drive south on US-24 from Leadville for 3.6 miles. Turn right (west) on Colorado 300, then turn left (south) on Lake County 11 at 0.7 miles. Turn right (SW) at 1.8 miles onto another dirt road marked with signs for Halfmoon Creek. Pass the San Isabel National Forest boundary at 3.9 miles. Continue to the Mt Massive Trailhead parking lot at 7.0 miles.

If properly acclimated to the elevation in the area, climbing Mount Massive is a nice day hike. Depending on your fitness level, the main trail can take anywhere from 5 hours to a long day. Whatever route you choose, make sure to get an early start. Afternoon thunderstorms are very common in the summer. The mountain is above treeline, and you will have no protection against a lightning strike. Acclimitization is key to making good times. If you fly in from sea level and climb the next day, you risk altitude sickness, which could be fatal.

There are two primary trails, two seldom used trails from the north, and several seldomly climbed ridgelines and slopes up Mount Massive.

1. Main Range Trail to Mount Massive Trail - The standard route on the mountain is 13.6 miles round trip with a 4,370 foot elevation gain, via a class 1 trail.

2. West Couloir via Halfmoon Creek Trail - This route is another popular way to get to the summit, via a class 2 scree couloir. It is a shorter path to the summit, but is steeper and more difficult. It is approximately 9 miles roundtrip with a 3,870 foot elevation gain. Read this route for more details. This is not the official trail to get to the summit of Massive. However, it is very popular trail, but the turn for the climber's trail is difficult to find. The guide books say that you will find a cairn that marks the trail soon after leaving a large meadow. The topo. map makes it look like about .2 miles. As it turns out, the cairn is in the western part of the meadow and it is about 3 feet tall. If you are climbing in the summer months, you will find the cairn in the middle of a field of large leafy plants (towards the western side of the meadow). The trail then leads up to some rocks that look like they could be part of a waterfall during runoff.

3. Southwest Slopes Route - The shortest route up Mount Massive is only 6.2 miles roundtrip with a 3,870 foot elevation gain. This route is approached via the Halfmoon Creek Trailhead. It is a class 2 trail on slopes to 35 degrees.

4. Southeast Ridge Route - A variation of the standard route, cutting up the prominent ridge to point 12,381. It is 11.4 miles round trip and requires some routefinding through the trees to obtain the ridge.

5. North Ridge - This class 3 ridgeline is climbed from the Windsor Lake trailhead north of Mount Massive. It is 11.8 miles roundtrip with a 4,660 foot elevation gain and follows the fold of the continental divide.

6. Northeast Slopes - This long route has some routefinding involved and is 14.2 miles roundtrip. There is a permanent snowfield that must be crossed near the top, so outfit yourself accordingly. Access is via the Native Lake trailhead on the northeast side.

7. East Ridge - This remote route involves class 2 hiking and is 11.7 miles roundtrip. Access is via the Native Lake trailhead on the northeast side.

8. Tour de Massive - This tour of all 9 of Mount Massive's summits is significantly harder than just the main summit. It can be done from any of the 4 trailheads. This route describes the tour from the North Halfmoon Creek Trailhead.

9. Willow Creek/East Slopes - This is the standard winter route up Mount Massive. See this page for more info

Regulations:
1. Group size must be limited to 15 members.
2. All pets must be leashed.
3. Blue bags must be used, and Leave No Trace ethics must be observed.

Several Colorado wilderness areas now require a free user permit to be in the wilderness, or shortly will require same. The wilderness areas are Holy Cross, Maroon Bells/Snowmass, Mount Evans, and Mount Massive. Permit tags are available at trailheads and are a two part tag. The white part goes in the box provided and the card portion is to be attached to the outside of your pack. There is currently no penalty if one does not have a permit. However, large fines could be levied within a few years for non-compliance. The preferred method now for dealing with violations is education of the users.

The optimal time to climb Mt. Massive is June through September, depending on snow and weather conditions. Winter and spring ascents are done occasionally, especially by ski mountaineers. It seems like the west face of Massive is actually very seldom visited in winter due to the long distance to get there in winter. The east face route is actually the normal route in winter, and can be approached from more than one direction.

One route is from the Fish Hatchery, and in winter, this may be the most used route. Another route is to follow the closed road from the closure to the summer trailhead and climb the standard Colorado Main Range Trail. The shortest option seems to be the route up Willow Creek. Keep in mind that the dirt road past Colorado 300 is not plowed during the winter. You will need a four wheel drive with tire chains and good snow conditions, snowmobiles, four wheelers, or skis to get to the trailhead.

Like all winter mountaineering objectives, careful consideration of snowpack stability must be given before attempting a winter ascent of Mount Massive. The slopes on the west face are very near the optimal avalanche slope. Bring standard winter gear like an avalanche probe, shovel, transceiver, sleeping bag and pad, and a knowledge of how to build a snow cave and dig and analyze a test pit. The west face is reported to be an excellent ski or glissade descent. 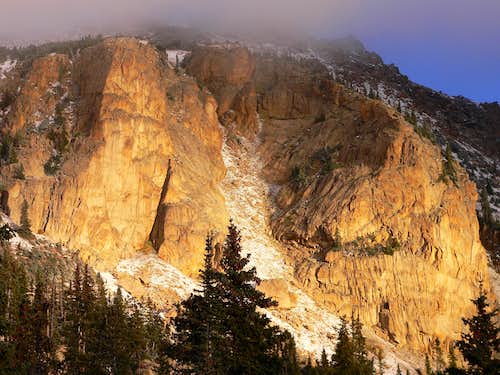 The Elbert Creek campground is right across the road from the Mt. Massive and Mt. Elbert trailheads. The cost to stay here is approximately $7 a night. There is an attendant in the first space to help you sign in and they are good at answering questions. More about the site is in The Best in Tent Camping Colorado by Molloy. Availability is usually good.

Half Moon campground is before you get to the Elbert Creek Campgroud. It is larger in size, but further from the trailheads.

My TR of Mount Massive via Halfmoon Creek

Winter and spring ascents are done occasionally, especially by ski mountaineers. The normal route is the west face via the Halfmoon Creek Trailhead. It seems like the west face of Massive is actually very seldom visited in winter due to the long distance to get there in winter. The east face route is actually the normal route in winter, and can be approached from more than one direction. One route is from the Fish Hatchery, and in winter, this may be the most used route. Another route is to follow the closed road from the closure to the summer trailhead and climb the standard Colorado Main Range Trail. The shortest option seems to be the route up Willow Creek. Hope this is helpful. Scott

In the "getting there" portion you say that the closest airport is Denver International. I feel its worth mentioning here and in the Mt. elbert description mentioning Leadville Municipal Airport which is the highest public airport in the US at 9927ft. Although you cannot "buy" a ticket to get there, my dad an i fly into there all the time. So for those who want to climb in the area and have access to a private or charter plane, leadville airport is a way better place to fly into.

I climbed Mt Massive in July, 2017. I started at 3AM, so finding parking wasn't an issue. But if you get there later in the day, you might have a problem finding close parking. The trail is well-defined. The first part of the hike is fairly long--it leads you through a forest for several miles. This part of the trail is almost flat, with minor elevation gain and loss. Eventually you reach a fork in the trail and start climbing. You'll eventually pop out into a wide expanse of hill. The trail is partially paved with stones. The mountain still had a considerable amount of snow on it, but the trail was clear. Some parts of it were soggy but not enough to slow you down. You'll reach a saddle where the trail branches. From here, you will have to do some scrambling over large boulders to the summit. On some parts, you can choose between more or less difficult routes. I wasn't able to find a registry on the summit. There are fantastic views in every direction--especially to the east. It took about four hours to summit. I only spent a few minutes on the top and headed back. About an hour later, clouds descended on the mountain and it rained/snowed a little, then cleared up. Overall, an excellent and not too strenuous hike.