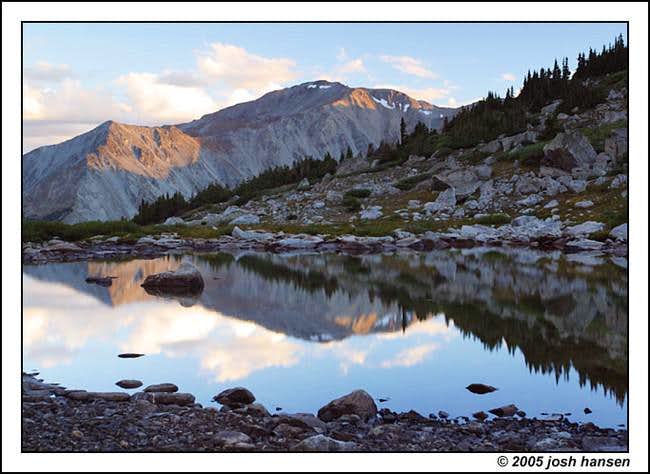 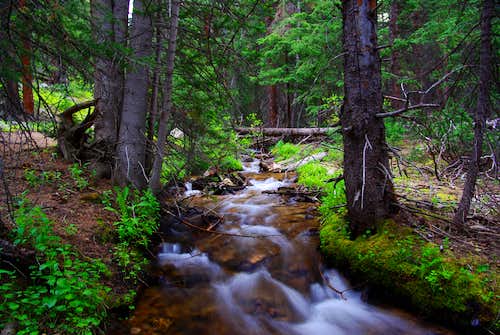 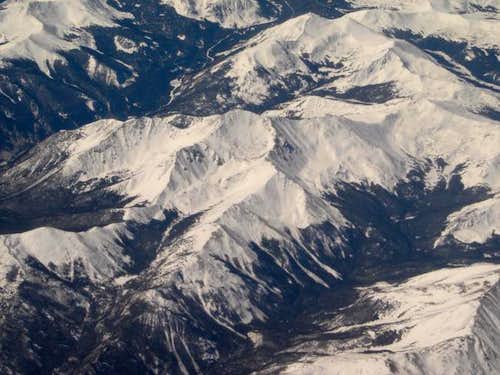 Mt Yale from the air
by SP member habaceeba

Mount Yale and its 14,202-ft. of talus rests within the backbone of the Colorado Continental Divide, the Sawatch Range. This complex range stretches nearly 100 miles north and south, starting at Tennessee Pass and ending at the Marshall Pass area. The Sawatch is home to 15 fourteeners and 14 centennial thirteeners; no other Colorado mountain range contains as many peaks above 13,800 ft. When hiking this range, there are a few things you can count on, long approaches, plenty of vertical, and endless class 2 hiking. Mount Yale is the eighth highest peak in the Sawatch Range and twenty-first in the state on Colorado. Driving through the Arkansas Valley Mount Yale is hard to pick out since there is a ridge extending to the east covering the view of the summit. The peak is located due west of Buena Vista.

Mount Yale received it's name from J.D. Whitney, which he named after his almamater in 1869. Whitney (head of the Harvard School of Mining), W.H. Brewer and C.F. Hoffman of the California survey along with students from the first class to graduate from the Mining School went to Colorado to survey the peaks for two reasons, first to give the students practical work and second to investigate the rumor that these peaks, Harvard, Yale, Princeton, and Columbia, were higher than the peaks in California.

All of Mount Yale's routes are class 2 hiking which allows even the novice hiker an attainable summit. Keep in mind, Yale is in the Sawatch Range, and one should expect the normal 4,000 ft. of elevation, so be in shape. Also, expect to see a few hikers around, because the standard Southwest Ridge via Denny Creek route is the most popular route. Part of its popularity can be attributed to a paved road all the way to the trailhead.

The mountain and 167,414 acres of the surrounding area were designated the Collegiate Peaks Wilderness by Congress in 1980. Its the fifth largest wildernesses in the state behind Weminuche, The Flat Tops, Sangre de Cristo and Maroon Bells. Within its boundaries there are more fourteeners and high peaks than in any other wilderness area in the lower 48 states. The wilderness has 8 peaks over 14,000 feet in elevation and they are

The wilderness is also host to five century peaks.

The wilderness runs along a 40 mile stretch of the Continental Divide, and probably possesses the highest average elevation of any wilderness in the lower 48 states.

GETTING TO THE TRAILHEADS

Getting to Yale's trailheads are easy, neither one of the two trailheads require a high clearence vehicle.

For the Southwest Ridge via Denny Creek Trailhead (sometimes refered to as the Mt Yale TH) turn at the only stop light in Buena Vista and go west on Chaffee County 306 (Cottonwood Pass Road) for 11 miles to the Collegiate Peaks Campground and continue 1 mile to the Denny Creek TH on the right. The road is paved. Plenty of parking and well signed. Cottonwood pass road is open in winter to the trailhead.

The Avalanche Gulch Trailhead, to access Yale's east ridge starts at 9,300 ft. Follow the Cottonwood Pass rd for 9.1 miles to the signed parking on the right. This trail is accessible in the winter as well. This approach to Yale is a little longer but avoids the crowds on the southwest ridge route.

The North Slopes starts at the North Cottonwood TH, which is the main trailhead for Harvard and Columbia, From Buena Vista turn west onto County Road 350 (Crossman Ave). This road is on the north side of town near the Motel 8. From here drive west until the road ends turn right (north) onto County road 361, follow this road through one bend and turn left (south) onto County road 365 at the second bend in the road
, you will almost do a 180 degree trun on to rd 365 from here stay on the road as it turns to the west to the trailhead parking area.

As for National Forest Campgrounds Collegiate Peaks campground is just a few hundred feet down the road from then Southwest Slopes trailhead.

For more information on this campground and others in the area go to F.S. Salida Ranger District or make a reservation here

Cottonwood Hot Springs has a lodge and is only a few miles from the Southwest Ridge trailhead.
Cottonwood-hot-springs.com

Both the Southwest Slope and the North Slope routes have large parking areas in which you could car camp from.

Mount Yale makes for a great day trip. The approach is a piece of cake and the route is straight foward. You can never start too early hiking mountains. A good rule to follow would be to start all mountain climbs by 6:00 a.m. or earlier. Don't be one of those people that get the late start at 9:00 a.m. and wonder why the clouds are building so early. Start very early and avoid afternoon thunder.

All elevations in Colorado have been revised.

Here's one thread on the matter, and I think there are a few more if you search:

Thanks for the information, i was unaware of this.

I may be wrong but many credible sources (including the Roach guide) have cited the elevation of the summit as 14,196.

I would think it's acceptable to useone of the two elevations until all the maps, ect... are converted to the updated elevations, and that could be a while.