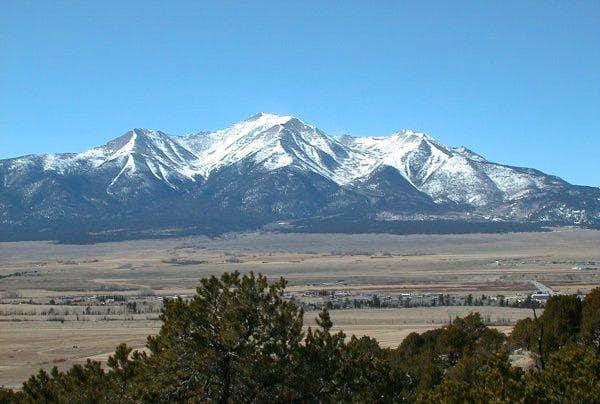 Looking west across the Arkansas Valley at beautiful Mount Princeton

The southern most of the Collegiate Peaks, Mount Princeton, Colorado's 20th highest, dominates the skyline of the Arkansas Valley. This 14,000 foot peak abruptly rises west of Buena Vista and stands all alone in the Sawatch Range. This summit towers between two large U-shaped glacial valleys in which Chalk Creek and Cottonwood Creek drain into the Arkansas River. Mount Princeton is easily attainable from its eastern ridge, but also offers more challenging routes from all slopes. Lacking in technical routes, except for the Chalk Cliffs, the views from this peak won’t disappoint.

The small 13,300 foot sub-peak on Princeton’s eastern ridge a.k.a. “Tigger Peak” offers one of the best views of the Arkansas Valley in the Sawatch Range. This short easy hike is highly recommended.

In 1869 Professor Josiah Dwight Whitney led a group, including two surveyors from the California survey and four of his students attending the Harvard Mining School, to what are now the Collegiate Peaks. The goal of the survey was to give the students practical work and to investigate the rumor that peaks in central Colorado were higher than that of California. Originally called Chalk Mountain by the Wheeler Survey, the name Mount Princeton was believed by the USGS, to be given by one of Whitney’s students, Henry Gannett.

The Sawatch Range is a large and expansive north-south mountain range, spanning over several miles from the Eagle River, in the north, to Poncha Pass in the south. Due to its fifteen peaks that reach above 14,000 feet above sea level, it is called by some “the backbone of the continent”. This range evolved during the Sawatch uplift where a broad faulted fold was sliced in two by the Rio Grande Rift located at the present day Arkansas River. The eastern half of the Rift produced the glacier-less Mosquito Range while the western half became the glacier filled Sawatch Range. The northern section of the Sawatch Range is composed of Precambrian rock, dating back to 1.75 billion years. The southern segment of this range, including Mount Princeton, consists of younger igneous rock. Approximately 65 million years ago, during the Laramide Orogeny, this igneous rock melted and forged as hardening molten magma.

The Chalk Cliffs or the “White Cliffs” on the lower southeast face of Mount Princeton are made of kaolinite. This rock consists of a soft chalk-like substance formed by leaching hot water rising along the faults. Mount Princeton Hot Springs Resort is located in the lower portions of this valley and includes two hot springs pools and numerous pools along Chalk Creek.

GETTING THEREAll the trailheads are accessed from US 285 in the Arkansas Valley from Buena Vista via the Cottonwood Pass Road in the north to the Mount Princeton Hot Springs turn off or Chaffee County Road 162 in the south.Getting to Mount Princeton's standard or east slopes is harder than it appears, but once on the 4wd road your route finding is over. Turn west on Chaffee County 162. At 4.4 miles, turn right (north) onto Chaffee County 321 veer to the right at the T-intersection and now heading east for a mile until the road eventually turn to the north. Once heading north drive about half mile and there will be another intersection, turn left (west) on to the start of the Mount Princeton Road. Cars can travel another mile before the road requires a high clearence vehicle. From here the road is steep and narrow up to the small parking area at the radio towers (11,000 feet). The road actually continues from here all the way to a small cabin at timberline but finding a place to park is difficult. Get there early since there are only a few good spots at the radio towers.For access to the southern slopes or Grouse Creek go here.For the Maxwell Gulch route then go here. This ascends up Mount Princeton's northeast slopes.USGS 7.5' map - Mount Antero Colorado
WHEN TO CLIMBMount Princeton makes for a great day trip, and the climbing season usually runs from June through September. You can never start too early hiking the mountains of Colroado. A good rule to follow would be to start all mountain climbs by 6:00 a.m. or earlier. Don't be one of those people that get the late start at 9:00 a.m. and wonder why the clouds are building so early. So start at sunrise to avoid the always threatening afternoon thunderstorms.The image below is a plaque placed a couple hundred feet below the summit. It's in memory of Catherine Pugin, an avid Colorado outdoors-woman who was struck by lightening and died on that spot in 1995. This humble memorial serves also as a reminder that high-altitude endeavors like 14er bagging can be deadly, no matter what your experience level.Winter ascents are possible via the east slopes but one needs to be up to date with the avalanche forecast and should have adequate training. The road will be closed and an additional seven miles round trip will need to be added from the summer 4wd trailhead.
CAMPING AND LODGINGAs for National Forest Campgrounds there are three campgrounds in the area that are near the east and south slopes of Mount Princeton (Cascade, Chalk Lake and Princeton).For the northern slopes then Cottonwood Creek Campground would be the nearest.For more information on these campgrounds and others in the area go to Chalk Creek Canyon Campsites and Cottonwood Creek Campsites or make a reservation hereAs for lodging: Buena Vista has numerous hotels.
or
Mount Princeton Hot Springs is very nice and has a hotel in which one should indulge in the guilty pleasures the Hot Springs have to offer after a long day hiking. mtprinceton.com
RED TAPEMount Princeton is the only Collegiate Peak not located in the Wilderness Area so there are no permits required, and no use, summit or parking fees to climb Mount Princeton.
MOUNTAIN CONDITIONSFor current mountain conditions contact the Pike & San Isabel National Forest contact: Salida Ranger District office 325 West Rainbow Blvd., Salida, CO 81201 (719) 539-3591.
HONORABLE MENTIONThis mountain was made posible by its former maintainer. rfbolton
External Links

Agreed... until the new data are published on some maps, it doesn't make sense to update some of the 14ers and not the others. It only skews the elevation data toward a select few peaks. Better that we at SP consistently use one set of elevations, given that *no* new information is available for 99% of peaks in CO.

There's the Gunsmoke Cafe off 285 near the prison, get the Mr Ed plate. I think that's what it's called. Basically this huge enchilada topped with an egg and sour cream and lotsa sauce. Very good.
Otherwise head to Salida as there are more options(more people). Don't recall the name, but Salida has a microbrew that serves beer and pizza.

For a visual of the current weather conditions, visit the Collegiate Peaks web site, which normally features a webcam focused on Mount Princeton

As you are aware, the new elevation is 14,204. Should be consistent with other pages (I noticed that Mt. Elbert & Mt. Yale have been changed).

Here are all the 14ers that should be updated (haven't checked to see which ones have been done already):

Agreed... until the new data are published on some maps, it doesn't make sense to update some of the 14ers and not the others. It only skews the elevation data toward a select few peaks. Better that we at SP consistently use one set of elevations, given that *no* new information is available for 99% of peaks in CO.

Does anyone know why most sources list Princeton as the 20th highest, but in the Roach (2011) book it's listed as the 18th highest? Thanks in advance for help.

Note that several Fourteener elevations have changed by a few feet per the most current survey. Mt. Princeton is now at 14,204 feet. You can find current elevations at the Colorado Geological Survey. Most of the changes increased the elevations by a few feet. With the new list, Crestone Needle is the only one at 14,197 feet, putting it at #22. Mt. Princeton in the #19 position. Happy Trails! - TJ Burr, 6/8/2018

The latest "official" survey places Mt. Princeton at 14,204 feet - 7 feet higher than previously measured. I'm going to try for the summit on 6/15/2018. I drove by it yesterday. Not much snow. Happy Trails!

Note that several Fourteener elevations have changed by a few feet per the most current survey. Mt. Princeton is now at 14,204 feet. You can find current elevations at the Colorado Geological Survey. Most of the changes increased the elevations by a few feet. With the new list, Crestone Needle is the only one at 14,197 feet, putting it at #22. Mt. Princeton in the #19 position. Happy Trails! - TJ Burr, 6/8/2018