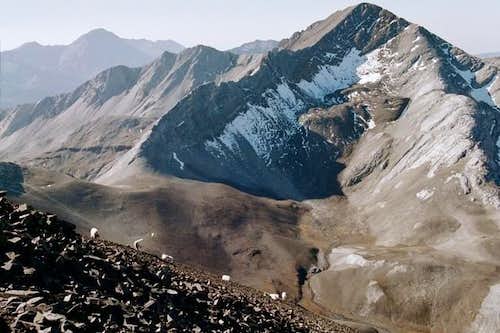 The northeast side of Cusick Mountain from North Imnaha.
At 9,518 feet, Cusick Mountain is the tenth highest named peak in the Wallowa Mountains. Its spectacular glacial horn forms a triple divide separating the headwaters of the West Fork Wallowa River, and the Middle and South Forks of the Imnaha River. It anchors the south end of the Wallowa/Imnaha divide, but unlike most of the peaks along this ridge system, it is composed of more limestone and thus lighter in color. Much of this limestone has been metamorphosed into marble. The darker shale of the Hurwal formation is present however, from the summit down portions of the east and west slopes. And the basalt dikes that slice through the bedrock of most the Wallowa peaks also find this one. This area is included in the Eagle Cap Wilderness of the Wallowa-Whitman National Forest.

There are several features contributing to the grandeur of this mountain. It is probably the most remote of the larger Wallowa peaks, with the nearest trailhead being approximately 13 miles away, not including a couple more miles of cross country scrambling. This remote placement contributes to few visits as indicated by only 6 summit entries in 2004. The snowfields of Cusick are extensive and neoglacial moraines massive. The base to the top of the moraines is approximately 600 vertical feet. The high hanging basin below the north side is virtually treeless with braided stream channels and extensive mats of 1 inch tall willows. It looks more like Alaska than Oregon. In the opinion of this hiker, this may be the most beautiful of the Wallowa peaks.

Cusick Mountain was named for William C. Cusick who was a farmer/botanist from nearby Union. Cusick spent many years around the turn of the last century conducting botanical surveys of the Wallowa Mountains. In doing so he discovered many new species and laid the foundation for what is known floristically for these mountains. In his honor, many plant species in the northwest are named for him. Due to the geologic history and geographic location, the Wallowa Mountains are one of the most botanically unique regions in the U.S. with a number of regional and global endemic species. 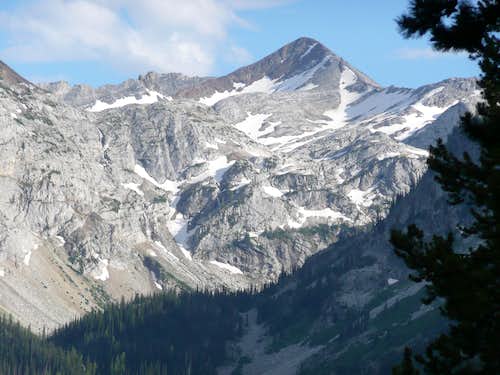 The north side of Cusick from the West Fork Wallowa River. Photo by cascadetravler
The shortest route to Cusick Mountain may be via the West Fork Wallowa River trail (1820). From the trailhead at Wallowa Lake to Hawkins Pass is 12.8 miles, but tack on about 2 more miles of cross country from the pass. Those going through the Lake Basin to Hawkins Pass will find it 15.5 miles and 21.6 miles via the Two-Pan and East Eagle trailheads respectively. Another route from the East Eagle trailhead goes by Crater Lake and then north into the headwaters of the South Fork Imnaha River and requires 16.3 miles to Hawkins Pass. A final route from the Tenderfoot trailhead covers approximately 10.5 miles to Polaris Pass followed by approximately 3 to 4 miles of cross country across the ridge to the south. Intermittent goat trails aid in these last few miles.

To obtain route numbers and road access information to these entry points, stop by the Forest Service offices in Enterprise, Halfway or Baker City to obtain the appropriate maps or instructions.

The mountain itself can be climbed via the north ridge, the east face and from the Hawkins Pass vicinity. Technical climbs can be found on the north face and east ridge.

A free wilderness permit is also required for overnight trips. These are available at the trailheads and a copy needs to be attached to your pack.

Excellent camping can be found in many places along any of approach routes. Check the information boards at the trailheads for restrictions. Generally these prohibit camping within 200 feet of lakes and streams, but regulations can vary slightly in different places. 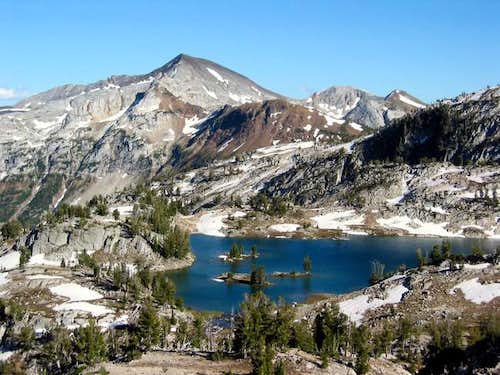 The west side of Cusick from Glacier Pass. Photo by Cornvallis
Current mountain conditions can be obtained from the US Forest Service visitor center, (541) 426-4978.