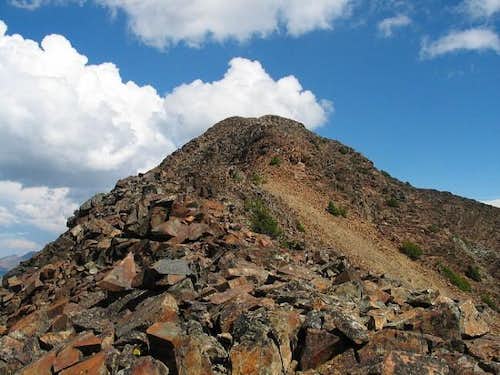 Red Mtn. is the highest peak in Baker county Oregon and is part of the Eagle Cap Wilderness area. It is one of many northwest peaks named Red Mtn. but when you stand on top of it you can easily see why it got its name.

It is popular in the fact that it is the highest point in Baker county and attracts those who aspire to climb all of the county highpoints in the st ate of Oregon. It doesn't require much in the way of technical skill but is a difficult scramble, as the upper thousand feet or so is totally loose. Not a lot of solid ground and care must be taken as to foot placement as it would be easy to break or turn an ankle as the stuff shifts underneath you. The best aspect of the climb is achieved when you reach the ridgeline and are blessed with a nice ridge walk that takes you to the summit, a lofty viewpoint that gives you a superb 360 degree panorama of the Eagle Cap wonderland.

Just north of Baker City Oregon as you travel on I-84, take the exit for OR 86 and head NE towards Richland. A few miles beyond Richland but before you would get to a small town called halfway, start looking for FR77 on the left. You will find yourself on a well graded dirt / gravel road that quickly ascends into higher country. You'll pass the McBride Campground, where FR 7715 branches north. Follow FR 7715 to its end at the Summit Point trailhead.  A route page of the way we went is found in the route section to the left.  Also, a trip report that briefly describes our visit can be found HERE.


Another route to access Red Mountain is described in William Sullivan's book " 100 Hikes in Eastern Oregon" Go to Hike #72 and follow his directions for accessing Crater Lake (Red Mtn can be reached from here by hooking into the trail that comes from Summit Point. This route is shorter in length but requires a lot more driving to reach the TH. I'll quote his directions as follows
"From I-84, take exit 302 onto highway 86 toward Richland 23.2 miles. At a pointer for Sparta just beyond mp 23, turn uphill to the left on gravel Sparta Lane for 4.9 miles. Then turn left on East Eagle Creek Road for 5.8 miles to a 5 way road junction. Veer right on Empire Gulch Road 7015 for 4.8 miles and cross a bridge to a T-shaped junction. Turn leftr on road 77 for 2.8 miles and fork to the right on East Eagle road 7745 for another 6.4 miles. After you pass the Eagle Creek Trailhead for horse trailers sign, continue straight ahead for another 0.8 mile to a parking turn around loop at the end of the gravel road. Park here and look for a small sign for the Little Kettle Creek trail on th e uphill, right hand side of the loop. Follow this trail up through this trail up through the forest about 200 yards to a junctionwith the horse trailer TH trail and start switchbacking uphill. Aat 3.5 miles you'll crest the lip of a hanging valley and cross a small creek. The trail continues up eventually reaching Crater Lake at 5.9 miles." Red Mountain is just across the valley. Elevation gain from the TH to Crater Lake is almost 3000 feet. OK, whew, I hope you got all that. If I ever go back (doubtful at this point in time), I'd give this route a try.

I have put up a route page for  the Summit Point trailhead in the section for routes on the left side of this page but of course there are other ways to access this mountain in addition to it and the Sullivan route described above.  Caleb Morris came in via Eagle Creek and he has a brief trip report on peakbagger.com.  A mention of a route from Norway Pass was touched on by Michael Wanberg on peakbagger.com on his trip report. His visit was in Sept of 2014.  Another 2014 visit via the Summit Point TH is described in detail by Jeff Carr and it is also on peakbagger.com and you can find it HERE.

The county highpointers website also has several trip reports of visits to this lonely peak and I'd check all the resources that are available on this one as well as
taking good maps and GPS waypoints to help you on this one as a snowstorm or fog could change your bearings.


There is a register on the peak that dated back to 1977 but you can also find a listing of those who have been to the summit of this one by checking the register log found at peakbagger.com or at Lists of John.  To see the one at Lists of John requires that you are a supporting member of that site.

Fill out the free wilderness permit at the trailhead and attach a copy to your pack. I don't recall that a NW trailpass is required although it is always a good idea to have one. 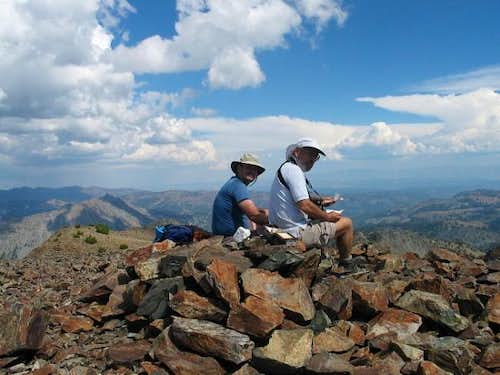 The best time of year to climb would be after the snow melts off of the trail so June through late October would be my choice. However, snow doesn't stop serious hiker /climbers and the snow actually could make the talus slopes more compatible as long as there isn't any avalanche danger.

This makes for a long hike, close to 18 miles round trip with a total elevation gain (counting the ups and downs) of about 5100 feet. It can be done as a day trip or as an overnight backpack trip. 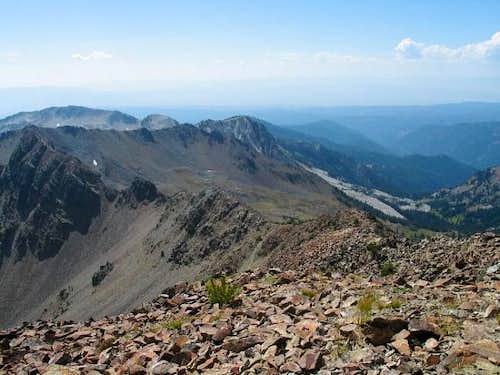 Camping is allowed at Crater Lake (keep 200 feet back from lake) and I also saw several other spots that would make good camp spots about 7 miles in. As you can tell from the attached pictures, camping can be done in all seasons and Crater Lake makes a good base camp.

Baker City is the nearest place that has a local weather report for its area and while this isn't exact since it isn't Red Mtn, it will give you an idea of what the weather in the area may be like.

Since the time/temperature link seems to be down a lot lately, click
HERE for Baker City weather conditions

With the help of Wikipedia, I was able to find some of the following information out about this county:

The county was named for Edward Dickinson Baker, a senator from Oregon who was killed at Ball's Bluff, a battle of the American Civil War. It was split from the eastern part of Wasco County. The county seat of Baker County is Baker City. As of 2000, the population is 16,741.

History
The first groups from the eastern United States interested in settling in Oregon only paused in the area on their way to the Willamette Valley, unaware of the potential wealth they passed over. At Flagstaff Hill, near Baker City, 15 miles of wagon ruts left by immigrants can still be seen.

In 1861 gold was discovered and Baker County became one of the Northwest's largest gold producers. The Blue Bucket Mine, a mythical rich vein of gold, is part of the folklore from this period.

On September 22 of the following year, the state assembly created Baker County from the eastern part of Wasco County. Later, Union County and Malheur County were created from this county. The boundaries were adjusted for the last time in 1901 when the area between the Powder River and the Wallowa Mountains was returned to Baker County.

The original county seat was at Auburn. While at first a booming mining town with 5,000 inhabitants, once the gold was mined out Auburn's population dwindled, and county citizens eventually voted in 1868 to make Baker City, incorporated in 1874, the new county seat.

Economy
Gold mining was the original impetus for settlement in the area, and at one time the county was the largest gold producer in the Northwest. With the exhaustion of the gold fields, agriculture, stock raising, logging became the primary economic pursuits. In the last decades of the 20th century, tourism also contributed to the local economy, helped by attractions that include the Eagle Cap Wilderness Area, the Hells Canyon Recreation Area, and Anthony Lakes Ski Resort. The National Historic Oregon Trail Interpretative Center has drawn numerous visitors since its opening in 1993. 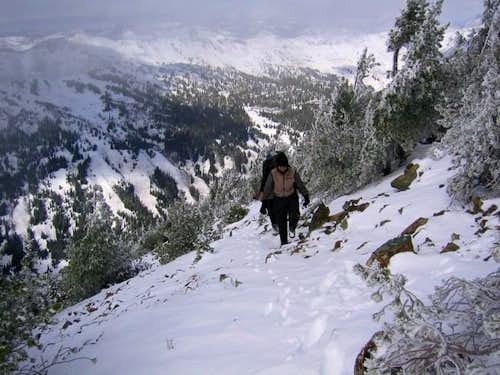 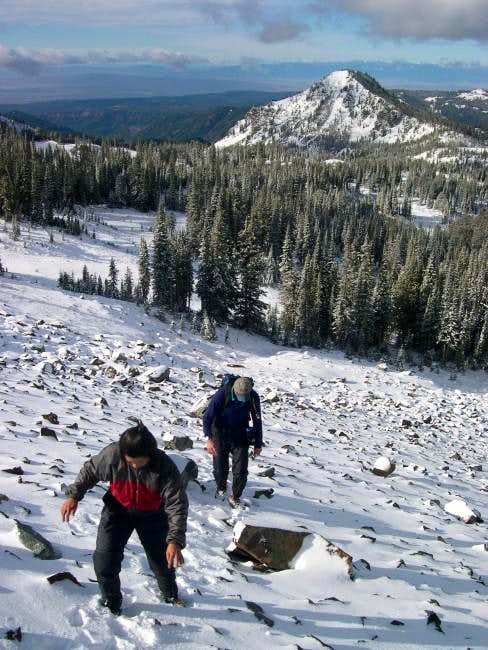 Hiking or climbing in a mountain environment has many risks. Any who choose to participate in such activities must assume the responsibility for their own actions and safety. Any information provided here cannot substitute for your own sound judgement and decision making skills. For example, hiking into an electrical storm or during an electrical storm is reckless and dangerous. It is not my intent to describe every risk (weather, rockfall, animals, accidents, etc) that you may encounter on visiting this area but the author of this page is not responsible for your safety. You need to be prepared for the unexpected and proceed accordingly. This peak is in a very isolated part of Oregon and you may be the only one(s) in the area at the time of your visit. Do not expect cell phone coverage. All risks are assumed by the participant(s). Having said that, I wish you a great trip into this relatively unknown area but exercise care and caution to make your visit a safe one. 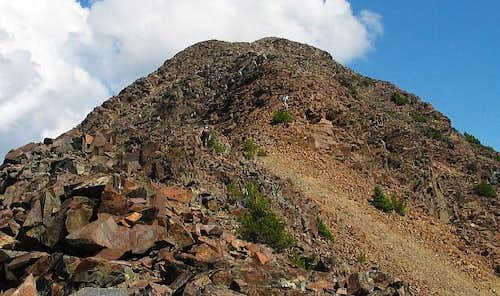