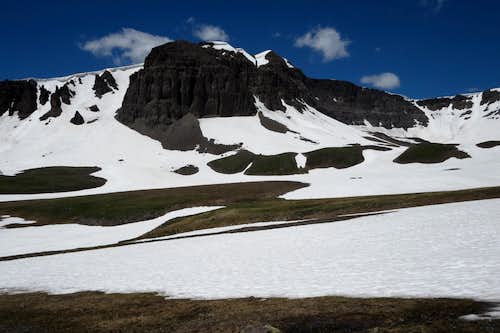 Basin at the Head of Frontier Creek
More than 30 miles from the closest town and paved road, well into Greater Yellowstone's largest and broadest mountain range, atop an otherwise-unremarkable flat summit, is a mysterious feature that only a collective few have ever seen: the Devils Graveyard. It is a collection of stones set perpendicular to the ground amid the tundra. Yes, they look like gravestones. Some look so much like gravestones that standing there, especially alone, is downright eerie. But they were not set that way by people. No one seems to know how they ended up the way they are, but the formations are natural.
Although the name is associated with a peak, the Devils Graveyard is actually a feature of a peak.
If you go out with a map looking for the Devils Graveyard, there is a good chance you will fail. This is because the map is mislabeled. The peak on the Emerald Lake quad labeled as Devils Graveyard is not the actual location of the site. Instead, the next peak north from it, an unmarked peak with an interpolated elevation of 11,580', is where you will find the stones. 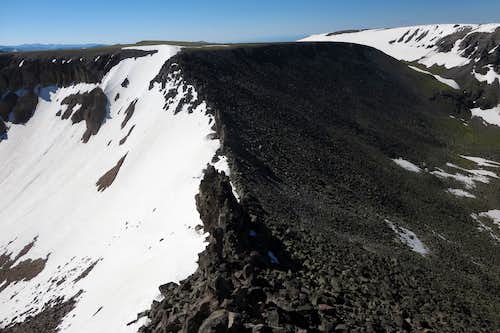 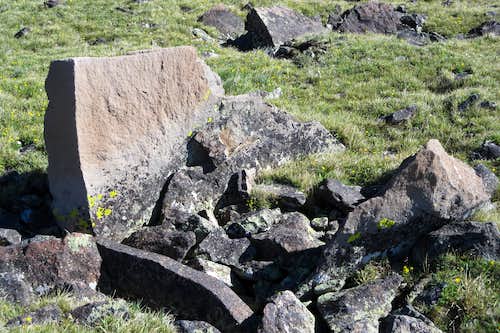 A Devil's Gravestone
The "graves" are not the only attractions, though. The scenery is fantastic, for you are in a truly remote area and surrounded by alpine peaks in all directions. Younts Peak and Thorofare Mountain, the former being by some accounts the most remote peak in the Lower 48, seem tantalizingly close even though they are still more than 10 miles away. A ridge walk north or south will provide views of alpine gems such as Green Lake, Emerald Lake, and Snow Lake. You can see the Tetons. And you can see Gannett Peak, the highest in Wyoming. 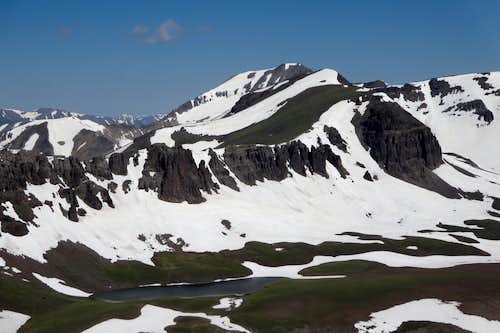 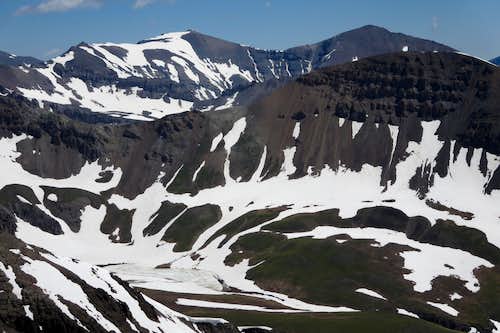 From Main Street in Dubois, turn north onto signed Horse Creek Road. Drive past the residences and through a section of the Dubois Badlands. After several miles the road enters national forest land and becomes unpaved. Pay attention to signs and keep following the principal road to Double Cabin Campground. Drive past the campground to a large open area. Find the trailhead and sign. You will want to head up Frontier Creek. This is 25 miles from Dubois. In dry weather, these roads are easily passable to most passenger vehicles. 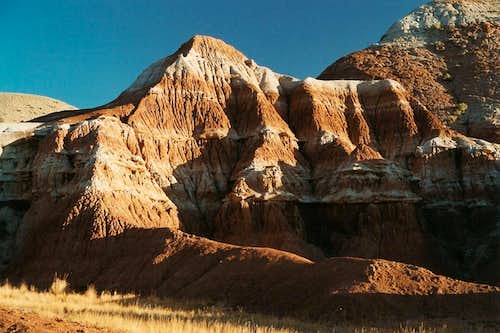 Dubois Badlands
It's actually easier to get onto the right trail by picking up a trail just across the road from the campground entrance. Regardless, you are going to be crossing Frontier Creek and heading up the canyon on the right (east) side of the creek.
Frontier Creek can be challenging to cross before July and in the afternoon.
Have plenty of water. After crossing Frontier Creek, the trail is not often close to it and frequently is well above it. 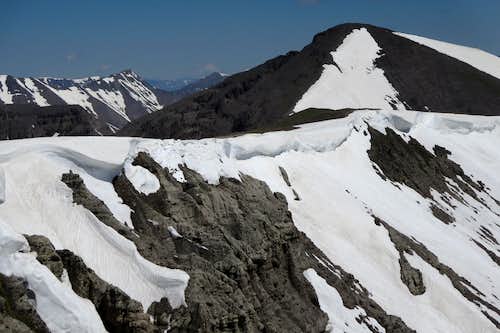 Peak 12,025
There are four principal ways to get to Devils Graveyard. All are long and/or arduous. 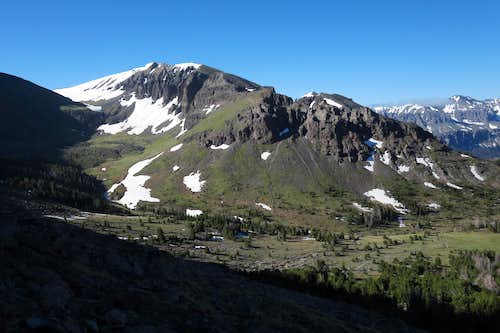 Looking back down into the basin where the trail disappears

About 8 miles up the Frontier Creek Trail, there is a petrified forest on the west side of the creek. It is very difficult to see any petrified wood from the trail, so if the creek is low enough, cross it and go check the site out. Be aware that it is illegal to remove any petrified wood. 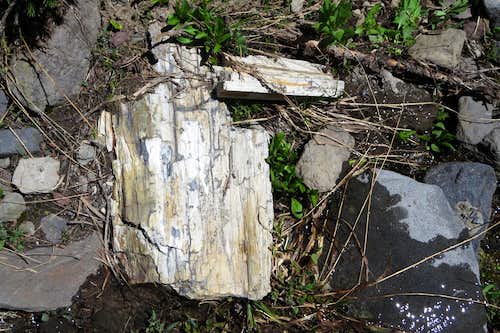 Obey posted wilderness regulations.
This is grizzly country. Carry pepper spray.
Leave an itinerary with someone and carry extra food and water on you. I could not get a cell signal on the summit, and the off-trail portions of these routes are remote and seldom traveled; getting injured with no backup plan could turn out to be disastrous. 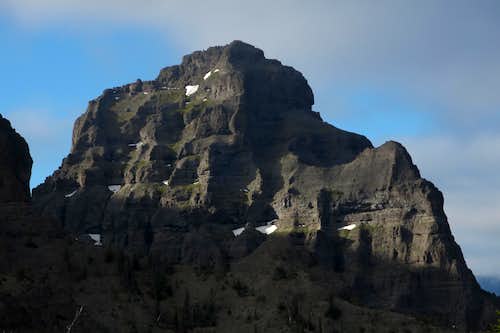 Late July and August are best for water and snow levels. 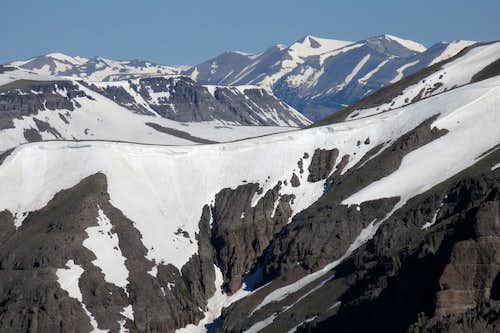 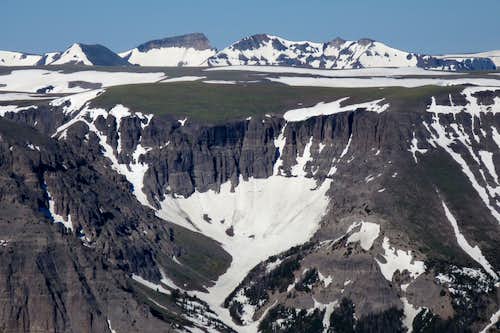 The meadows along the trail make excellent campsites. My friend and I camped in a sweet spot by the creek near the old pack trail.
Developed sites are available (for a fee) at Double Cabin CG. Many people do dispersed, free camping in the trailhead area. 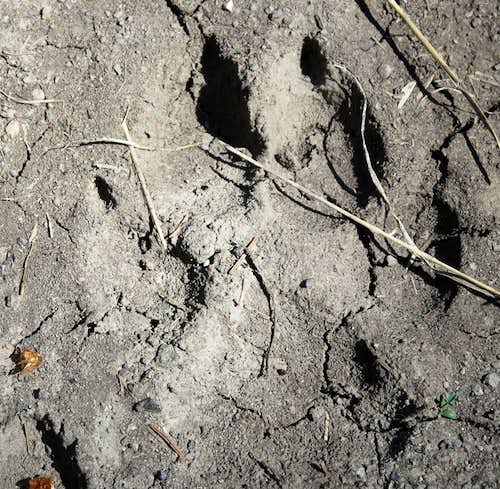