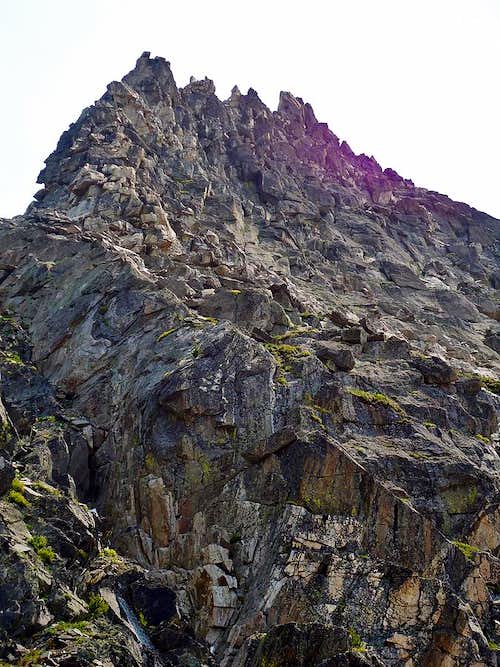 At 11,206 feet, Mount Cowen is the highest peak in the Western Beartooth Mountains. Despite its prominence it is a relatively obscure peak unless viewed from other high points. It is hidden behind high ridges from most angles and the shortest approach to climb it is about 10 miles one way with nearly 6,000 feet of elevation gain. Most people do the peak as an overnight trip but a strong hiker could do it in a day.

The Mount Cowen massif is home to nearly unlimited mountaineering potential. Steep snow climbing, rock scrambling, skiing and technical rock climbing abound. The Mount Cowen massif is solid granite and gneiss, which may have you thinking you are in the Tetons or southern Wind Rivers as you climb. Just south of the main and south Cowen summits are four satellite spires: Eenie, Meenie, Miney and Moe. These towers offer technical climbs up to at least 5.11. Steep couliors separate nearly all the spires of the Cowen massif, offering ice and snow opportunities even into late season. Odds are Cowen has something to slake your mountaineering thirst!

Getting There and Hiking/Climbing Information

The trail follows the south side of the valley for 1.5 miles then crosses Mill Creek on a bridge. Turn left at the trail junction, which has a sign saying Elbow Lake is 6 miles ahead. From here the trail climbs steeply from 6000 feet to the top of the ridge above Elbow Creek at 8300 feet. The trail then drops about 400 feet to Elbow Creek, which does not have a bridge over it as of July 2012. There are at least three nice big trees laying across the creek that you can cross, although they will be very slick if it has rained recently, which was the case when we hiked out from the lake. When we were there the water was about calf deep if for some reason you needed to ford it.

From the creek crossing the trail climbs toward Elbow Lake, which sits at about 8600 feet. The trail gets a little bit rocky and marshy as you approach the lake. It follows the creek up to the lake, which has many excellent campsites on the south side. 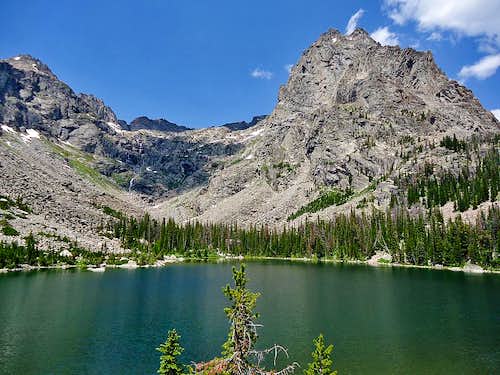 Elbow Lake, with the SE end of the Cowen massif towering above.

The standard route up the mountain begins from Elbow Lake. You can skirt either shore of the lake to get around, but you are aiming for the boulder and grass covered slopes between Cowen Falls (the obvious massive cascades NW of the lake) and the walls of Eenie and Meenie. Climb these slopes, passing through one steep gully then up more slopes. You are aiming almost directly north, although the terrain will require plenty of zig zagging around obstacles, like giant boulders and class 5 ledges. You will most likely run into a few class 3 moves along the way. 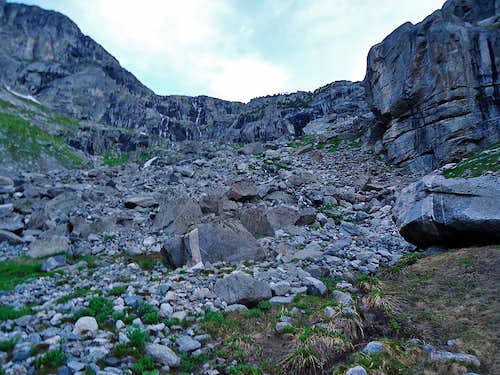 Terrain along the approach to Cowen.

The angle of the terrain lessens as you get higher up. Your target to begin the climb of Cowen is the small lake at 10,300 feet directly below Cowen (probably not even shown on any maps). There was no lake when we were there, only snow, but it will be obvious when you see a big perfect bowl of snow early season or water in late season. 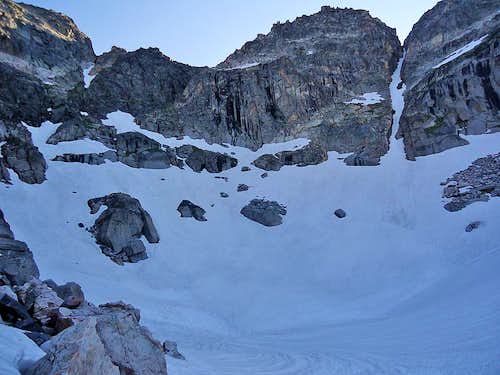 The small lake with Mount Cowen directly above.

From the lake, skirt its west shore and aim for the gully or couloir just left of Cowen's southwest face. The gully itself isn't visible from the lake but you can tell it is there. Once you get a ways up the slope above the lake it will come into view. We climbed up steep snow to a ledge that allowed us to traverse (to climber's right) up and over another, larger snowfield into the gully. The traverse was 3rd class with some loose rock along the way. 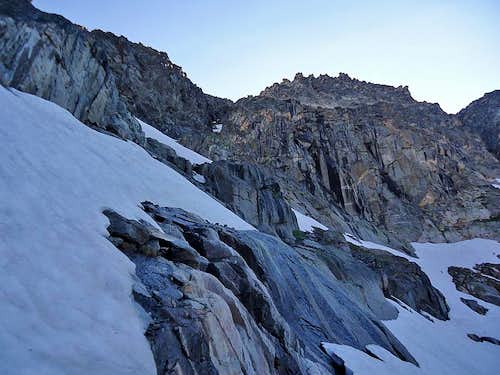 Looking over at Cowen from partway up the snow.

There will still be snow in the gully into July. There was about a 40-foot section of snow when we were there. The rest is mostly loose rock, although the couple bigger moves had solid rock. Just before you reach the top of the gully you will be able to easily exit it to climber's right. 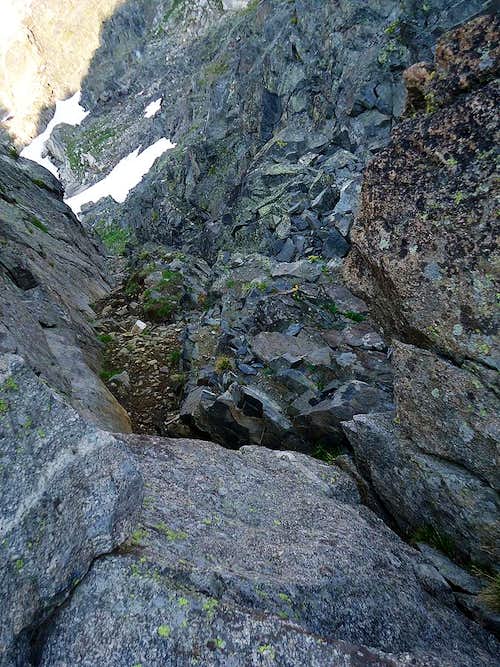 Looking down the gully you ascend just left of Cowen.

This takes you out onto the SW face of Cowen. You have two obvious options where to go from exiting the gully. You can descend to the grassy slope below you or you can climb up 4th class terrain on your left. Your ultimate goal is to be in the right-center portion of the face. This is more easily attained via the grassy slope but more fun to stay higher on the face as you cross. We took the grassy slope across on the way up and stayed higher up on the way down. Once you traverse about 2/3 of the way across the face you may notice cairns occasionally. They may help you, they may not. Depending on your route-finding skills your climb can be anything from mostly 3rd class with occasional 4th class to mostly 4th class with some 5th class moves. The rock is solid on the face. 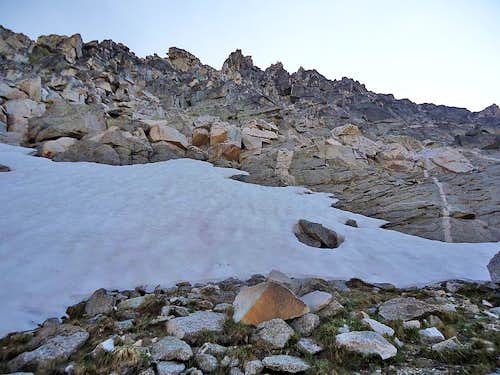 Looking up the SW face from the bottom. 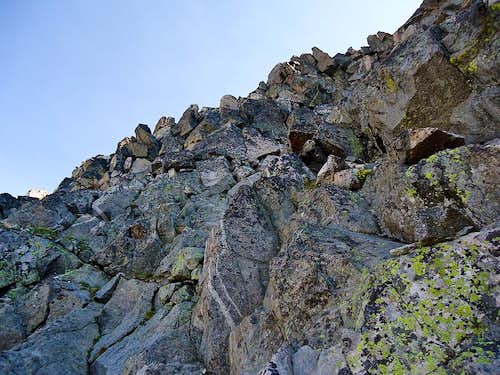 Much of the SW face looks similar to this. 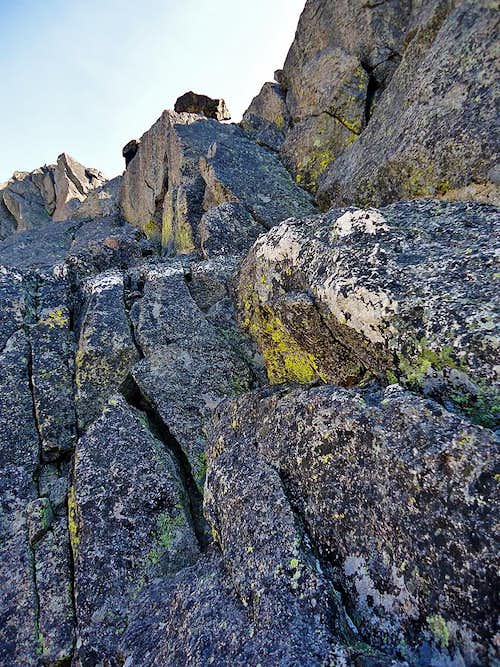 Lots of fun scrambling to be had.

Eventually you will find your way to the top of the SE ridge. Traverse around to the north side of the summit, where an exposed ledge awaits. There are multiple 5th-class chimneys that lead to the summit blocks here. The one that you can step up in to looked like the easiest. Pull yourself up in to the chimney then traverse out onto the face on climber's left then up to the summit. There are two climbers logs on the flat summit blocks. You can downclimb the chimney or rappel off the summit area. 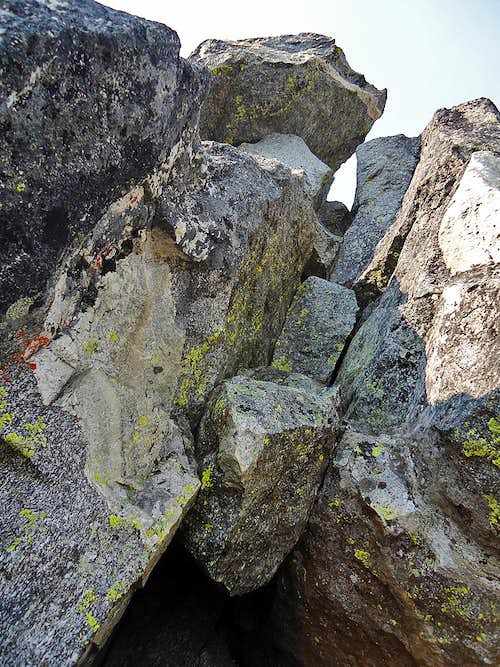 The chimney leading to the summit. 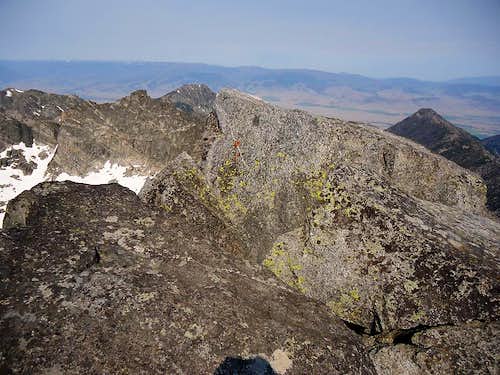 Looking west at the summit blocks and down into Paradise Valley. 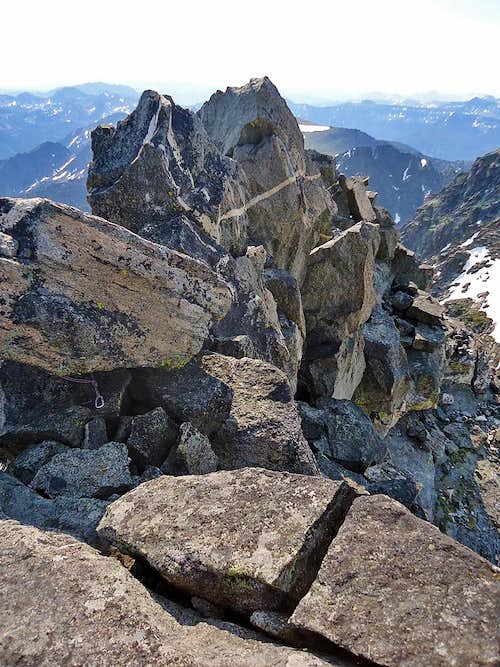 Recommended gear:
Ice axe - We climbed July 10 and the bowl below Cowen was still completely snowbound. I don't know when things would melt out but I would guess no earlier than late July/early August.
Crampons - You will want them early-mid season for certain. Late season you probably wouldn't need them as long as there wasn't an unusual freeze the night before.
Helmet - Lots of steep rock and steep snow. Rockfall is always a possibility plus it never hurts to have a helmet on anyway. It has saved me a few bumps that were my own fault, not nature's.
Rope - If you don't think you would be comfortable climbing/downclimbing the 5th class section at the top I would recommend bringing a short rope. You wouldn't need much more than a 30-foot rope to rappel off or belay with.

Mount Cowen is located in the Absaroka Beartooth Wilderness and Gallatin National Forest. There are no fees for camping, hiking or climbing. There are lots of really nice camp sites on the south side of Elbow Lake. There is plenty of water along the trail to Elbow Lake, at the lake and most of the way up to Cowen.

Most people climb July through early September. Winter/early season climbs are possibly but the Elbow Lake approach travels through a lot of avalanche terrain so avalanche knowledge is a must if attempting in winter.

Thomas Turiano's book "Select Peaks of Greater Yellowstone" has a wealth of information about Cowen's mountaineering and geologic history. http://www.selectpeaks.com/ThomasTuriano/Author.html

Ron Brunckhorst's Alpine Rock and Ice Guide to Montana is the best (and only) reference for those planning to climb one of the numerous rock climbing routes in the Cowen Cirque. Tom Turiano has a great section on the peak in Select Peaks of the Greater Yellowstone.

There is a sign at the junction for the East Fork of Mill Creek, just after you cross the bridge over that fork.

A trip report for Mount Cowen in January of 06 is on my web site at...
http://trex2.oscs.montana.edu/~kylec/
and on
splitboard.com

The coordinates currently place the peak in Mongolia. There are a few other peaks incorrectly hanging out there too...

Should be fixed now! Thanks!