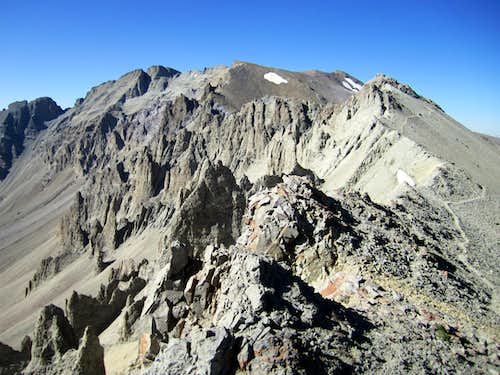 Francs Peak from the northeast

Francs Peak is the highest peak and sole 13er of Wyoming's Absaroka Range. Its several-square-mile massif includes 8 measured sub-summits over 12,000 feet occupying several ridges and sub-ridges with the west face dropping steeply for 4000 feet to the Greybull River. In addition to reigning over the Absaroka Range and the Big Horn Basin, the expansive view from its summit includes the highpoints of Wyoming's other 13er ranges - Big Horn, Wind River, Teton, as well as Montana's highpoint. It was likely climbed by prospectors in the late 19th century from the nearby mining encampment of Kirwin and is named for Otto Franc, a Big Horn Basin homesteader. It is the only major Wyoming peak that has seen mining activity.

Francs Peak sees many ascents every year due to its prominence and stature as a range highpoint. Because it is the highest point in Park County, it has seen even more activity in recent years due to the increasingly popular hobby of county highpointing. Even without all of the accolades, the summit is well worth a visit, as it towers 500 feet over any other peak in the Absarokas! 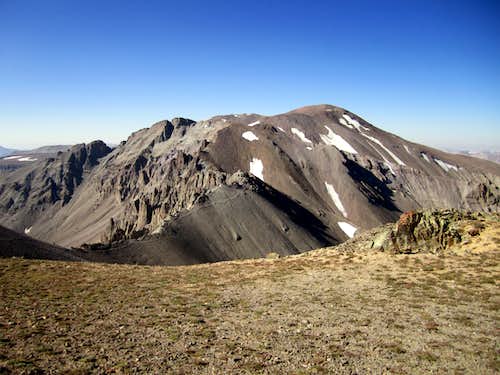 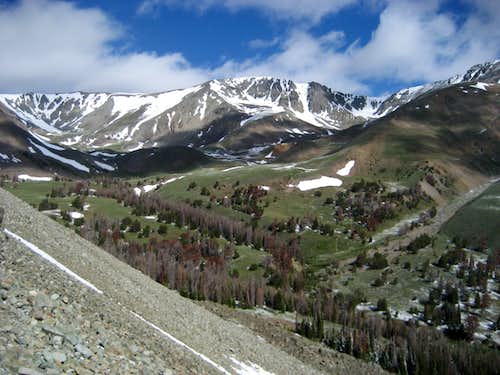 Both approaches begin in Meeteetse (home of the world's rarest mammal). Turn on highway 290 by the gas station, and drive for about 7-8 miles, where you will see the left turn onto the Wood River Road.

For the southern approach, turn here and continue along the good county road (paved for a while) and eventually enter the Shoshone National Forest. After 21 miles and the Brown Mountain campground the road becomes rather rough for cars. 4WD is not necessary, but high clearance is needed in some areas to cross the streams as well as the big crossing of the Wood River just before the Meadow Creek trail head. 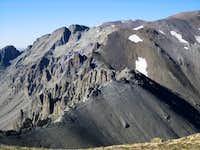 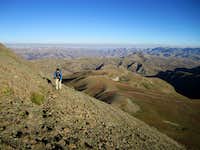 For the northern approach continue on the highway past the Wood River Road turn, branching off on the Phelps Mountain jeep road by some tanks a couple miles past the Four Bear hills & oil field. To avoid the 4WD section, continue on the main road for several more miles to the campground and trailheads at road end. The Jack Creek trail heads due south for 7 miles to the north slopes of the mountain. 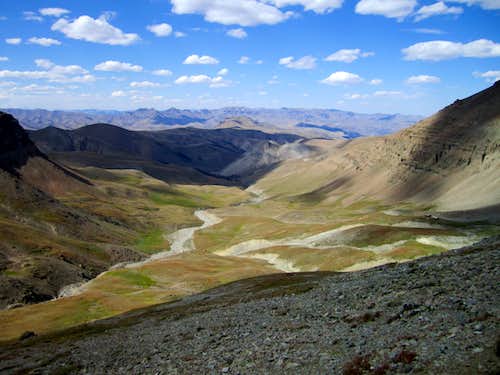 There are no permit requirements to climb Francs from either side. Wilderness rules and etiquette apply for group size, fires, and water filtration. Francs Peak is on the Washakie Wilderness boundary and administered by Shoshone National Forest. Francs is a known grizzly habitat; take precautions.

There are two basic Forest Service campgrounds on the southern approach (Wood River) road. High camp can be made in Meadow Creek Basin to shorten the summit day. The northern approach is on alpine tundra with sparse water availability. 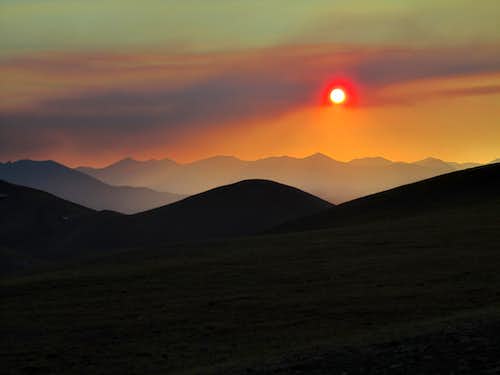