The Absaroka Range is a member of the Central Rocky Mountain Chain. Stretching from Livingston (Montana) to a point east of Dubois (Wyoming), it forms the core of the Yellowstone region of the Central Rockies. Some 165 miles in length and 75 miles wide at its widest, it is, depending on how one measures, the largest individual range in the 1200-mile-long Rocky Mountain Chain. The Continental Divide passes through the southwestern corner of the range but not near the crest.

There are two distinct portions to the range with geological differences. The larger section (mostly in Wyoming) is largely composed of volcanic breccia. North of the state line, there is a transition (along the same fault lines and crest) to peaks composed of granitic and gneissic bedrock. This gives most of the Montana section a different character though rock of either type is found in many areas. 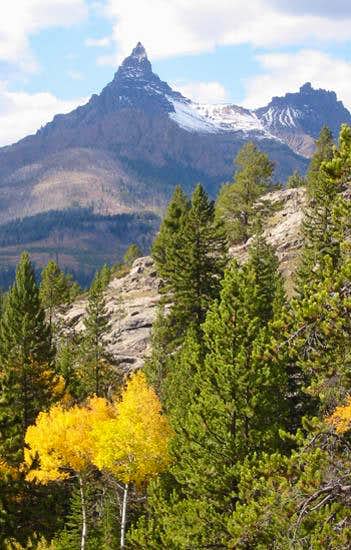 Eons of lava flows from a succession of volcanos were sculpted by glaciers into some of the most phenomenal spires and turrets in the Rockies. The sharper breccia peaks are, however, notoriously loose. They sometimes appear constructed of conglomerate similar to other areas in the Rockies (such as one finds in the pink conglomerate of Colorado's Crestone Peaks) but the ash matrix is largely softer and, while climbing, holds can become portable. This doesn't deter "cobblehead" aficionados who become accustomed to the safety requirements of the area. (Frutrated climbers often describe the routes as "kitty litter"). Long cliff bands are the norm; often turning 90-degree angles, many are topped by alpine plateaus. Tucked into seldom visited valleys, spur ridges have been glacially sculpted into tall needles and fins. Of a different character, the Montana section of the range has firmer rock and several summits have solid trad routes.

Sections of the range have the lowest permanent snow lines in Wyoming; due in part to the snow-generating Yellowstone Plateau.

A complex range, it takes significant effort to learn all of the various groups, sections and drainages.

The northern boundary of the range is along I-90 near Livingston, Montana. From there the range trends south where it is bound on the west by the Yellowstone River (Paradise Valley) and on the east by the Boulder River.

Near the border of Yellowstone Park the composition of the range changes. It then trends southeast (an area contained in the northeast corner of the park). In this region the Beartooth Range abuts to the northeast. South of this, the Absaroka widen considerably. Continuing to trend south and east, they are then bound on the west by the Yellowstone Plateau, the east by the Bighorn Basin and the southwest by Jackson Hole.

The west side of the southern face (sometimes referred to locally as the Washakie Range) meets a high plateau (the Union Pass area) where three additional ranges meet: Mount Leidy Highlands, Gros Ventre and Wind River. The southeast section of the range is the crest and contains the 19 highest peaks. Just south of this, the east side of the southern tip of the range rolls into the desert regions of the upper Wind River Basin east of Dubois, Wyoming.

The most well known are those which happen to be inside the boundaries of Yellowstone National Park or are seen from highways. Notably:

Pilot Peak - One of the most fantastical features of the Rocky Mountains
Eagle Peak - Difficult to spot, near higher summits; the highpoint of the YNP boundary
Emigrant Peak - Dominant in Montana's Paradise Valley
Mount Cowen - The highpoint of the Montana subsection
Avalanche Peak - One of the most visited summits in Wyoming due to easy access, park traffic and ranger hikes

The highest peaks are grouped in the southeast section of the range:

The wilderness areas of the Absaroka are vast. In fact, the Thorofare region is often considered the most remote area in the contiguous states (in distance from roadhead).

The alpine areas are managed as the following wilderness areas from north to south:

These management boundaries roughly correspond with regional peak groupings. The southeastern tip of the range is privately held by the Wind River Reservation of Shoshone and Arapaho tribes and therefore closed to the public.

Trails in some areas of the Absaroka, particularly in or adjacent to Yellowstone, are highly maintained. In other areas, there are no official trails but the profusion of game animals has created them in nearly every drainage. Some of these are as easy to follow as built trails. In other areas, outfitters have created use trails. Because the range is heavily used by horsepackers, be prepared to encounter large camps and pack trains long distances from trailheads.

The South Fork Shoshone, near Cody, Wyoming, has, within the last decade, emerged as a "hot" spot for ice climbing. It is home to the annual Cody Ice Festival.

South Fork is reached via State Road #291 from the SW edge of Cody. It's about 35 miles to the end of the road and hundreds of frozen water features.

As well as the typical mix of flora and fauna found in the Central Rockies, the Absaroka are known for large stands of Limber Pine and unruly Grizzly Bears. Grizzly Bears are a serious concern in the range, particularly in Yellowstone Park, the Teton Wilderness and the Washakie Wilderness sections. Grizzlies that have become bothersome or have had human encounters in the park are drugged and airlifted for release in the Washakie Wilderness. Proper knowledge (beyond the scope of this page) concerning encounters with Ursus Arctos Horribilis should be obtained and implemented.

Seasons for the Absaroka correspond with those throughout the American sections of the Rocky Mountain chain. Roads are open by early June and high trails are snow free in early July. Snows begin returning in early September.

Main Roads
The highway from the Yellowstone north gate to Cooke City (US #212) is plowed year round.

Wyoming state highway #296 from Cody to Cooke City over Dead Indian Summit and past Sunlight Basin is open to the Montana border year round. The section from there to Cooke City is currently being widened and recontoured for eminent year-round access.

US #14/16/20 from Cody is always open to the east gate of the park. From there, over Sylvan Pass to Yellowstone Lake is plowed and open in early May.

Wyoming state highway #291 from Cody gives year-round access to the the South Fork Shoshone and the ice climbing areas.

Seasonal roads (all those in Yellowstone Park and #212 from Cooke City over Beartooth Pass to Red Lodge) are generally open late May to first heavy snowfall (sometime in October).

Conditions
The wettest part of the range is along the Yellowstone Park boundary and east. Because of the thermal activity and lake evaporation on the Yellowstone Plateau, peaks in the stormtrack to the east carry snowfields and glaciers unusually low for this part of the Rockies due to high precipitation (apx. 40 feet of snow per year at timberline). In this region snow lingers down to 3000m (9800') all but late summer. As you go east and south, the range becomes drier. The rest of the range is more typical of the Rockies. Winter temperatures are notoriously cold in valleys to the west of the range. West Yellowstone is typically the coldest spot in the U.S. and temps in Jackson Hole or Paradise Valley can dip to -30F/-34C in late autumn and winter.