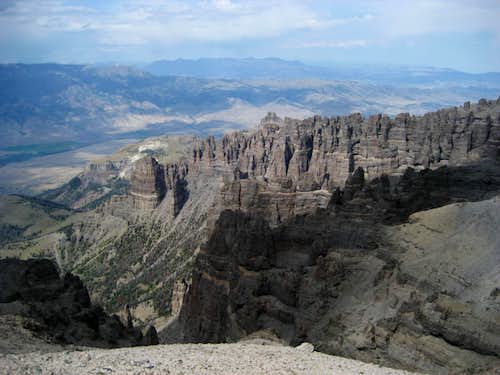 Of the major summits in the Absaroka Range, there are relatively few that can be reached during a day hike; the ruggedness of the landscape and the small number of established trails make travel slow, and the healthy grizzly bear population deters many people from exploring these beautiful and unique mountains. The Southeast Absaroka Range in northwestern Wyoming is bordered on the north by a huge mountain that stretches for over thirty miles along the South Fork of the Shoshone River.

While there at least thirteen unnamed summits with 300 feet of prominence along the long ridge, the entire peak (as well as the highest point) is known as Carter Mountain. Not only is Carter the largest mountain mass in the entire Greater Yellowstone Ecosystem, but its steep and pinnacled north face is one of the highest in any of the ranges of Wyoming or Montana, dropping 4,000 feet in one mile and 6,000 feet total to the river. 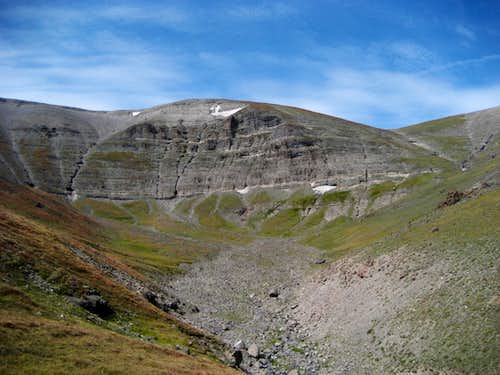 Fortunately for anyone interested in standing on top of this mountain, the southern side slopes gently down to the Greybull River, which separates Carter from some of the other major peaks in the range, including Francs Peak and Jojo Mountain. The route to the top is strenuous, but it can be easily done in a long day, provided you start early enough to avoid the bad weather that builds in the heart of the range to the southwest and heads in the direction of Carter. 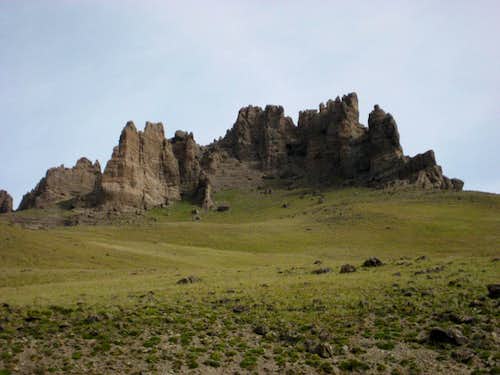 While hiking on this peak, it is impossible not to notice the amazing rock spires that are found all over the ridges; the largest of these is the impressive Turret Pinnacle, which rises over 500 feet from a spur on the north side of the mountain to an elevation of 11,565 feet.

According to Tom Turiano's book Select Peaks of the Greater Yellowstone, it is unknown if this feature has been climbed, as all sides of it are nearly vertical, the approach is very difficult, and the rock is made up of the typical loose conglomerate (breccia) that is found throughout the range.

The ridge near the summit of Carter Mountain is prime army cutworm moth habitat, which means that, during certain times of the year, grizzlies can be found here in abundance. A local volunteer spotter for the Wyoming Game and Fish Department counted thirty-four bears in one day along the ridge in the middle of August in 2009!

The views north from the summit of Carter Mountain are quite spectacular, as the South Fork highway and river are a dizzying 6,000 below with the Southwest Absaroka Range rising up to 12,000 just beyond. The skylines of the Northern Absarokas and Beartooths are also visible in the distance. Away to the south, Francs Peak is without question the dominant peak of the entire range, and many of the peaks surrounding Kirwin are visible as well. 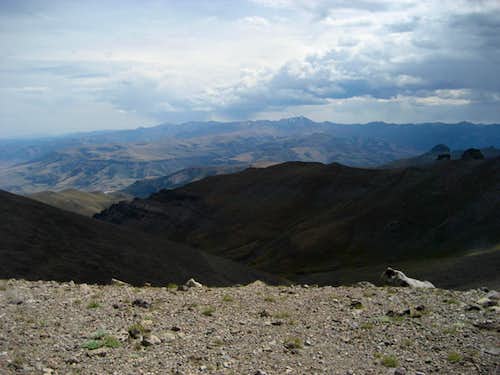 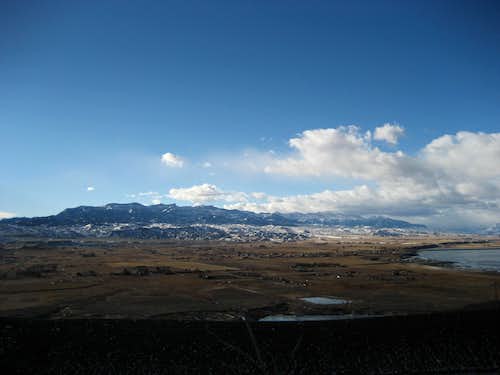 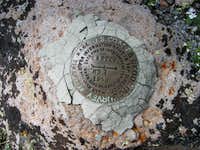 The name "Carter Mountain" first appeared on the Shoshone National Forest map in 1921. There are two prominent men named Carter in the early history of the area, and it is unclear for which one the peak is named. Judge William A. Carter was a guide for the 1870 Hayden Survey in the Uinta Mountains and became one of the wealthiest men in Wyoming, bringing the first herds of cattle to the Cody area and his ranch on the South Fork in 1879. Doctor Charles Carter started the Bug Ranch in the Big Horn Basin in the same year, and is also credited with bringing the first herds of cattle to the area.

The summit benchmark was placed in 1950 by Ector B. Latham and the U.S. Coast and Geodetic Survey crew. The marker is not at the highest point of the mountain, but can be found about 30 yards from the summit in the middle of the flat area just below the top. As with the majority of summits in the Absarokas, there is no summit register.

Source: Select Peaks of the Greater Yellowstone: A Mountaineering History and Guide by Thomas Turiano

Carter Mountain is ranked #126 among peaks in Wyoming, and has a prominence of 1,699 feet. 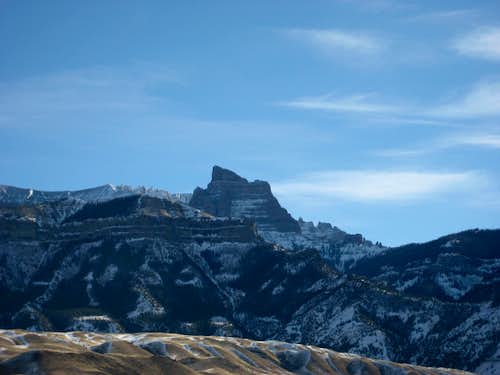 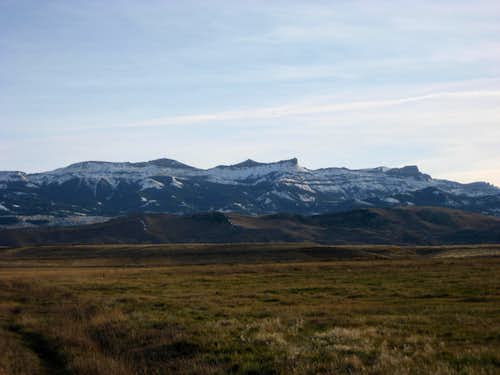 If you ask just about any outdoorsy person around Cody, Wyoming about Carter Mountain, they will tell you that there is a road to the top. This is not true, but it is not totally false either; the reason for this common misconception is a simple one. From Cody and most of the Big Horn Basin, the large rock prominences on the east end of Carter Mountain appear to be higher than the rest of the peak, which is seen from a much greater distance.

However, the highest point on this side of the mountain is the Marquette Benchmark #2, which is only 11,301 feet high and is over 1,000 feet lower than the true summit. Forest Road 210, an unmaintained and rugged drive that is also known as the Carter Mountain Road, runs up the southern slopes of the mountain to the plateaus near this point, but never comes anywhere close to the true summit of Carter Mountain.

I have explained this to many people, and I have received many responses, ranging from "Wow, I didn't know that" to people who look at me like I'm nuts and stubbornly reply, "Well, all I know is that there is a road that leads to the top." Whatever...

The only realistic option for hiking to the summit of Carter Mountain is from the south side, as only the very adventurous scrambler will brave the immense scree slopes and bad rock of the north face by heading up the Aldrich Creek drainage. This climb is possible, but the only person I know who has done it said it was very difficult and took seven hours to cover about 3.5 miles. However, this side of the mountain is one of the very best ice climbing areas in the United States; for more information, visit the South Fork Shoshone page.

To reach the road that will take you to Pickett Creek, start in Meeteetse, Wyoming and take Highway 290 southwest out of town. After about 10 miles, take the right fork onto County Road 41X. Shortly after this point, keep left when another county road takes off to the right, and continue past the end of the pavement to the Pitchfork Ranch, which is located just after the bridge that crosses the Greybull River. Here, there is a sign directing you onto the Pickett Creek Road; follow this road for a little over 9 miles through two gates and the obvious junction with Carter Mountain Road, which heads off to the right.

Soon after this, 4WD is needed as the road descends and crosses Pickett Creek and a small tributary stream. I parked at the next gate after this, as the road beyond it gets very bad, but it is possible to drive almost another half mile to the final gate that closes the road to vehicle traffic. 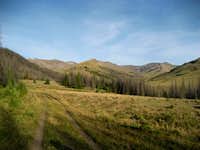 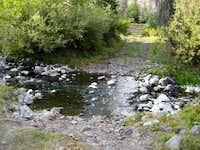 Hike the road from here through a forested section to a crossing of the left fork of Pickett Creek and leave the road once you reach the clearing just beyond the crossing. From here, the goal is to follow the creek that you just crossed all of the way to its headwaters just below the summit of Carter Mountain.

Scramble up the ridge to the right of the creek to avoid the narrow canyon at the bottom and follow game trails or Forest Road 209 to the left around the ridge. The rest of the trip can be accomplished either by staying in very wide bottom of the drainage near the creek or by following game trails along either side.

Near the end, there is a place where a ridge on the left drops down to the bottom and it is necessary to leave the creek and ascend to find the trails on the left side of the stream. 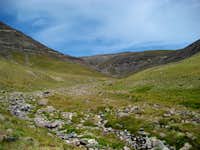 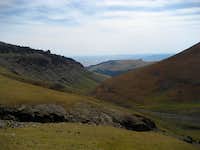 Looking back down the drainage

Once you come around this bend, you will enter the large bowl just under the peak, which still towers 1500 feet above on the top of a steep wall. From here there are two routes to the top, both of which are of similar difficulty. The first option heads up the grassy slopes to your immediate left and follows the skyline from left to right over to the summit.

I did not take this route up, as I was unsure about negotiating the rocky section on the ridge, but after checking it out on the descent, it is very easy and I will probably choose this route when I do the peak again. The other option is to head straight across the large rock field below the mountain and head up the steep slopes to the right, occasionally negotiating some easy scree sections in the stream gullies.

Once on the ridge, head left up to the summit. Either way you choose, gaining those last 1500 feet over the final mile of this hike is a brutal and tiring undertaking that takes much longer than you think it will!

Climbing Carter Mountain is a one way Class 1 hike of about 6.5 miles with almost 4000 feet of elevation gain; allow 60-75 minutes for the drive from Meeteetse and 4-6 hours for the climb. 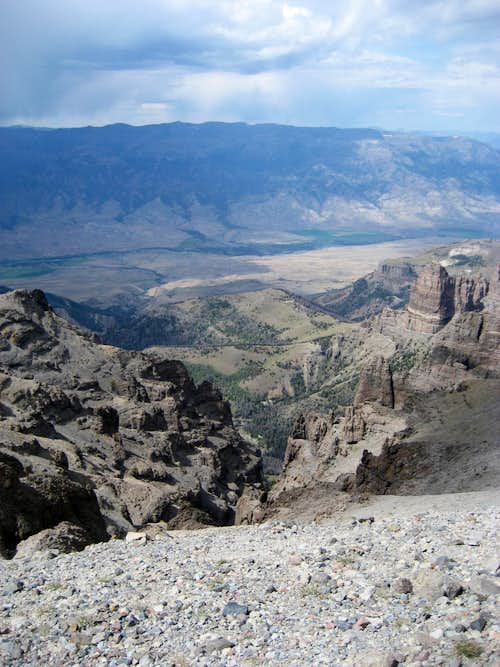 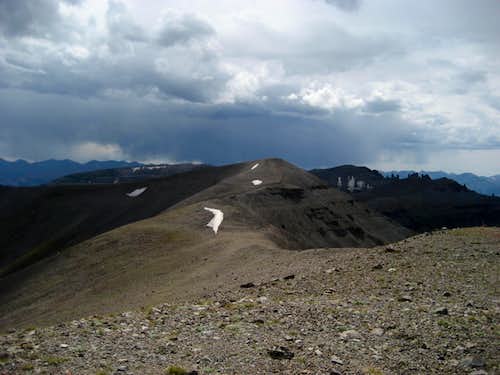 There are no fees to access the Shoshone National Forest. Be sure to stay on the road through the private property of the Pitchfork Ranch during the drive to the trailhead. There are grizzly and black bears here, as well as mountain lions, wolves, and many other types of wildlife, so carry bear spray and know your rules for traveling in bear country. A mentioned above, grizzly bears go everywhere, including very high up; they hunt for the moths well above 12,000 feet and are expert scramblers on scree and loose terrain. Proper food storage rules apply to overnight stays in the Wilderness. 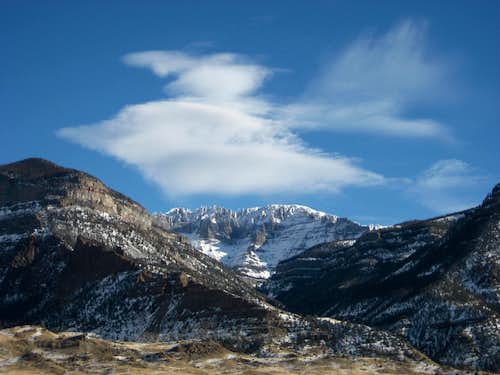 Backcountry camping is allowed in the Shoshone National Forest, provided that you follow the rules about camping away from streams and store your food properly. Water is plentiful in the numerous drainages on Carter Mountain, and there are generally a few snowbanks that linger throughout the summer on the high ridges of the peak. Always practice Leave No Trace ethics when hiking and camping in this area. 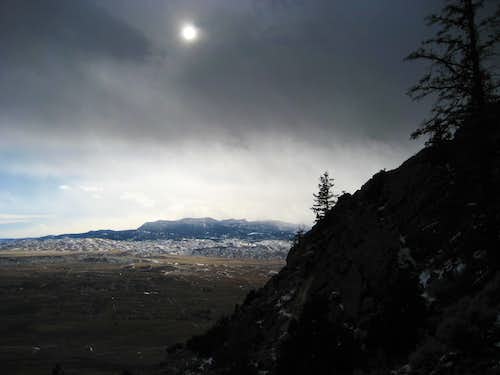