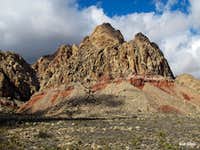 Consisting of three summits, the Monument, or Monument Peak, is a rugged, spectacular destination near the southern end of Red Rock Canyon National Conservation Area.

East Peak is a distinctive subpeak of the massif, and although it lacks the prominence to be a ranked peak, it is considered by some to be a separate peak due to its detachment from the main mountain mass and the fact that there appears to be no way directly between it and the other summits of the Monument that does not involve difficult Class 5 climbing. Thus, most who wish to climb both the Monument and East Peak will do so on separate days (though I did both in one day, making for a long day of about 14 rugged miles and 4000' of total elevation gain-- that does not sound too epic, but the terrain will wear you down).

There seems to be some confusion and disagreement over the name of this peak. Two well-versed locals known for their many explorations of the area, including the establishment of many a scrambling route, call it East Peak (they call the slightly lower eastern summit of the Monument East Monument). Another well-versed local who also is a respected guidebook author calls it East Monument Peak. And rock climbers apparently refer to the walls on East Monument Peak and East Peak as just Monument. In any event, this peak is the very distinct, notably lower subpeak east of the main mass of the Monument.
It is a fun scramble and a rewarding summit, with views of The Monument, Black Velvet Peak (including Black Velvet Wall, the highest wall in RRCNCA and home to world-famous Epinephrine), and much more. 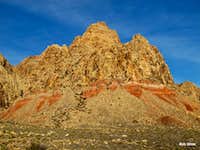 Turn into this parking area and follow the pavement east for 0.2 mi until the pavement ends. From here on out, high clearance is recommended, but I have seen passenger cars make the drive.

2.5 mi of rough driving northward gets you to Black Velvet Canyon Trailhead. There is no sign proclaiming this, but the road ends there, so there's no mistaking it. About 1.5 mi from the end of the pavement, there is an intersection. Stay straight. In 0.2 more mi, the road bends sharply left (straight ahead is a gate closing the road to further northward travel by motor vehicles). Now it is 0.8 mi to the trailhead, and it is here that you encounter the roughest patches of road.

The route to the summit is only about 2 miles and gains 1000'. Although that sounds moderate, the first third of the route is relatively flat, making the rest quite steep, and there is plenty of scrambling, including some exposed Class 4 that has a fair amount of "pucker factor" in one section.

Head out from the TH on the closed road, which soon narrows into a true trail. Soon, you notice an obvious chute dividing East Monument from the rest of the massif. You want to head to that chute. 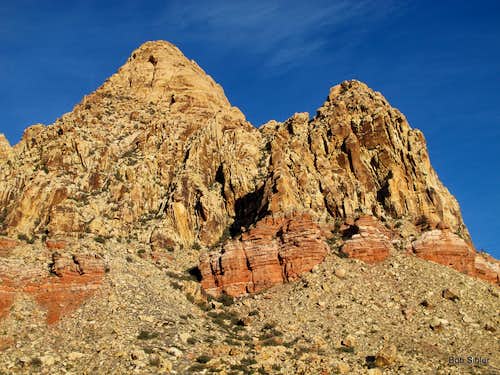 Don't get into the drainage too early. Instead, stay high and to the left. Cairns help keep you on course, but even without them, you'll be fine if you remember to stay high and left.

Eventually, you are forced into the drainage itself. When the chute goes to impassable cliffs ahead of you, look to the right for a ledge system. Again, cairns may help you, but again, it won't take long to figure out the right way since all other ways turn into foreboding Class 5 terrain. Follow this ledge system, which sometimes is very narrow and exposed, until you pass by and above those impassable cliffs. 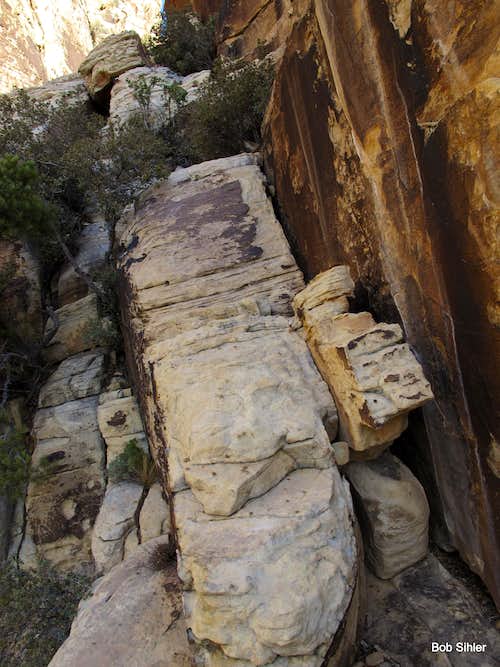 The rest of the way is pretty simple. Once again, cairns steer you along if you need them, but patience and persistence will get you up regardless, and when the summit block becomes apparent, it gets even easier. There's plenty of Class 3 here and potentially some Class 4, but the exposure tends to be minimal. 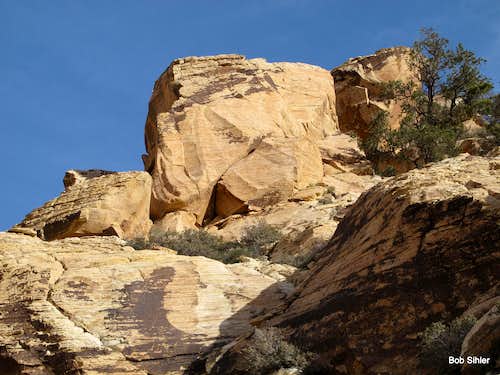 One final short scramble to the summit awaits. Enjoy! 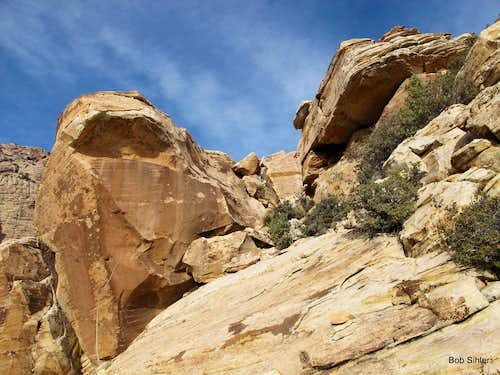 Red Tape, When to Climb, Where to Camp

Icy spots are possible in winter, but in general, winter, spring, and fall are the times to climb this peak. Because you spend just about the entire time in the sun, this really is not a good peak to climb in the summer.

Camping in RRCNCA is illegal at the elevations here, though I highly doubt the authorities are going to mess with you (or even come checking) if you just sleep in the car. The nearest developed campground is about 15 miles away, approximately a mile east of the entrance to the Scenic Drive off SR 159.