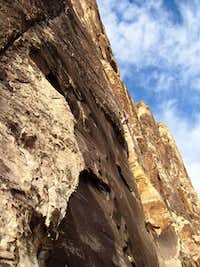 Black Velvet Wall is the crown jewel climbing destination at Red Rocks. Located on the north face of Black Velvet Peak. Black Velvet Wall is home to some of the most infamous routes in the entire park including but not limited to Dream of Wild Turkeys, Prince of Darkness and Epinephrine. At the 5.10 grades, one would be hard pressed to find this quality of sustained wall free climbing bunched so close together in one location. Zion National Park for example does not offer a wall with this many established routes, not to mention few of the long routes in Zion go free. 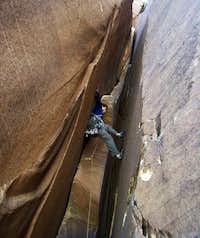 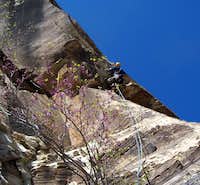 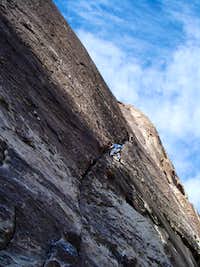 Black Velvet Wall is about free climbing. Not one of the many outstanding routes on Black Velvet Wall were intended for aid nor rated that way by the first accentors. That is the tradition that the Uriostes and others had in mind as they developed the area. The ethics were such, that bolts were only used where necessary to avoid long run outs. Adding bolts on the wall is frowned upon in a big way and to date, ethics have won out. Not every line is a majority traditional one however. Prince of Darkness was nothing more than an attempt to run the straightest line they could up the wall. In doing so, it is almost a sport route, but where cracks intersect the path, fixed gear is absent.

I have climbed most of the classic routes on this wall and it is next to impossible to pick a favorite. Overhanging Hangover and Sour Mash offer unique roof situations. The Gobbler and Dream of Wild Turkeys offer some incredible mixed terrain. Prince of Darkness gives you a full day of crimpy face climbing. Epinephrine offers some of the best chimney climbing anywhere in the lower 48.

You park at the Black Velvet trail head which can be reached off of NV 160. During 2008, the regular Black Velvet dirt road was under construction and thus closed. As of 2009 it is re-opened with a paved trailhead off of the highway. Drive through the paved parking area and access a dirt road at the east end. Follow this road as it crosses a dip that will be difficult to navigate with a low clearance vehicle depending on conditions. Continue to a fence and follow the road as it turns left. This bumpy road ends at a trailhead area. From the parking area, follow the old road until a trail leaves it heading for the canyon. Continue on this trail until you come to a fork whose right option descends into the wash. Stay with the wash all the way to the dry waterfall. This dry waterfall is an obstacle that clearly involves a 5th class move or two to overcome. Back up a few steps and look for a trail that ascends the south bank to the base of a short white sandstone cliff. Scramble up the cliff (3rd-4th class), moving left to right until you hook into another trail that leads further up to the base of the wall. The start of Prince of Darkness and Dream of Wild Turkeys is an obvious large light colored flake feature that ends at the start of the intense climbing on the solid dark wall above. Dream of Wild Turkeys takes off on a right angled long crack and Prince of Darkness goes straight up the center of the wall. Drop back down into the wash after you circumvent the dry waterfall if you are headed for Epinephrine and the routes on the “right” side of the wall.