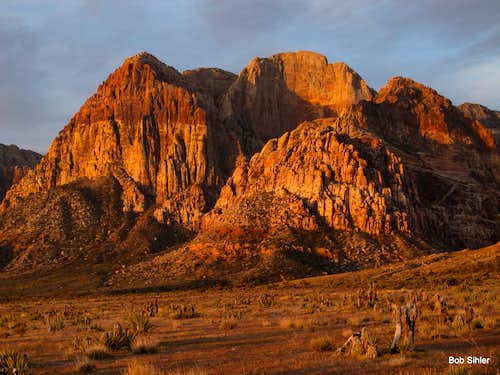 Red Dawn in Red Rock Canyon
Despite its striking coloring and aesthetically appealing form, Juniper Peak, were it not situated in a prominent location separating the mouths of Juniper Canyon and Pine Creek Canyon, might be considered only a minor peak in Red Rock Canyon Conservation Area. Even as it is, Juniper Peak is almost overshadowed by the much-higher neighbors on its north and south sides: Bridge Mountain and Bridge Point (north), and Rainbow Mountain and Rainbow Wall (south).  Were it tucked back in a canyon, it would be one of the many obscure peaks in the area, but because it's so highly visible from the Scenic Drive, it's one of the most recognizable peaks in the conservation area.

There are numerous technical routes in and near Juniper Canyon, including on Brownstone Wall, a famous and spectacular feature of Juniper Peak.  A Class 2-3 scrambling route goes to the summit via Juniper Canyon (see attached route page).  It is a cairned route that sometimes is described as still difficult to follow without a good description, but I feel it's quite intuitive after you figure out where to leave Juniper Canyon to attain the sandstone slopes above; I don't think I would have had any trouble at all finding my way to the summit without all the cairns (unsightly and unnecessary, in my opinion) on the upper portion of the route.
A less-used scrambling route goes up from the south fork of Pine Creek Canyon, and Juniper Peak pairs well with nearby Gunsight Notch Peak via a nice traverse (see attached route page).
The summit of Juniper Peak is a pretty awesome place.  In addition to the fine views to the east and down into Pine Creek Canyon, there are the spectacles of Bridge Mountain and Rainbow Wall; the former is one of the greatest masses of exposed sandstone around, and the latter is, I think, the largest sheer wall in RRCNCA after Black Velvet Wall several miles to the south. 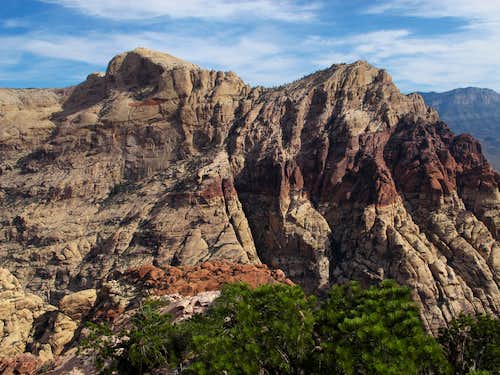 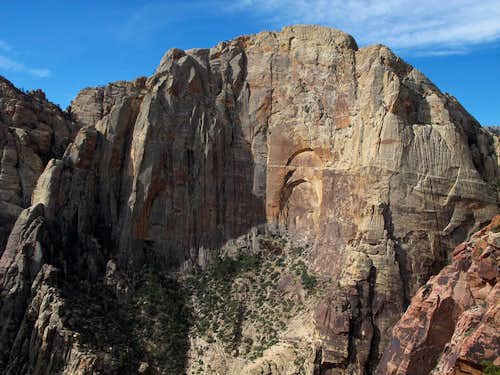 Rainbow Wall
Juniper Peak is an unofficial name; on maps it is Point 6109.  And yes, there are junipers at the summit.

Many major Red Rock peaks have subpeaks.  Although they lack the prominence to be considered truly separate peaks, they nevertheless have enough distinction to have unofficial names and are seen as climbing objectives on their own.  Juniper Peak is no exception; the formation has four subpeaks, and one of them (Rose Tower) is home to one of the area's most popular technical climbs-- Olive Oil (5.7).  Following is a list of those peaks, along with a note about a scrambling route for each.
There are also some walls that have numerous technical routes:
The following routes are on Juniper Peak but are not attached to any of the above pages: 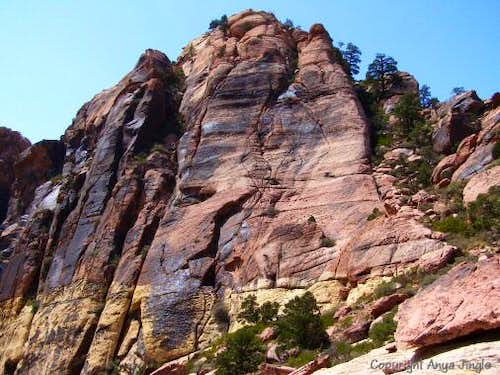 From Summerlin, follow Charleston Boulevard (SR 159) west to the entrance to the Scenic Loop through Red Rock Canyon National Conservation Area (entry fee).  Drive 10-11 miles to the large, signed parking area for Pine Creek Canyon.
159 is also accessible from the west via SR 160.
Some hike in from the Oak Creek Canyon trailhead, which is not far past the Pine Creek Canyon one.  The difference in distance is reportedly not that much.
You can avoid the fee and the one-way loop drive by parking at the unmarked but easily seen trailhead for North Oak Creek Trail located along SR 159 a short distance west of the loop drive's exit.  This, of course, adds some hiking distance each way-- 0.9 mi.
Hiking in from the signed Oak Creek Canyon TH off 159, which reaches the canyon via South Oak Creek Trail and the Chinle Trail, adds 1.5 mi each way-- definitely not recommended unless the other TH off 159 is closed for some reason.

Hours the Scenic Drive is open:

13-Mile Scenic Drive
Note: these hours are subject to change.  To be safe and sure, contact the park before visiting.
The BLM (the agency that manages this area) allows dogs in the backcountry. Please keep them leashed and pick up their feces.

Spring and fall are the best.  Winter is not bad, but temperatures can be cold and the canyons can be icy.  Summer ascents are not advisable because even with a predawn start, you are likely to be caught in the scorching heat during the return.  The canyons can offer shade and running water, but the exposed sandstone is like an oven.  However, because Juniper Peak is fairly close to the trailhead, because it is several hundred feet lower than the "big" Red Rock peaks, and because the standard scrambling route is pretty short, it's possible for people in good shape to make a summer ascent by starting early and getting back before the dangerous heat sets in.

Complete video of the climb. https://youtu.be/QcGva0NZEVk