El Misti is an active and very symmetrical volcano towering over the white city of Arequipa (2380 meters), the second largest city in Peru. This area was an important settlement area since before the Inca. The Spanish founded the city in 1545. Since the region has a history of earthquakes and eruptions it was only a matter of time before Arequipa was impacted. It was severely damaged in 1600 and then rebuilt. El Misti, thankfully, hasn’t had a major eruption since the 1400’s. In 1998 several mummies were discovered inside the crater rim of the volcano, confirming its sanctification under the Incas. 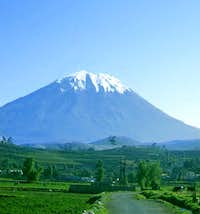 El Misti as seen in 1985: The permanent snowcap has since disappeared.

El Misti is known as somewhat of a tourist mountain because many travelers to Arequipa see this spectacular mountain and decide to give it a try. Five to ten people a week climb up its dusty slopes, though the percentage of people who actually make the summit is pretty low because of acclimatization issues.

In general one needs two days to make it to the top, for that reason a tent, etc. are necessary. To make it in one day one should be perfectly acclimated and in high physical condition. Few can do the climb in one day.

On June 23, 2001 a major earthquake whose epicenter was about 110 miles from Arequipa hit Peru. The magnatude 8.4 earthquake killed at least 102 people and caused major damage in Arequipa.

El Misti has no glaciers and now days, usually has little snow. The similar elevation mountains nearer to the equator have more snow, ice, and glaciers, but the area surrounding El Misti is dry and there isn't enough snowfall to sustain glaciers. 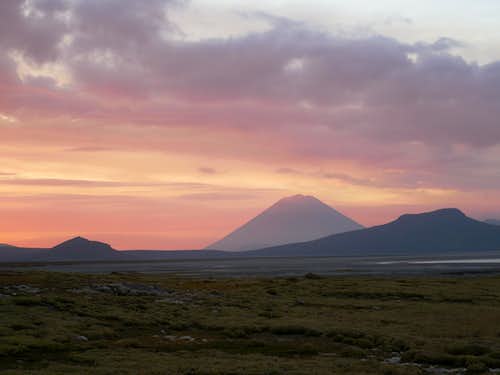 An unusual view of El Misti at sunset, this time from Laguna Salinas.

To get to Arequipa you have two main choices: road or air. Arrival by train from Cusco or Puno is no longer possible.

If arriving by bus be prepared for a long ride (20 hours from Lima). For more information on how to get to Arequipa, check the Volcanoes of Arequipa page.

Transportation to the Mountain

Because there are just dirt roads to the foot of El Misti you may need a 4x4 to reach the trailheads comfortably (to hire a driver with a 4x4 check this ascent arrangers page).

Credit: These directions were written by Mike N

Leave Arequipa towards Aguada Blanca. You will need permits to go through the gates. The road is terrible and it takes you between Chachani and Misti. At a fork in the road where a large sign says National Reservoir Aguada Blanca, take the right fork. You will eventually see the lake and dam. Go to the gate and have someone open it. They will appreciate it if you bring some bread or something for them. Cross the dam and follow the main path. A 4WD vehicle is mandatory. 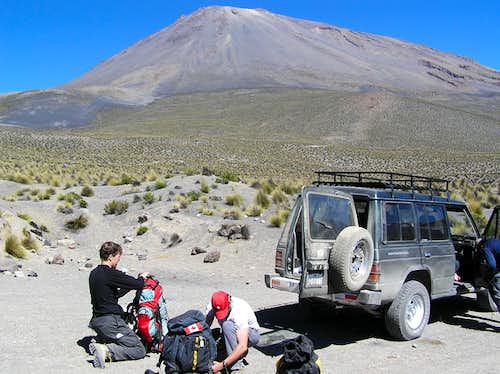 From Arequipa, take the old road to Puno that is used for going to Chiguata village (2987 meters), northeast of Arequipa. At about 3/4 of the distance between downtown and Chiguata (also called Chihuata), on the left side of the road, you should see the El Misti irrigation/hydraulic company complex.

At this point the Misti summit should be between north and 10 degrees from north clockwise. Turn left here and pass through a gate (the irrigation company should let you in) toward the volcano and take the dust track that enters into a field limited by white walls. From here follow the rough road (there are junctions) that leads to the base of the volcano. The dirt road ends at about 3400 meters where there is a board indicating the Aguada Blanca ecologic reservation. This is the trailhead. 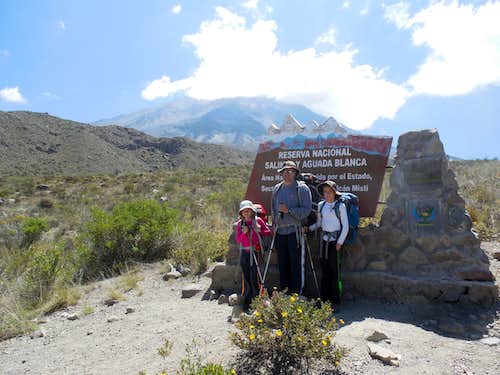 Grau trailhead on the south side of El Misti. The trailhead is at 3400 meters.

Hiking to the trailhead from the city (south west approach) is no longer recommended due to the risk of traveling through some rough neighborhoods.

The trailhead is at the very north of the Independencia neighborhood (Alto Selva Alegre District). Actually Independencia is an "urbanización" a kind of chaos of new settlement in the suburbs of Arequipa. Today it's possible to go as high as 3400 meters by 4WD on a rough road, driving north and then east in direction of the volcano until reaching the northern edge of a huge canyon coming down the southeast slopes of El Misti (visible from the city). The place is called Los Pastores.

Alternatively, Los Pastores could be reached from another "urbanizacion" called San Luis (Alto Apurímac), at the end of the same canyon. In this case go north until joining the rough road coming from Independencia.

Most climbers take two days to complete the climb. If you are acclimated very strong climbers can make it from trailhead to summit and back in a long day. Since water isn't found on the mountain the longer you take to climb the more weight you will carry.

All routes are non-technical, but strenuous due to high altitude and elevation gain.

This is a route reachable in 3 hours by 4x4 from Arequipa. This is said to be the easiest and most pleasant route to the summit, but the trailhead is a little harder to reach and requires a permit.

The trailhead is approximately at 3700 meters. The normal campsite is at Monte Blanco, a 4 hour hike to 4800 meters. The summit can then be reached in 5 to 6 hours. There is bad scree in a few places. The descent to the trailhead takes about 2 hours. 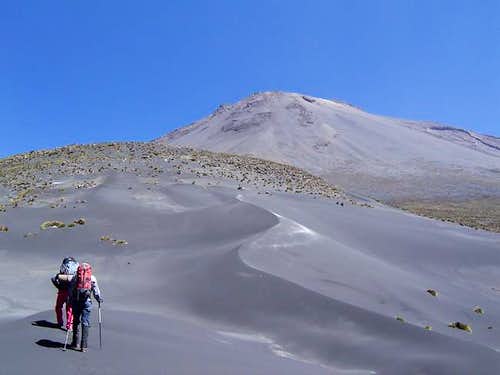 This is the normal route reachable in about an hour from Arequipa by 4WD. The trailhead is at 3400 meters. A hike of 4 to 6 hours gets you to Campo Pirámides Alto at 4610m. It is then 5 hours to the summit and 2 hours descent, mostly on scree, to the trailhead. 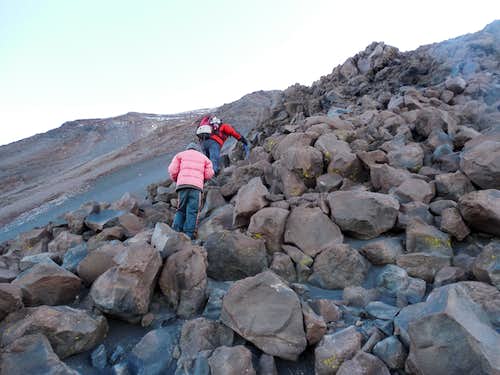 Shaylee climbing high on El Misti from the Grau route.

This is the historic route accessible by 4x4 to the trailhead at 3400 meters (Los Pastores). It used to be the most popular route on the mountain, but robberies have made the route more risky than it was in the past. The route is no longer recommended. 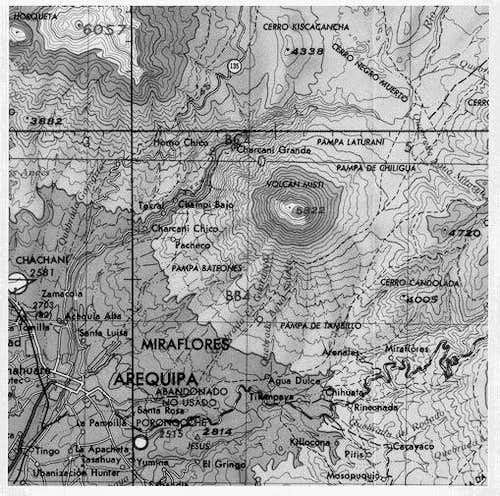 Also consider printing off the section of the Google Earth map which seems to be fairly accurate.

We went with Incaventura for this climb. Their service was excellent and the experience was great. The can pick you up in Arequipa and they offer a variety of routes up El Misti.

No climbing or camping permits are needed for the Grau or Delantera Routes.

A permit is needed for the Aguada Blanca route. When yo u hire a driver, check with one of the travel agencies in Arequipa for details. Permission can take a few days to obtain.

There are many places to stay in Arequipa ranging from budget hostels to luxury hotels.

You can camp anywhere on the mountain. Have a good tent and beware of blowing sand and volcanic ash, especially on the Aguada Route.

The normal camps for each route are as follows: 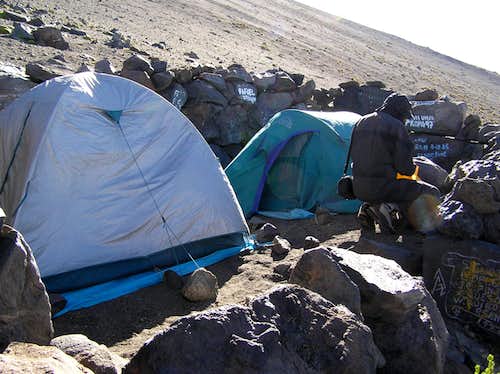 Campsite on the Aguada Blanca Route. 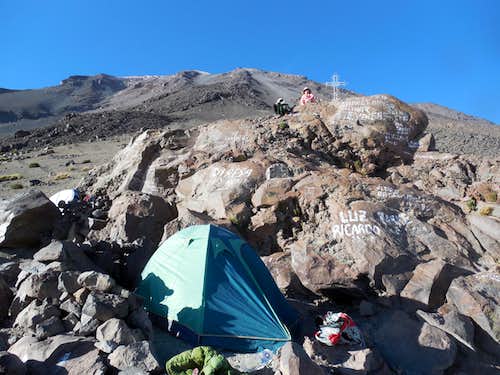 This is a dry area, so the peak can be climbed year round. Mid April through October is considered the ideal time to climb the peak with normally good weather, though night temperatures June through early September can be pretty cold.

November, early December, and April are in between times with mostly good weather, but more frequent cloud and snow. January through March are the wettest months. Crampons and an ice axe are often needed after a snowstorm. 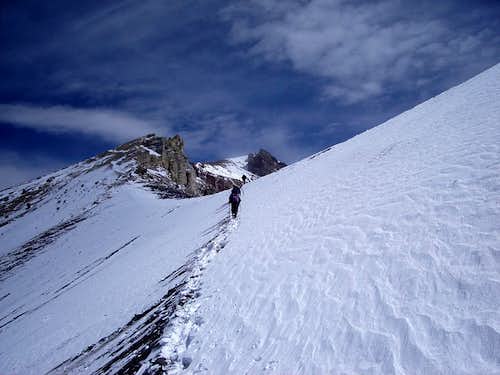