Often mistakenly referred to as “Cordillera Volcanica” (which geologically speaking is only the 50 km range linking Chachani to Ubinas), this Area also includes 2 other ranges: Cordillera de Ampato and Cordillera de Chila, the common denominator being a mountainous landscape dominated by volcanoes most of which are found within the boundaries of “Departamento” of Arequipa. As a matter of fact, mountain logistic services for the entire area are concentrated in the city of Arequipa as it’s the case with Huaraz for Cordillera Blanca.

The volcanoes of the area have huge archeological interest as many where climbed and used by Incas as sanctuaries to perform rituals. Many Inca sites have been discovered, yet may be not all. The famous “Juanita” was discovered on Ampato, not sooner than 1995 and other mummies on Misti in 1998. The geography of the area gives easy access to summits of 5000m and 6000m (many rarely climbed) dispatched within a unique Pampa landscape that also features 2 of the deepest world canyons, those of Colca and Cotahuasi.


Within this area there are 3 distinct ranges: 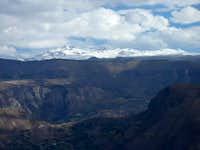 the mountain range that establishes the eastern edge of Cotahuasi canyon and the southern edge of Colca canyon consists, west to east, of four different mountain groups:

- Coropuna, a volcano with a huge horseshoe-shaped crater, features a group of several 6000m summits (including the highest of the whole Area at 6425m) and glaciated terrain.
Map of Coropuna group

the mountain range that establishes the northern edge of Colca canyon consists, west to east, of three different mountain groups:

- Mismi group, located at extreme southeast end of range, is also formed by wide volcanic craters interfering with each other in a puzzle of cirques and ridges. This group features, west to east, the assumed source of Rio Amazonas, Nevado Quehuisha (-15.5261111, -71.7594444) and the assumed highest summit of Cordillera de Chila: Nevado Mismi (5597m).
Map of Mismi group 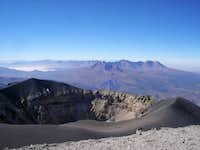 First recorded ascents of most of this range were accomplished in 1972. 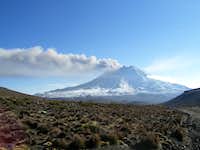 contouring the city Arequipa on its north and east, consists, from west to east, of 4 groups:

- Misti with its almost perfect cone rising at 5821m.
- Pichupichu group, a very eroded volcano with 7 summits of which the highest is at 5664m.
Map of Misti and Pichupichu groups

- Ubinas group, the most active volcano of Peru with 3 peaks of which the southern one is the highest at 5672m. This group is actually situated in "Departamento" de Moquegua.
Map of Ubinas group

To and from Arequipa, 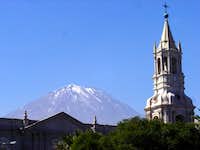 By train:
Arrival by train from Cusco or Puno is no longer possible...

No permit required so far !

The Pampa around Arequipa 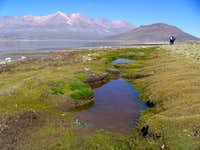 "All the Mountains", a site built to show maps and photos of the highest ranges in Peru

Camping is permitted everywhere. However, for safety reasons, avoid camping at a walking distance of Arequipa suburbs and other big towns.

Altitude of towns and villages of interest, and the road distance between them: 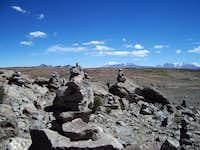