Chachani is often touted as the easiest 6000 meter mountain in the world, and for good reason. A non-technical two-day ascent, year-round good weather, and proximity to a large city are all assets that make it accessible to the general trekking community. While not as climbed and therefore as crowded as the nearby El Misti, one can still find himself on the summit with a large group of people. Yet, it is also possible to be alone on the top. 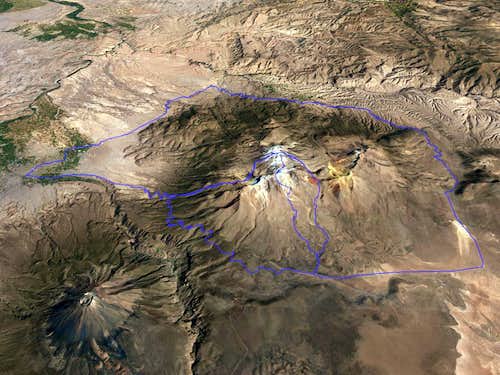 Getting to Chachani from Arequipa (West is up).
Arequipa is on the left, new road to Chivay on top and right, Misti on bottom left.

A 14 or 9-hour bus ride will get you from Lima or Cuzco to Arequipa, while getting there from La Paz will necessarily involve transfers at Copacabana and Puno, taking close to 16 to 20 hours. Arequipa has two bus terminals, so if you are to meet a friend there, make sure you know at which one he arrives. Taxi to downtown for 10S/ in both cases.

There are plenty of flights from Lima to Arequipa and some flights from Cuzco, but the major international flight search engines do not search them all, so you may want to search the airlines' websites individually (LATAM, Avianca, Peruvian Airlines, Star Peru, LCP).
For experienced hikers or mountaineers willing to climb Chachani unguided, the most frustrating part of the "climb" may be getting to the trail heads. While any agency will be glad to arrange a private transport to main trail heads, the price may be almost as high as a guided trip, or you may get booked in a guided trip's transport only conditionally that no more people sign up for the guided trip.
Beware of older websites that claim that you can take a bus from Arequipa to Chivay or Puno and get dropped at a dirt track 9 km from the trail heads, at around 4130 meters. A "new" road from Arequipa to Chivay was opened a while ago and public transport is now at 20.7 km by the road or about 15 km offroad, at 4080 meters. Taxis can still bring you to the dirt track, but most drivers will not go further as it is said that it requires a high clearance vehicle.
If you have your own vehicle, it is possible to drive quite far into the dirt track with a normal car, and even all the way to the trail heads with some off-road driving skills. 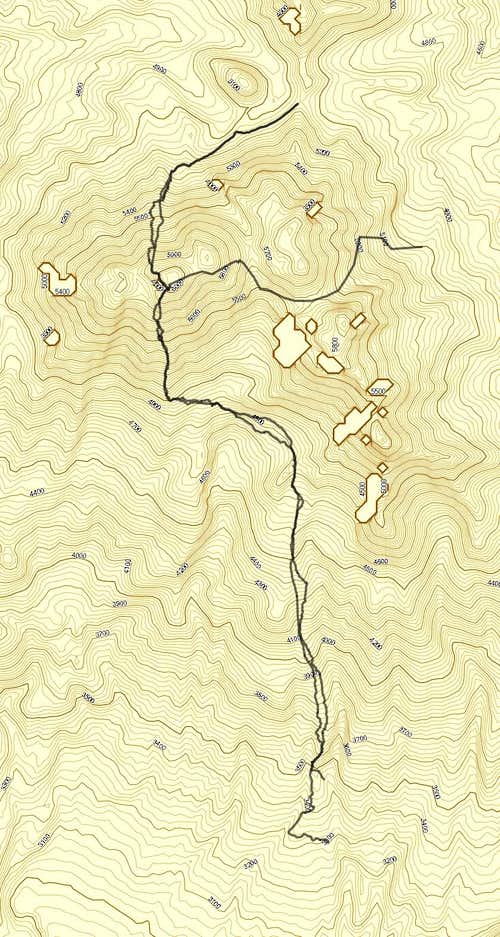 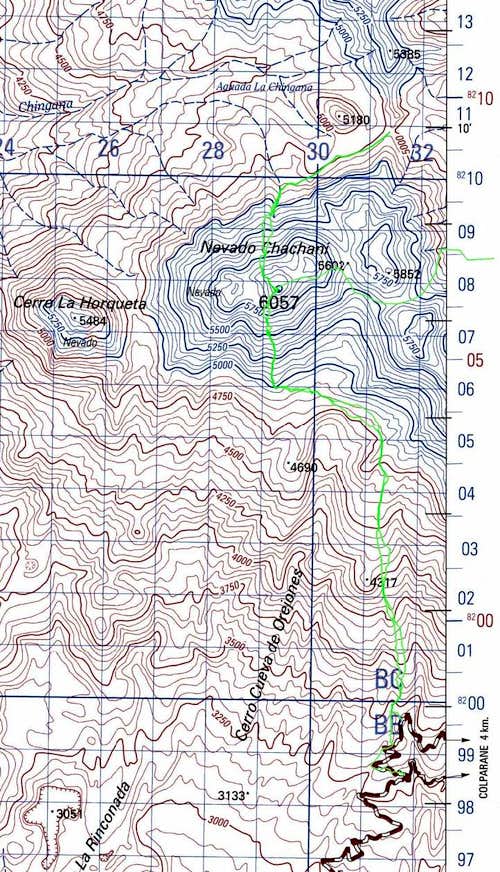 Topo map from US Defense Agency showing all three routes.
There are three main routes up Chachani.
The Azufrera route has been the normal route for years, approaching the mountain from the East. It is a easy route by mountaineering standards (grade F). Some sources on the Internet say that it is now too dangerous due to a recent rockfall, but most agencies' websites still advertise this route.
The Northern scree route is another easy route, approaching the mountain from the North. It may have become the normal route by now as it is also a grade F and it is less exposed and has less altitude difference that the Azufrera route. All trip reports on the Internet on this route seem to be rather recent.
The Cabrerías route approaches the mountain from the South. Its main advantage is the possibility of accessing the trail head by public transport. However, the route is much longer and the altitude difference is much greater. Taxi-ing to the dirt track for the first two routes will get you closer vertically and horizontally to the summit than the Cabrerías trail head.

Chachani can be climbed year-round. Temperature differences are minimal in the region, where it can get to -5C any time of the year at the camping spots (-15C has been reported on the summit). Precipitations occur mostly during the summer months (January to March), and there is more chance of cloud cover. The best time to climb is therefore from the end of fall to early winter (May to July), where the weather is nicer and there is more chance of climbing on snow.
There has been much less snow on the mountain in the past few years than only 5-10 years ago, such that people report doing snowless ascents for almost half of the year (August to January), which involve scree on all routes. Most people should prefer snow over scree.

Camping is free anywhere on the mountain.
There is no water until snowline. Older sources may say that the snow is high in sulfur, which makes it for the least unpalatable. Since the snow is now entirely seasonal and there has been no recent volcanic eruption in the area, melting snow should yield potable water. However bringing a stove up there to carry less water for the descent seems more troublesome than useful to me, and even risky if you are climbing in a season where you may find no snow.

Arequipa (2500m) is not high enough to acclimatize for 6000 meters, and not even for the 5000 meters of the trail heads. But since Chachani is not committing, most people try it nevertheless and suffer. Yet many do succeed. The true summit rate, while unknown, is certainly dragged down by the number of unacclimatized people attempting the climb. Failure for inadequate physical fitness should be far less frequent for the Summitpost population, while failure for poor weather should be very rare.
Cuzco (3300m), La Paz (3500m), Chivay (3600m) and Puno (3800m) are options to spend a few days of tourism en route to Arequipa, but none are really high enough. Is Chachani a worthy enough objective to warrant further acclimatization treks or climbs is a matter of personal opinion, but anything 5000 meters around Arequipa will be harder to access except for El Misti.
There is no proof in Western medicine that coca leaves help altitude-related symptoms.

General camping equipment can be rented in any trekking agency and bought in many shops in Arequipa, mostly located on Jerusalén. They should also all be able to provide you with snow conditions. Waiky Adventours (Santa Marta 101), Peru Adventure Tours (Ugarte 109) and probably other places as well sell and rent crampons and ice ax, the quality of which will depend on your ability to inspect it beforehand. Be wary if they say that their equipment is not back yet on the evening before. The same goes for general camping equipment.
For the normal routes, expect 280 to 300S/ for a public guided tour with transport, meal and maybe equipment, more for a private guide, and marginally less in snowless season or if you have your own equipment. Expect 150 to 200S/ for transport by joining an existing trip and 300S/ to 160USD (crazy!) for private transport. Shop around and negotiate in any season: in the end all agencies pool their clients to the same few guiding companies. In high season, there may be daily departures; in low season, there should be at least weekly departures. If you are alone and have some time, you can ask the agencies to call you back when they have other climbers you can join. Arranging for services from overseas will necessarily cost more and is not necessary. 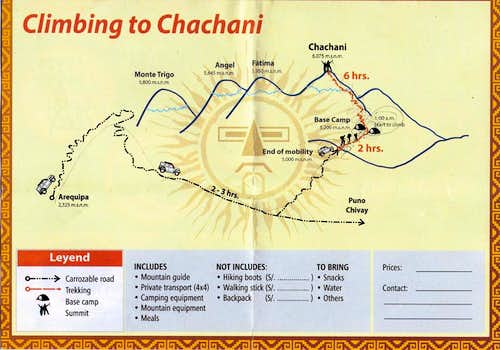 Only map I found in Arequipa
Most tourists will climb Chachani guided, but since you are reading Summitpost, you can climb it unguided. There is no need for a guide as far as navigation is concerned. When there is no snow, anyone with some trekking experience will do fine without a guide, but do read on acute mountain sickness and other altitude-related problems. When there is snow, some knowledge of basic crampon and ice ax techniques is needed, but this is not full-blown mountaineering. While I cannot advocate learning these techniques online the day before the climb, I am sure many people have done just that and succeeded.
For 1:100000 topographic maps, look for IGN sheets Arequipa 33-s and Characato 33-t. I was unable to find them in Arequipa. See the external links and print your own.

Chachani or El Misti?
There is cell phone signal on the Southern and Western faces of the mountain, and on the summit, but there is none on the Northern and Eastern faces.
Some websites list Chachani's elevation as 6057 meters while others list 6075. US Defense uses 6057 on their map. The highest elevation I have found in the SRTM3 database is 6056, while on Google Maps API, it is 6059. So while we would all like to believe that we have climbed a higher peak, the 6057 mark seems more realistic.

If you are looking for the easiest way to bag a 6000 peak, try Acotango: 4 hours from La Paz, easier acclimatization, driveable to 5600 meters, hiking with a daypack only, more snow, and much less popular.