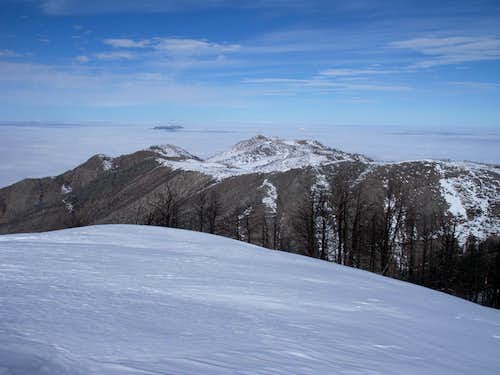 "Flux" peak is a the highest point of the northern most group of small "peaks" in the Stansbury Mountains which are separated from the Onaqui Benchmark group of peaks by a large saddle that connects then northern-most fork of Muskrat Canyon on the west and Miner's Canyon on the east. Unlike the majority of the highpoint ridgeline that connects the entire Stansbury range from I-80 to Johnson's Pass, which is very thin (only a few feed wide in many areas), the ridgeline area near flux peak is more like a group of wide rolling hills.

Flux peak has an official elevation of 8003' feet and is listed as peak 8003' on most topo maps. This peak happens to be the highest peak in the Flux Quadrangle and is therefore listed by some peakbaggers as Flux. Because of the small amount of prominence (503') and proximity to so many other higher, prominent, and to be honest, more spectacular peaks, Flux sees very few visitors. Those few who reach this inauspicious mountain top will be rewarded with spectacular views of the surrounding areas including but not limited to Stansbury Island, the Great Salt Lake, the Cedar mountains, the Oquirrh mountains, and best of all a feeling of treading where few other have.
To the Northeast of this peak is the flux quarry where 500,000 tons of crushed shale was removed and used for the Union Pacific railroad beds during the early 1900's. Find more information about it here. I'm not sure if the quarry is where the name flux originated or if the area was already called flux before t he quarry was opened. 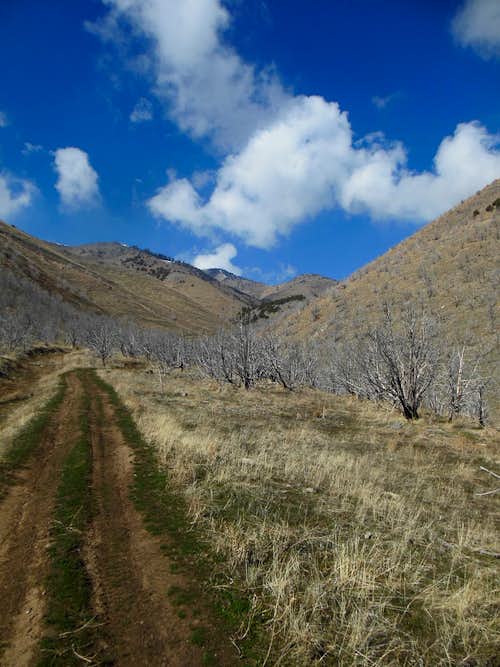 From SLC: Head west on I-80 for roughly 35 miles. Take exit 84 and head south on Highway 138 towards Grantsville (heading north at this exit takes you to Stansbury Island). After about 5-6 miles you should see the Utah Sea Base operation on the east. Just past the Sea Base you will see the "Old Lincoln Highway on your left. Directly across from this intersection on your right (west) you should see a dirt road. Take this dirt road about a mile towards the mountains until you reach a junction.
If you have a 4WD vehicle head West (straight) at the junction and drive as far up the ATV trail as you can toward the mouth of the canyon.
If you are in a 2W-drive vehicle continue on the main dirt road to the North and park anywhere near the quarry and walk your choice of ATV/4WD roads around the hill to the west to the mouth of Miner's Canyon.
Muskrat Canyon - Directions to the Muskrat Canyon Turnoff from SLC, UT

From SLC: Head West on I-80 for roughly 40 miles. Take exit 77 (Rowley / Dugway) and head south on Highway 196 (Skull Valley Road) towards the Dugway Proving Grounds. After 7.5 miles you will see a turn-off to a gated entrance to Muskrat Canyon and the Muskrat Fire Station. In the winter this area is gated and you must park here to start the hike. In previous years this area has been closed to vehicles year round due to re-vegetation efforts after a large fire. If the gate is open you can drive this dirt road to the mouth of the canyon 3 miles away. 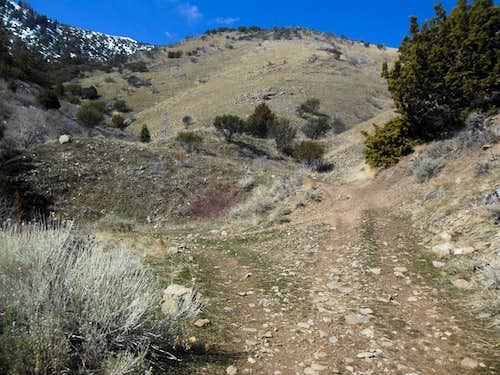 High up on the ATV trail in Miner's Canyon
Distances are from the Junction at the mouth of the canyon:
0.0 - Junction at mouth of canyon - take a right heading up Miner's Canyon ATV trail.
1.4 - Junction - stay right on main ATV trail.
1.9 - Junction - stay right and begin switch-backs.
2.5 - Pass by some interesting rock bands
2.7 - ATV trail runs into the back of the canyon just shy of 7200 feet. Turn right here off trail and head up a steep grassy incline ~250 feet to the ridge-line above. Once on the ridge-line it is easy class 1 (although pretty steep at times) up to above 7,800 feet.
~3.0  (depending on your how much switch-backing you used to get up to the ridge-line) You should be at the top of Miner's Canyon @ 7,800 ft.
The area above Miner's Canyon over to Flux peak is a large rolling meadow / mahogany & aspen forest. Choose your own path over to Flux peak (the Northern-most bump in the area).
The route I took from the top of Miner's Canyon to Flux was about 1.7 more miles. This mileage could vary greatly depending on your choice of route and how many other minor bumps you want to hit on the way.
~4.5-5.5 - Summit of Flux Peak.
Muskrat Canyon
Visit Eric Willhite's trip report for information on this route.

No red tape - this entire hike is on Public Lands. The road to Muskrat Canyon is closed in winter and maybe closed to vehicles year round due to re-vegetation efforts. Miner's Canyon is open year round. Be careful if you park near the Quarry on the Miner's fork side. This abandoned quarry area is used by gun enthusiasts as a practice shooting area. The quarry is littered with shells and stuff that has been shot to pieces.

Flux Peak can be hiked year round. Due to it's lower elevation compared to other peaks in the area it is a great spring/fall hike or winter snowshoe. Summer hiking this peak would also be fine, however, expect very hot temperatures on the lower part of the mountain and no reliable water sources.

Much of the land surrounding Flux peak is public land where camping is permitted. The closest official campgrounds are at Grantsville Reservoir and South Willow Canyon 15 or so miles to the south. Nearest hotels would be in Tooele or Lake Point to the East.