The normal route to this beautiful mountain, is usually rarely climbed; mostly downhill for those who want to climb to the most important "cresta delle Clochettes". This route has a bad reputation. Which today can be considered more legend than reality. The quality of the rock is almost always bad, but not disgusting as it is described by most reports, often written by people who have never done it.
However, in the case of crowding, the danger of falling stones could be high. But do not worry, because the crowding on this mountain is impossible. The top is reached every summer for a maximum of 10 or 20 climbers.
The isolation and the length of the path to get to his base, increase its charm and wilderness. The normal route runs through the center of the SE wall, wide, rocky and with a slant of more or less 45°. Along it, the rock changes color from gray to reddish, brown and a strange violet. The difficulties never exeede II/II+. 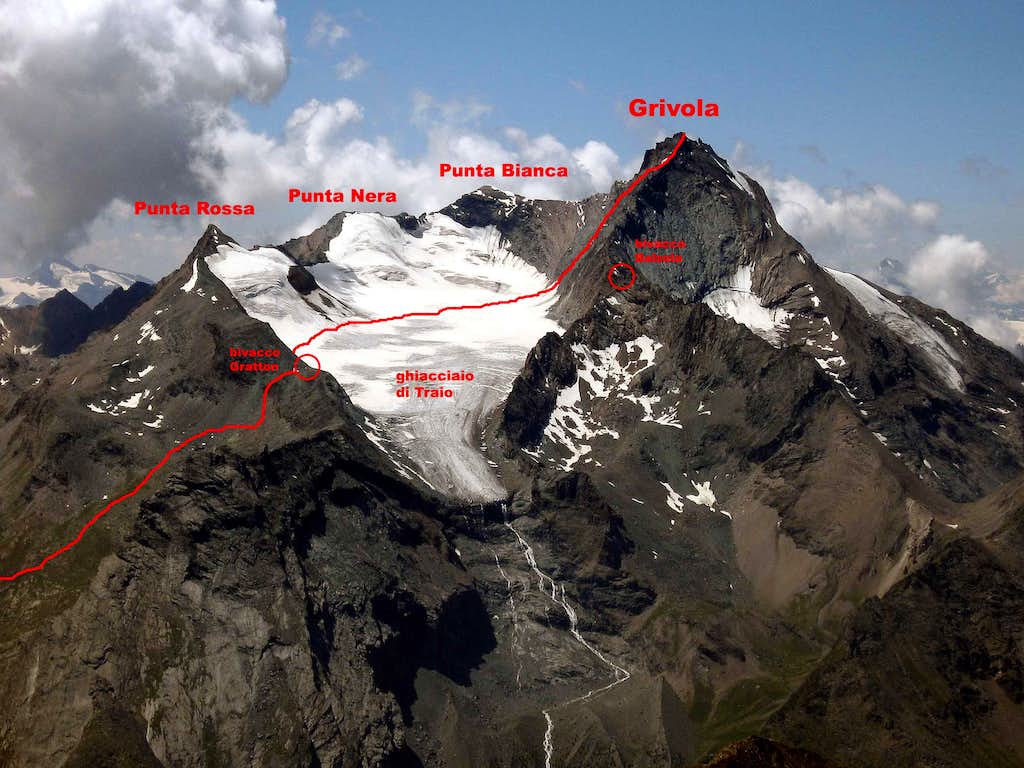 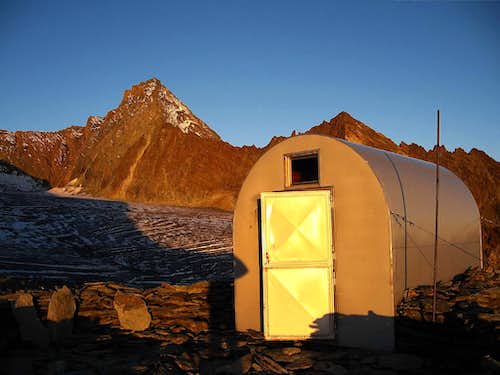 Grivola and Biv. Gratton in the foreground.
Route to the bivouac:
From the village of "Cretaz" 1.499m (Cogne valley) not far from the famous "Cogne", take the path 26 that starts from a carpark beside the valley road.  The path climbs steeply and fast into the woods, to a small home of the park ranger (2.296m Parco Nazionale del Gran Paradiso).
The path continues through meadows, less steep up to some huts abandoned (Pousset superiore 2.529m). This is the last point where you can get fresh water. From here, the trail climbs steeply rocks, until the "colle Pousset" 3.198m from which the bivouac Gratton is easily accessible. 3.202m.
In some periods there is a small water source in the nearby of the bivouac.
But for safety it is better to get it along the way. The bivouac is in sheet with 9 beds. It has some poorly cooking gear, but it hasn't gas for cooking.
There is also a route from the refuge "Vittorio Sella" 2.534m,  placed above the Valnontey.  The normal route can be reached also from here, across the "colle della Nera" 3.491m.

Ascent:
From the bivouac continue to outh along the trail in the darkness following the indication of some stonepiles. The trail descends to the glacier Traio. From here some chains permit in about fifty meters to touch the flat glacier. Be careful because some chains are very exposed. 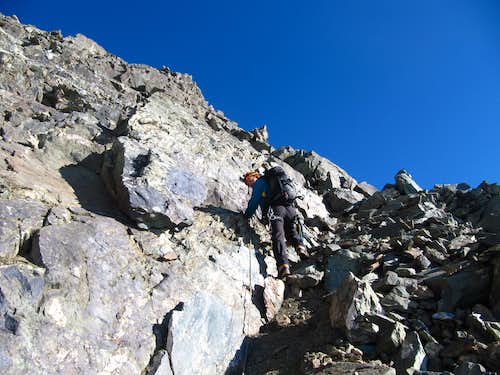 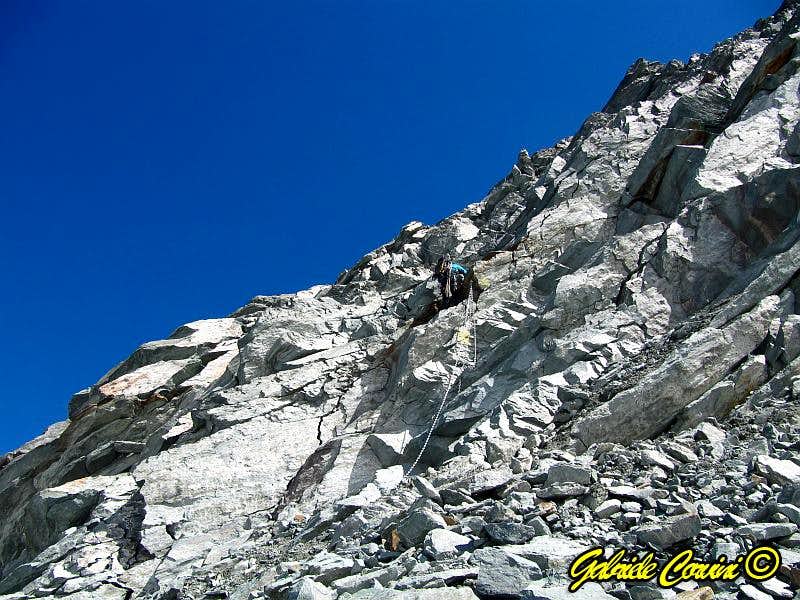 The glacier is fairly flat, with few crevasses placed parallel to the center of it. Then make a semi-circular route remaining at the base of Punta Rossa and then point to the base of the SE wall of Grivola. The route begins at the point where the glacier leads with a steep snow slope at the base of the wall. If the wall is completely dry, you should leave there the ice ax and crampons for being as light as possible.
Climb the first rocks often bathed by water (which may be frozen. Careful!!). Two belay anchors indicate the direction and may be useful to make secure. Once you get to the center of the wall, you realize to be in a very broad couloir.
Never keep its center, but the left side (going up). Check the crest on your right, because it is from there that you will return back. The climb in the couloir is never difficult, but very slippery. There are some rare and faded yellow signs that will soon disappear. More or less than 3/4 of the wall that culminates with large reddish pinnacles, move to the right until you reach the most convenient point of the ridge coming down from the summit. Overcome the crest and making a flat sideways, reach up to the north ridge "of Clochettes". Here the yellow signs become visible again. Do not pass it, but continue on its south side, towards the summit that is easily reached. (4 hours). 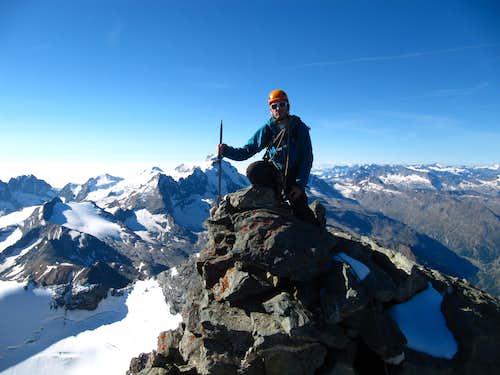 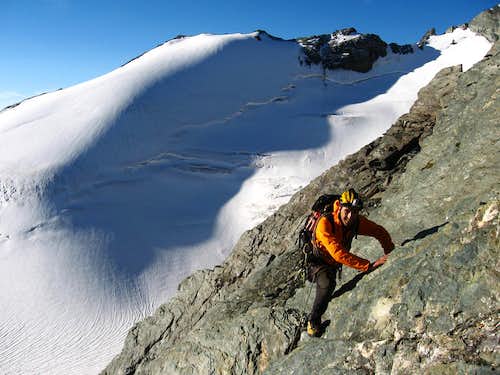 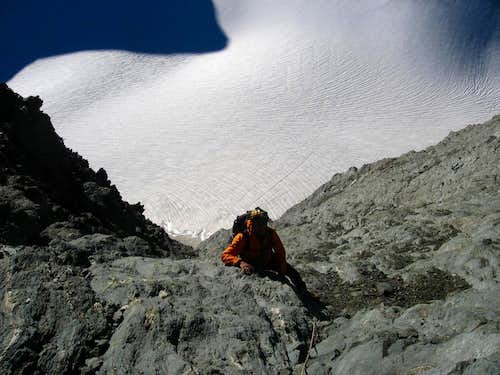 Descent:
Downhill, you can follow the same itinerary, but it is a bit dangerous and without the possibility of secure. Alternatively, you better get down below the summit following the yellow signs up to the beam between the two ridges. Rather than pass the second and descent the couloir, it is better to stay on the north side of the ridge (never on the edge).
From here a series of stonepiles indicate the way to the right point where climb over the ridge and rappel down. The ridge is a continuous of II/II+ with discrete rocks (much better than in the couloir), pleasant and intuitive.
Attention to recognize which is the last stonepile. From here the ridge get down into a ravine. On the opposite side there is an anchor (blue color) for abseil, above a steep chimney. A 30m rope is enough to reach the base of the chimney (maybe 40m is better).
Here you reach the base of the couloir from wherefrom you climbed up. Two more easy rappeling and you are back on the glacier. As the chimney is very steep, this route can be made only downhill. 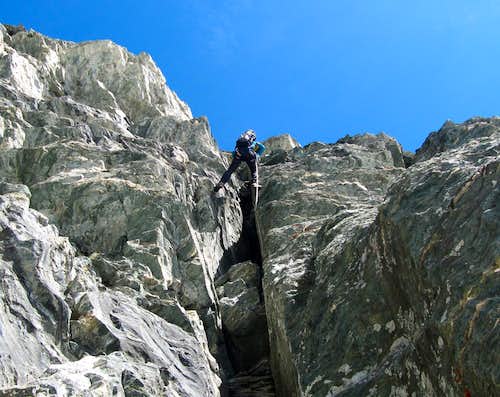 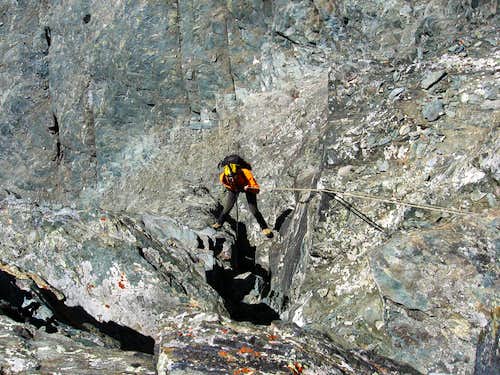 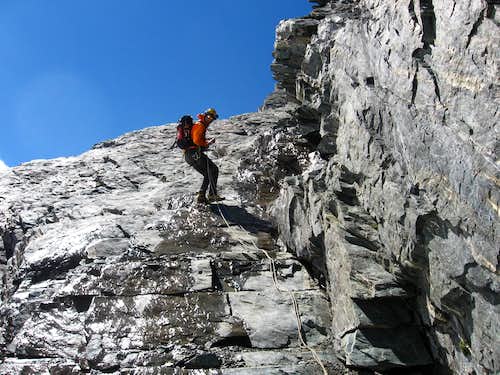