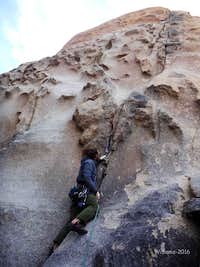 Hawk's Nest is one of only four- three to four starred trad routes in Miramontes Joshua Tree guide. Although this would normally make it a common objective in the park, its remote location keeps it much quieter than the others.  Another classic, but remote, route to combine with Hawk's Nest is Lesbian Lust, 5.9***.  Both areas share the same initial approach and splitting time between both makes for a decent day of climbing.

I climbed several of the other routes at the Hatchery besides Hawk’s Nest and they were not very memorable. Two of them worth doing however share the same finish: Dangling Digits, 5.8** and Down Where the Goblins Go, 5.10b*. Both of these routes finish on a spectacular, albeit short, 5.8 splitter. Their wall is a separate wall to the left of the obvious Hawk's Nest wall. Hawk's Nest had a fixed rap (nest of nuts-2016) and you can walk off those other two by scrambling down west, behind the Hawk's Nest wall. 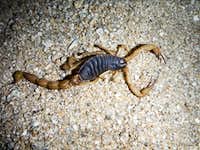 Miramontes guide is not very clear on where to park for this whole area in Pinto Wye sub-named Oz. The Hatchery is located in a short valley named Valley of the Voices. He speaks of an “information board” which relates more to a board located at a significant trail head on the right, after you pass through the park fee station. Rather there is an interpretive placard on the left which is the ideal parking spot to reach this part of OZ. This parking spot is approximately three miles in from the fee station. He discusses how long it is from the fee station but says the parking is on the right (which it is only if you are coming from Jumbo Rocks). Depending on the time of year, there is not much of a trail whatsoever (2016) from this parking area up to the correct valley. The general climbing area of OZ includes several canyons. Valley of the Voices does not have a lot going on besides the Hatchery in terms of good climbing. Oz Canyon's obvious features, which can be seen from the road, are different climbing areas to the east of the valley that takes you to Hawks Nest and Lesbian Lust. You need to gain a wash immediately from the parking area and head west around the toe of a rocky hill. Then turn left up a hidden broad valley wash. You are gaining elevation at all times. The Hatchery is located up a steep rocky drainage on the left side. There is a large feature that becomes visible from the valley floor on top of the ridge to the left. That is named Dark Castle and has dark rock. The steep rocky drainage you want to ascend on the left is before you stand directly below Dark Castle, just a few meters back. Depending on where you parked, this could be up to an hour hike.

Routes Listed Right to Left as you face the North Walls