Bell Rock is an iconic Sedona feature, and the site of one of several 'vortexes' in the area. Many people scramble to near the top of Bell Rock via a fun and occasionally exposed scramble up a Western bowl to the ledges just below the top. Of those, few climb the final 82' pitch up the final summit spire. Rated 5.8, the route was originally climbed by Bob Kamps in 1957 (hence, Kamps Route) and one of the older routes in the Sedona area. The original route included several hangerless bolts, that when replaced, were less hangerless to maintain some of the original adventure to the route. 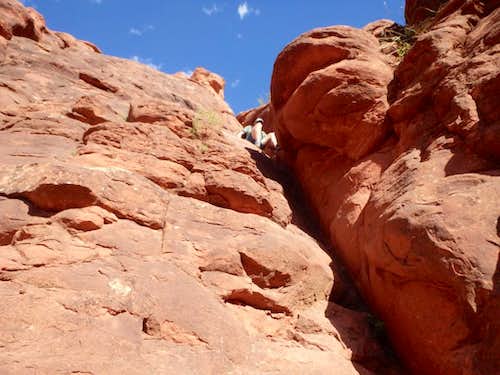 Scrambling on the approach
From Interstate I-17, exit for Oak Creek Village heading on Route 179 towards Sedona, drive 8.4 miles passing through the village of Oak Creek through several roundabouts to the Bell Rock Vista and Trailhead. Park here. If the lot is full, you can drive another mile further north to the Courthouse Vista and Trailhead. A Red Rocks (or America the Beautiful) Pass is required at both lots. 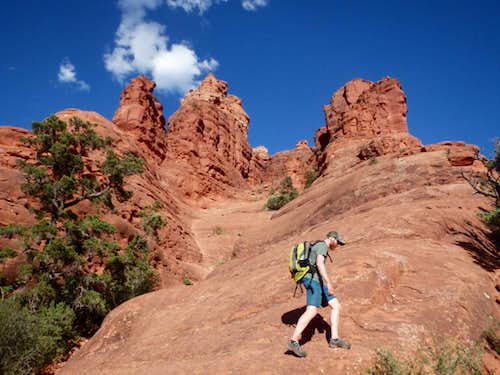 The western approach bowl
From the Bell Rock Vista Trailhead, hike briefly east, taking a left onto a Bell Rock Trail as it more or less heads directly towards Bell Rock. If parked at the Courthouse Vista Trailhead, head south on the Bell Rock Connector Trail to the Bell Rock Trail, again heading directly for Bell Rock. Either approach will bring you to the west face of Bell Rock with a prominent, deep red rock bowl.
Leave the main trail here usings one of the many use trails to enter the western bowl. Climb the sometimes steep slabs up about 2/3 of the way up to where the chute splits. To the climbers left is class 4, to the right is slightly exposed class 3, both of which will bring you to the plateau just below the summit spires, which will have been on your left during the ascent. Traverse the ledges to a notch to the north, with the summit spires to the left, and a flat ledge to the right. A summit register is located on the rock ledge on the right. Once at the notch, follow the ledge around to the left (west) where you should spot the first bolt and start of the climb. 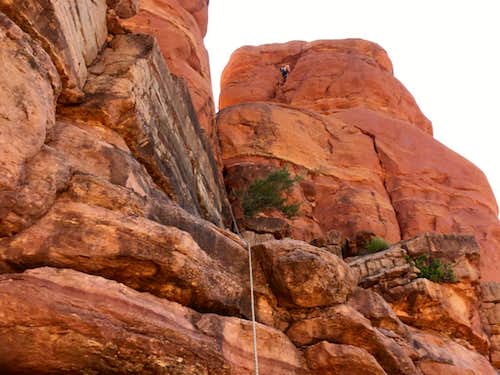 Kamps Route 5.8. You can see the entire pitch from the start.
The climb itself can be broken into on or two pitches. We initially attempted it as one pitch, but had alot of rope drag for the mantle crux, ultimately breaking it into two. Clip the hangered bolt to start the climb and head up 5.easy ledges one platform up. Climb the obvious dihedral 20' to the notch between the shorter south spire and the higher north spire. The dihedral has several bolts and multiple places for small cams. The notch is a good intermediate belay spot for splitting it into two pitches. I personally felt like this dihedral was trickier than the mantle crux, although there are some nice jug holds up and to the left, as well as a shallow ledge halfway up on the right.
From the notch, a quick chossy traverse right puts you at the crack heading up the northeast face of the summit spire, with multiple bolts, some with hangers, some with just a nut. The final move is the crux, where you have to swing wide out of the crack and mantle on to the summit. Two large bolts make a nice anchor at the summit.
To descend, rappel from the two bolt anchor down to the start of the pitch. A 50 meter rope will just make it.

Helmet, harness, belay device. A set of draws for the bolts as well as some small nuts to sling the hangerless bolts. A set of cams would be helpful for the dihedral and the mantle crux, which looks like it takes a BD #4 (we had only brought up to a #3, and it was definitely undercammed). I would bring extra webbing to back up the anchor if needed, there's no telling the condition of the webbing when you get up there. Or better yet, bring a chain system for the climbing world to thank you for!
A doubled 50 meter rope should just make for the rappel. 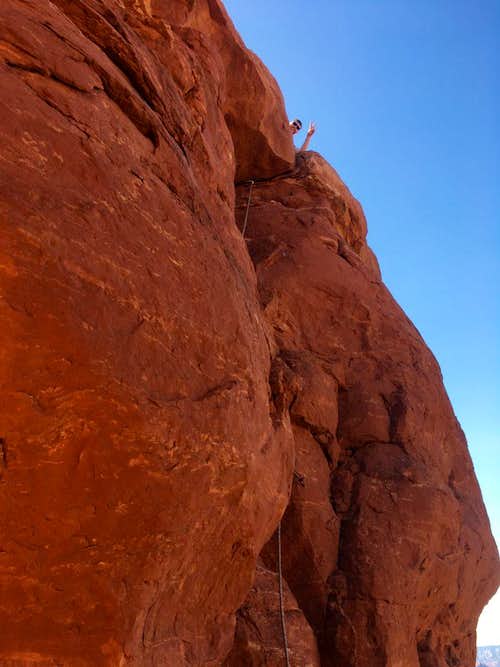 The upper half and mantle crux