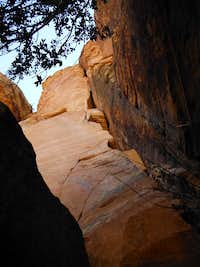 Crux Pitch
Earth Angel is no doubt the tallest and most committing route/tower in the Sedona area (700’ of climbing). It is located at the very back of Mormon Canyon (1.5hrs hiking to the base). Its main route carries its namesake, but unlike most Sedona towers, it is large enough to offer future route development. Located in the very back of Mormon Canyon, surrounded by walls every bit its height, gives it a majestic feel not to mention good shade on the entire route for most of the day. MP.com references Earth Angel as “surely the tallest towers in the southern deserts”. Someone needs to make a tower bagging trip to Moab. That said, Earth Angel is plenty committing compared to most towers/routes in the area, i.e. the Mace, etc. I saw a published IV grade given to the route in a Falcon Guide book which of course is a joke compared to much larger desert climbs given the same grade. It is a relatively old route as desert climbing goes (1975- Hardwick and Baxter) and I am quite surprised that it does not see more ascents than it does based on on-line summit log activity as well as how little the climbers trail is trodden to the base of it. 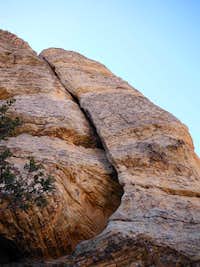 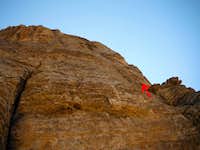 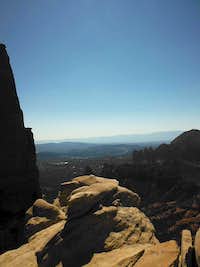 The first two pitches are quite chossy. I led all the pitches and chose to enter the chimney as soon as I could to avoid pulling off a hold. The consistently of the sandstone out on the face of Earth Angel is similar to Fisher Towers near Moab. By entering the chimney early you set up for a full 200’second pitch in the chimney that is pretty entertaining for the grade (5.7) despite being chossy and loose. The third pitch (5.10) requires full on climbing for the grade utilizing a variety of techniques/options. I took large gear (C4 #5 and 6#) and treated the crux climbing of the route as an off-width versus stemming out and using face holds. Despite being burly, the third pitch protected quite well and the rock was much better than the chimney you just left below. The fourth pitch is a pleasant uneventful 5.9 corner crack to a comfy belay. All the belays utilize comfortable ledges. The fifth pitch (5.10-) gets a lot of noise on MP.com, but I found it to be straight forward and well protected and not nearly as difficult as the third pitch. There is a manky bolt that is not necessary due to a bomber C4 #.4 placement right next to it. The short run-out traverse above the finger crack is 5th class climbing on huge jugs. The last pitch is uneventful. The raps are quite committing on the other side of the tower and deserve attention.

Take Jordan Road north out of downtown Sedona. At the T-intersection turn left (W. Park Ridge Drive). The paved road turns into a dirt road that leads to a fee-use trailhead ($5-2012), a common theme in Sedona. Don’t take any of the trails, instead walk through the equestrian parking area and drop down into the wash that heads for Mormon Canyon (north). Stay in the wash for approximately an hour, almost to the end of the canyon (passing a more common tower named Goliath about half way). In 2012, the faint steep wash leading up to Earth Angel was not well marked and hard to locate out of the main wash (but the tower is easy to spot via having a photo handy up on the right hill side, approximately 500’ above). This route does not get done as much as one might think and the brush grows well on both banks of the canyon. In any regard, there normally are a few small cairns marking the way. Your goal is to pass Earth Angel just a bit while staying in the main wash and then angle back up to its eastern base. The route is well shaded by the enclosure formed by tall walls surrounding Earth Angel. The rap descent for this tower actually descends way back in the enclosure. The route starts at an obvious ledge that cuts in from the right a good 5-10 minutes outside of the very depths of the enclosure. It follows a chimney system up and left of the huge double-roof above.

1st Pitch- 30m- 5.6/ The options of where to go on the first pitch are numerous. Keep in mind the first two pitches consist of the worst rock Sedona has to offer. The path I took and suggest is following a short crack right off the platform. At the base of the next crack heading into white colored sandstone, straight up and slightly right, I opted to traverse left on run-out but easy ground into the chimney. I initially started up that white rock crack above, but it is damn chossy and the holds are suspect. Traversing early sets up a longer chimney pitch, but it can still be done to the treed ledge above in 200’.

2nd Pitch- 60m- 5.8/ Start up the chimney passing a slung feature (2012). The deeper you go into the chimney, the dirtier it is. Use classic chimney technique to gain some ground until you can pull out and climb cracks on the left wall and above. Re-enter the chimney and climb cracks inside (again quite loose) to the left exit above. A good gear belay can be had in the floor and then down climb a couple of meters to a more comfortable stance near a tree limb. A full 200’ pitch.

3rd Pitch- 45m- 5.10/ This is a stout pitch for the grade requiring a variety of climbing disciplines. Start up the chimney. As it pushes you out you will have great gear and a bolt. Either use off-width technique (more difficult, but better protected) or stem and use holds outside the crack. Several exposed meters later finds you back into a secure squeeze chimney (C4#6 protects if you brought it). After a few squeeze chimney moves the grade backs way off to the top of this chimney. Continue up a few meters of easier ground to the base of the next obvious pitch by climbing up and right to a medium gear belay in the left side of a white pillar (C4 #.5-.75).

4th Pitch- 30m- 5.9/ The fourth pitch is a standard hand and finger crack/corner desert pitch with plenty of features and is well protected. Place small to medium gear at will to the top of the pillar with a comfortable belay (C4 #.3-.5). Supposedly the FAer’s burrowed through to the other side at the base of this pillar versus taking the obvious corner. I have no idea why.

5th Pitch- 45m- 5.10-/ A lot is made to do over this pitch on MP.com. To me the pitch was straight forward and protected well. It was much easier for me than the second pitch and not nearly as run out as I was led to believe. Ignore the crack straight above and follow easy ground up and right to the base of a finger crack (can’t see from the belay) with features. Place several small pieces (some off-set cams and small to medium wires work well here) and climb the small crack with good foot edges past a manky bolt (great C4 #.4 here, so no need to clip the bolt, it is useless anyway) and continue past a decent piton (2012) and another solid small cam placement at the top of this crack/runnel. Then traverse right on easy ground to huge jugs (much larger than conventional “chicken heads” as they have been referred to). Sling the first one to protect your second and then head straight up on more jugs to the large flat ledge below the summit. This section is not nearly as run-out as typical Jtree or Red Rock 5th class finishes. Establish a gear belay in the floor or use the tree.

6th Pitch- 30m- 5.7/ Follow the obvious corner on decent rock up from the tree passing another tree to the left and then back right up the 5th class face to the summit.

The descent off of Earth Angel Spire is quite committing. At the opposing end of the small summit block, take a double rope rap to a ledge. Some internet beta out there referenced staying climbers left to avoid loose blocks. Actually stay center to right to avoid loose blocks. The next rap anchor is hidden under a roof. Take another full double rope rap down and across a chasm to the opposing wall at a small col. An old fixed station is at the col proper, ignore it and go with the fall line to a modern (2012) fixed rap on the opposing wall. On the next rap, it is important for the last man down to pull the knot over the lip. The next rap anchor is climbers left. Watch the cactus on pulling this second to last one. Then a single rope rap down a chimney. Follow the chimney with the rap to avoid pulling your ropes down into the poison ivy patch beyond. Return to the base of the route in five minutes.

Double ropes are required for the raps. Single rack from C4 .3 to #6. Double rack from C4 .5 to #4. I definitely never used both #3’s and you could leave them both behind if weight is a concern. I did use the 4’s, 5 and 6 on the third pitch as well as the 4’s and 5 on the second pitch and thus recommend bringing them. I used no wires, but did bring small off-set cams which were useful on the 5th pitch since I had no wires. Half slings, half draws. Helmets are a must, it is a chossy route and specifically the second pitch belay is exposed. This route maintains shade almost all day, so jackets advised if late fall through early spring. Long pants advised no matter the temps to avoid poison ivy on the descent.