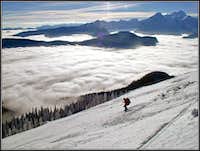 Skiing from Baba
Routes can and should be described on separate pages, I know. But that is worth doing only for major routes, which need a description. However, there are many simple tours which are described on mountain or area pages with one or two sentences. But they might still be a goal for a nice day. So here I would like to name the majority of them on one place and give also some basic info about each. 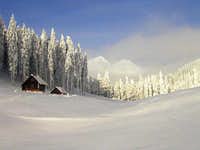 Bor Sumrada: On Pusti rovt
Only in highest regions Karavanke/Karawanken are steep and rocky, and so unappropriate for tour skiing. And that holds more or less only for northern slopes. All the highest summits can be skied down from the very top, but some ski tours are already alpinistic, requiring perfect conditions and the full mastery of skiing technique. Then comes the majority of Karavanke/Karawanken summits - rounded, not too steep, offering great panoramas, especially on Julian Alps. This is the paradise I'm talking about. Goals, appropriate for almost the whole skiing season, some of them also in a hard winter.

Stretching some 120km in the West-East direction, Karavanke/Karawanken look very different from the southern and the northern side. The southern side is more grassy, opened, fine for skiing if snow conditions are good (not too late). The northern side is rocky on higher regions, through rocks some fine couloirs are cut, then some steep scree slopes come and then forrests, through which a network of forrest roads is cut.