In the 12 km long crest of Košuta, only a few mountains are really dominant - the long wall makes an impression, rather than a distinct summit. That's also the case with Kladivo / Hajnžturm, which is a nice mountain, a great view point and is also having a high and attractive north wall, but overall it rises only some 200 meters above the crest line. From the distance an appealing feature of Kladivo is a rock tower, rising like a big tooth from the northern ridge. In the western part of Košuta, Kladivo is the highest summit, exceeding Veliki vrh for a few meters.

With Veliki vrh Kladivo / Hajnžturm is connected by a high ridge, coming first over Kofce gora, 1967 m, then over the W-SW fore-summit of Kladivo, called also Mali vrh / Kleiner Hajnžturm, 2036 m. Towards the east, a more narrow and rocky ridge descends, ending on the relatively deep notch, called Škrbina, 1869 m.

The southern slopes of Kladivo are mostly grassy, intermitted by rocks and some picturesque towers. Towards the north, Kladivo has some 1000 meters high, rocky wall, hosting several classical rock climbs. In good conditions, also skiing is possible from the summit, the normal ski tour goes of course towards the south.

As said on the other pages, on the southern side of Košuta there is a nice high plateau on the altitude of some 1400-1500 meters, where nowadays mountain roads reach several picturesque alpine meadows. Below Kladivo, from the west towards the east these meadows are: Kofce, Ilovica, Šija and Pungrat. From them, the summit can be reached in two hours. The whole southern side of Košuta is one of the best areas for mountain biking. From Tržič town you can make an infinite number of nice tours by mountain roads, reaching up to the altitude of 1500 meters.

As from the whole Košuta range, also from Kladivo the panorama is very broad. Nice is the view along the ridge itself, on the central part of Karawanks and on the more distant Kamnik and Savinja Alps and Julian Alps. Especially these are nicely seen through the frame between Begunjščica and Stol.

See the parent pages of Košuta range and Karavanke range to get an idea how to get close to Kladivo from the Slovenian and Austrian side. From the Slovenian (southern) side the most common approaches are:

Remark: The GPX file in the header is the Hike #4 - round tour from Pungrat alpine meadow, with the visit of also Veliki vrh and descent via Kofce meadow (Hike #1). 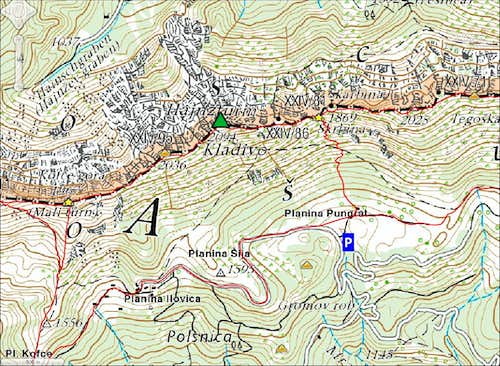 This is a quite common and used approach, but not the shortest one. Up to the main ridge, below the summit of Kofce gora, this route is identical with the ascent on Veliki vrh. From there, you go by the main ridge left on Veliki vrh, right on Kladivo. Very recommendable, quite easy (by the Swiss hiking scale T3/T2), 2 h.

Description: From the hut you go by the marked path in the northern direction. Where the path reaches the southern ridge of Kofce gora, the branch for Veliki vrh goes left (across the slopes), while you go by the marked path which keeps to the ridge. A bit higher there's another crossroads on the ridge. From the right a good (not marked) path comes up from Planina Ilovica. From there on, the path by the ridge becomes steeper. On one place it crosses by the eastern side below the ridge, using a narrow, a bit exposed ledge. The passage is short and above it the path is easy again. In some turns you gain altitude and come on the main ridge of Košuta. The bump there is called Kofce gora, 1967 m. From there, you turn right and go by the main ridge towards the east. The path crosses grassy slopes, and partially goes also by the main ridge. After it passes the fore-summit, from the right the path from Šija meadow joins and we are soon on the highest point.

It is better to go from this meadow towards the east and ascend Kladivo directly from Šija meadow. But if you want, you can go from the upper part of the meadow (inscription on the plate) towards the NW. The path is not marked (only the beginning and the end), but well beaten. After gaining some altitude, you exit on a broad ravine, filled with a scree field. The path crosses it horizontally, goes below a rocky crag and then ascends in a few turns quite steeply on the southern ridge of Kofce gora. Then on top, as described above. Easy, by the Swiss hiking scale T2. Some 1 h 45 min. 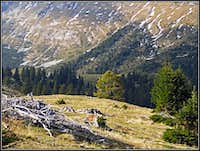 This alpine meadow has a form of a flat, grassy shoulder which the road detours by its southeastern side. On the western side of the shoulder, towards Ilovica meadow, an unmarked path goes directly up towards Kladivo. The path reaches the main ridge between the western fore-summit of Kladivo and the main summit. By this route the ski tour would go in good conditions. Some 1 h 30 min.

If doing a round tour, this is the most recommendable ascent, because you do a more demanding part by the east ridge in ascent and then return towards the west, where paths are easier. The route is very nice, by the Swiss hiking scale the difficulty would be T3. Time: 2 h. Description: From the parking place, cca 1425 m, you walk to Pungrat meadow. Just before the hut you deter left (inscriptions), towards Škrbina notch. On the meadow the path can not be well seen, but when reaching the woods, it appears clearly and from then on you have no more problems. In several turns you ascend through the woods and above over a quite steep, grassy terrain. Right above, already below the ridge towards Tegoška gora, you see a few picturesque towers. To Škrbina notch, 1869 m, you need some 1 h 15 min. The notch is quite picturesque, guarded by a high and steep ridge elevation on the western side and a rocky wall on the eastern side.

There you turn left, cross the steep grassy slopes and above the grassy cone gain the main ridge again. Panorama gets broader and broader, soon you see also the summit of Kladivo. But the ridge will still challenge you a bit. It consists of several rocky heads. The path detours only one of them, others are crossed. On two places there are short exposed sections, where the path is protected by steel cables. There are no real difficulties, but some care is needed. Also a few other places where there is no protection, on the steep grassy slopes some care is needed. So from the notch you will need on top some 45 minutes.

From Skarbina inn (or from Hajnž farm) you go towards the SE on Malej meadow, 1232 m. From the upper right corner of the meadow the path deters towards the right through the woods and on scree fields, coming down from Škrbina notch. By the ravine you go mostly pathless up into the final couloir, which exits on the notch. In the distant past this was supposed to be even the passage, which was used to bring sheep herds on the southern side. Nowadays the path is completely deteriorated and abandoned. Very steep, crumbly, difficult hike up. This route is done best in times when the upper couloir is still filled with snow. From Škrbina notch on top you go as described above (#4).

No specific restrictions in the area. Kladivo is rising on the border, but within European Union all accesses are free. Still, having with you a personal identity document is allways a good idea.

1. Dom na Kofcah, 1488 m. Opened in summer, out of season also on weekends and holidays.

Kladivo can be climbed any time of season. Winter tours require either skis (usual tour skiing equipment), or a usual winter equipment. Only if icy, the upper slopes can be dangerous.