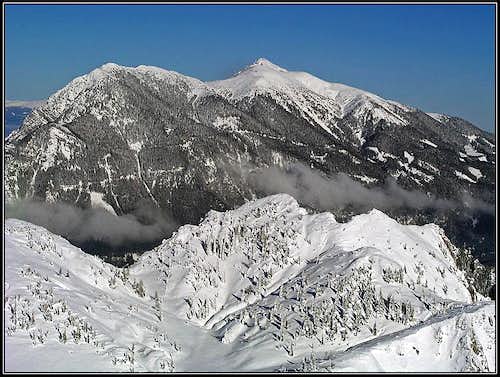 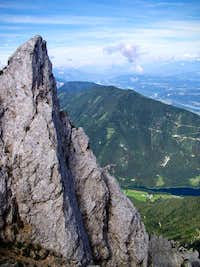 The broader massif is called Obir. The highest summit is called in German Hochobir, in Slovenian Ojstrc (because of its sharp cone) or also only Obir.

The fourth highest mountain of Karavanke / Karawanken range is a kingdom for itself. Standing on the very northern side of the range, just above the Drau / Drava river, it offers one of the greatest panoramas in the group. But also the diversity of the mountain is very interesting: nice hikes, various ski tours, mountain biking, cultural diversity of the landscape, a nice system of karst caves, a spa resort, remains of abandoned mines and more...

Towards the south Hochobir/Ojstrc shows a broad shoulder and only a small summit cone is more sharp. Towards the north, the view on the main summit is obscured by the broad fore-summit and only if you go a bit towards the east, a sharp, rocky mountain shows up. The most magnificient is the view from the west, where Hochobir/Ojstrc sends a broad rocky face, rugged and intermitted with many ravines.

The northen border of Obir massif is the river Drau / Drava. The eastern and western borders are two creeks, flowing into Drau / Drava river: Vellach / Bela on the east and Freibach / Borovnica on the west. On the southern side, the Obir massif is attached to the rest of Karawanks on the Schaida / Šajda saddle, 1068 m. From this saddle towards the east the Ebriachbach / Obirski potok (creek) flows. While the mountaineering highlight of the massif is actually only the highest point, the massif consists of a few more summits. North of the highest point the Kleinobir / Mali Obir (Small Obir) stands, 1948 m. This summit obscures the view on the main summit from north, from the Drau / Drava valley. In the SW ridge there's an elevation, called Kuhberg / Kravji vrh, 2024 m, while the two other ridges, the SE and the NE ridge, carry only lower and less important elevations.

In previous centuries on many places on Obir led was mined. That's why the mountain was very frequented and criss-crossed by many trails. Miners' huts were also offering shelter to early tourists. Even if made of limestone, Obir is the only summit in Karawanks, where even above 1800 m water sources can be found. Just below the summit one such source is even on 2000 m. There were miners' huts as well and also the highest lying metheorological station in the former Austro-Hungarian empire. It was operating till 1846 and was famous because the observations, carried by its staff, described for the first time temperature inversion in mountains. The house was also a shelter for hikers, called Rainer Schutzhaus. It was burnt by partisans in September 1944.

Wiews On The Massif From The Distance

North of the main summit a 200 meters lower shoulder rises, called Kleinobir / Mali Obir (=Small Obir). Its western and northern slopes are still steep and rugged, towards the South, a gentle summit plateau descends. Between the two summits there's a saddle, called Freibachsattel, some 1700 m, and on the western side of it the picturesque Jagoutz alpine meadow.

Kleinobir / Mali Obir is often ascended, as it is a great panoramic point and also the view on its taller brother is excellent.

A Bit Of Geology

The chain of Northern Karawanks, with Hochobir as the highest summit, belongs to the big geologic group of East Alpine mountains, the subgroup of the so-called Drauzug (Drau chain). The famous Periadriatic fault goes just south of it, by the Ebriach valley, thus separating Northern Karawanks from the Southern chain. The upper rocks of Hochobir are from triassic limestones, more precisely from the Wetterstein limestone (Ladinian, Carnian period). On the southern side, along the Ebriach valley and Eisenkappel basin, so on lower altitudes, narrow stripes of old crystalline and granite rocks are stretching towards the east.

The southern side of the mountain can be rached by a good local road either from Bad Eisenkappel / Železna Kapla (from the east) or from Ferlach / Borovlje (from the west). The valley below Obir is called Ebriach / Obirsko and consists of many picturesque settlements. High mountain farms are scatteres over broad, sunny slopes. From this valley the Obir panoramic road ascends up to the Eisenkappler Huette, 1553 m. It is opened from April till winter (depending on snow conditions).

That's in German, but as of classical maps, you can refer to: Karavanke, Central part and Grintovci, 1:50.000. Planinska zveza Slovenije. 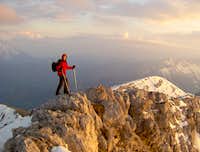 flow - on the summit ridge

Because Obir massif is rising in the northern chain of Karavanke/Karawanken, it offers an immense panorama. Perhaps the most interesting is the view towards the west, along Karavanke/Karawanken chain. Great is also the view on Kamnik and Savinja Alps, we see this group from the northern side. Towards the north we see Gurktal Alps and in a clear day also Niedere Tauern, Dachstein and towards the NW Hohe Tauern. Below us, there is a nice landscape of Kaernten with several lakes and river Drau/Drava. 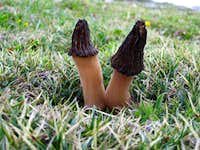 No restrictions. The Obir panoramic road must be paid during the season (€5,5).

This is a small, historical village, which, due to it's strategic position, played an important role in the middle ages and a bit later. It lies on a small plateau, which closes the exit of Vella / Bela creek valley, by which since prehistoric times an important trade route has been running. The gorge below the village was long unpassable, so all traders had to do the final steep climb into the fortified village. Above the village, since at least the 13th century also a castle was guarding the passage. Today, it can be hiked up, but it's all in ruins. Later, just above the village also a mansion and a commandery were erected, with a cute nearby church today forming a nice historical complex. Even higher, there's a panoramic hill, called Rochusberg (St. Rochus Peak), with a chapel and nice views around.

Hochobir/Ojstrc can be ascended any time of the year.

For weather see here and then choose on the menu: Kaernten.

The only alpine club mountain hut, supporting outdoor activities on Obir is the Eisenkappler Huette. It is opened also in winter if the weather is nice. Tel.: 0664 – 38 58 907, e-mail: orasche.hirtl@aon.at. Ask for Silvia & Marian Orasche.

Because of the Obir panoramic road, which reaches 1553 m, only to reach the summit camping is not needed.