In Slovenian language č, š and ž are pronounced like ch, sh, and zh. Our mountain is written Struška. 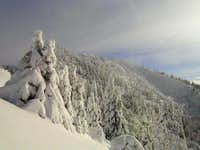 Early summer on the summit

For SummitPost purposes, it's best to describe small groups of Karawanks summits, rather than each distinct summit. This is also the case with Struška, a nice mountain shoulder, consisting of a few less important peaks.

In Struška region, the main crest of Karawanks is running in the NW-SE direction. The massif starts on Sedlo Suha / Maria-Ellend Sattel (saddle), 1439 m, where it is attached to Golica / Kahlkogel massif. The fist summit E of the saddle is Ptičji vrh / Kotschna, 1551 m. Austrian names here are a bit confused, namely, Kočna is the original name of the next broad saddle, cca 1500 m. This is a funny one. The southern, Slovenian side is a gentle, nice pasture, but when we step on the edge, suddenly a deep drop opens below us. The Austrian side is rocky and wild, very picturesque. SE of Kočna saddle the real Struška massif begins. The first summit in it is Korenščica, 1764 m, then a broad summit plateau continues to the highest point - Veliki vrh / Baerentaler Kotschna, 1944 m. Also further towards the SE this plateau continues; there's one more summit: Zijalke, 1875 m, after which the slopes of Struška massif lower on Medvedjak / Baerensattel, 1698 m, where the Stol / Hochstuhl subgroup already begins.

While the southern side of the mountain is opened, towards the north some more less important summits stand. The ridge from Struška's highest point, which goes towards the N, carries first the summit of Špičasti vrh / Grintoutz, 1653 m, still more towards the N stands the panoramic Mačenski vrh / Matschacher Gupf, 1691 m. On the southern side of the summit plateau there's a nice alpine meadow, called Belška planina, 1680 m, where a private hut stands (not open for public).

The summit part of Struška range is all made of late Triassic limestone (Dachstein limest), the formation, which stretches over the highest summits of Karawanks further eastwards. The lower parts of the southern and northern side are more or less made of younger debris, intermitted with older Triassic limestones. On the northern side these are building the summit rocks of Špičasti vrh / Grintoutz. Matschacher Gupf / Mačenski vrh is however a whole different story. The recent agreement of scholars says that the famous Periadriatic Lineament cuts the rocks on its southern slopes, that is why the 60 m thick patch of Wetterstein limestone on the summit reveals it belongs to the Nothern chain of Karawanks. But otherwise the picture of this mountain rocks is very distorted.

As the whole Karawanks range also Struška is ideal for hiking. Especially nice is traversing the whole massif. In winter and spring, there are excellent slopes for tour skiing. In recent years, since the road on Belška planina is made, the ski tour from Struška is becoming one of the most popular in Karawanks. If the road above Javorniški rovt is cleaned, the tour can be done in half a day. And, as the whole Karawanks range, also Struška offers a great panorama, especially towards the south, where the whole Julian Alps group can be seen.

There's one more special attraction of these hills. Mid May, when snow is already away, and grenery covers these hills, suddenly all these slopes turn into white again. It's daffodils blossom time. Although in the past, when these meadows were cut regularly, the density of daffodils was even bigger, also nowadays every visitor is surprised, seeing flower by flower, wherever you turn around. This is a big attraction of these hills and every mid May a feast is organised on Planina pod Golico.

Mačenski vrh / Matchacher Gupf from the main summit
Quite remote from the main summit of Struška, far towards the north above Drau / Drava valley, the summit of Matschacher Gupf / Mačenski vrh rises. It is actually the westernmost high summit of the northern chain of Karawanks, but as for now it will not get its own page, I'll describe it here. Steep and crumbly on the western side, and on the upper 200 meters also steep on the southern side, with a broad clearing on top it is a perfect panorama summit. Let the pictures below talk!
The summit is often ascended. From the famous Plavc farm we can do a nice round tour, the ascent will take us only less than 2 hours.

Plavc, 1143 m, is a nice old farm above Baerental / Rute. On its walls is written that it was erected in 1490, today it is renewed and equipped with solar energy system. It is reachable by car, or by a 30 minutes walk-up from Stouhuette.

1. Over Gipssattel / Mrzla raven. From Plavc farm we continue westwards by a good marked path. We pass a few meadows with nice views on Karawanks northern slopes, then we pass the water source and soon reach Gipssattel / Mrzla raven (saddle), 1466 m. Here also the forest road reaches (biking!). On the saddle we turn right and over the summit part (very steep) reach the top. 1 h 30 min.
2. By the east ridge. From Plavc farm we go by the road towards the nearby chapel of St. Mihael. Just above it, the marked path enters the forest, keeps first below the ridge, but then soon ascends it and continues by the panoramic east ridge on top. 1 h 30 min.

The two paths can be nicely combined in a round tour.

3. Through Mala Suha valley. From Sveče, in the main Drau/Drava valley we go by the marked path in Oberkrajach / Zgornje Kraje and further into the valley of Mala Suha. So we reach Gipssattel / Mrzla raven and as described in #1 above, in next 30 minutes on top. 3 h 30 min, marked.

4. The SW neighbour of Matschacher Gupf / Mačenski vrh is Bärentaler Grintoutz / Špičasti vrh, 1657 m. It's more difficult to reach. Either from Gipssattel / Mrzla raven, or more directly from Plavc farm, we must first reach the Plavc alpine meadow, south of the summit. Then northwards on the ridge and right in easy climbing on the summit.


As every high summit of Karawanks, also Struška offers a great panorama on all sides. Here are just some examples. 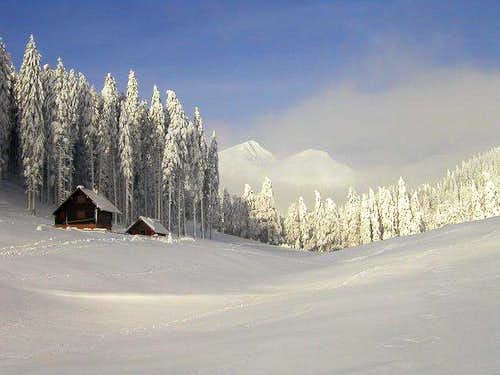 From the south, we start ascending Struška from the main Sava valley. From Jesenice town, two good roads ascend towards the north.

The western one goes to Planina pod Golico and further towards Savske jame and up towards Markljev rovt (pasture) and Pusti rovt (pasture). These forest roads are build further and further every year, but some end sections are closed for public traffic. You can now park on altitudes around 1200m.

The eastern road goes from Jesenice towards Javorniški rovt and further towards Struška. You can park around the mountain hut on the altitude of some 1000m or, if you drive on, higher, on some 1200m.

From the north the most suitable option is the ascent from Baerental. You enter this valley in Feistritz in Kaernten and can drive up to the mountain hut on the altitude of 960m. 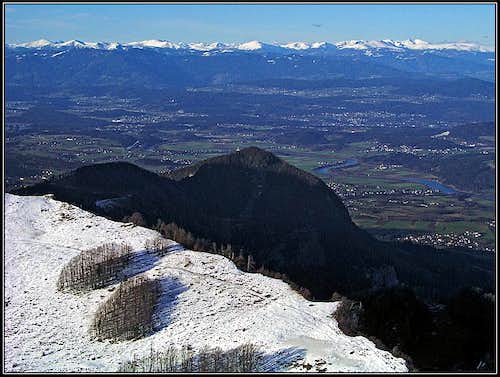 The direct variant by the W ridge is harder to find. The beginning is obvious. An ex frontiers path takes us up and when the ridge gets covered with dwarf pines in avoids a rocky bump by the right side. Above it goes by the main ridge all the time. Keep left as much as possible, just by the edge. Then you cross anice plateau. Above it, you will have to turn right. Following animal paths you get out of dwarf pines on the southern side and proceed there on top. Very nice hiking, especially when spring is on mountains. By this route you can also do a ski tour. Altogether an easy hike, some steep grassy slopes. From the road 3 h.

In recent years, from Pusti rovt a new mountain road was build on Belska planina. This means of course a serious deterioration of nature. More and more people are coming on Struška, in summer and in winter. The road shortens the approach, because we don't need to go on Kočna saddle any more. Because of this road recently Struška became one of the most popular summits for tour skiing. In normal conditions, the tour can be done in half a day.

3. From the E, from Baerental. From the parking place near the Stouhuette (hut) we follow the marked path towards the SW. Over some nice meadows and through some steeper forest sections we reach Medvedjak saddle. There we turn right and in the NW direction ascend the summit. 3 h.

5. Through Mala Suha valley. We first go some 45 min by the marked route towards Gipssattel / Mrzla raven, then continue right towards the south. In the upper part the tiny path goes towards the right and reaches the main ridge far on the west, above Kočna saddle. Then by the main ridge on top. 3 h 30 min from the main valley, not marked, difficulkt orientation!

1. Through Medji dol (like #1 of the above summer tours). The finest terrains are in the upper part.

2. Western slopes (like #2 of the above summer tours). The passage below Korenscica is narrow, but in good conditions (a lot of snow) possible. The upper plateau is quite flat for skiing. Today, as said almost everybody is skiing from Belska planina down by the new road, or, cutting the part just above Pusti rovt by a flat valley, cleared of trees.

3. Ski tours towards the north and east are not described, but should be possible in good conditions (if enough snow). 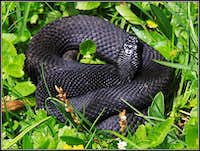 No limitations. For Karavanke tunnel you must pay toll.

Struška can be ascended any time of the year.