Klomnock is one of the most popular summits in Nockberge. In summer, its popularity is mostly due to the fact, that the panoramic Nockalmstrasse (road) reaches one of its two highest points on Schiestelscharte, 2027 m. From there hikers have less than 1 hour to the summit. And, because the ascent is not hard, there are many of them. In winter its popularity goes more to the sunny cauldron of St. Oswald, lying south of the summit. This resort is part of Bad Kleinkirchheim ski arena and is touristically well developed. An attractive ski tour goes over the neighbouring Mallnock, 2226 m, by the ridge to the summit and then down in southern direction.

Geographically Klomnock summit is sending one shorter ridge towards the North, to Schiestelscharte, one long ridge towards the southwest, to Mallnock, 2226 m and further to the long ridge of Brunnachhoehe, and the third long ridge, called Steinhoehe, towards the southeast, where on Steinnock, 2197 m, already the Falkert area begins. As said, south of Klomnock the valley of St. Oswald lies, on the northwest there's the upper part of Grundtal with Grundalm and on the northeast there's the upper part of Winkelbach valley with Mayerlingalm. A pretty clear picture!

As most of the highest summits of Nockberge are of a quite same altitude, being scattered around the broad area, also Klomnock offers a nice view in all directions. On the West we see the broad Rosennock and all around in close neighbourhood other Nock summits. In the distance some main ranges of Alps can be clearly seen: Schladminger Tauern on the North, Hohe Tauern on the West and Julian Alps and Karavanke/Karawanken on the South.

For the broader overview see the Gurktal Alps / Nockberge page!

From the south you best reach the well known tourist resort Bad Kleinkirchheim either from Klagenfurt via Feldkirchen or from Villach or Spittal via Radenthein. In Bad Kleinkirchheim you turn north into the valley of St. Oswald (8 km). On the upper part of the village you can in winter use the cable-car on Brunnachhoehe. For 550m of altitude a one-way ticket is EUR 7.90 (in winter 2006).

The other option is the Nockalmstrasse. There you pay EUR 13 toll for a car or EUR 7 toll for a motor bike. It is opened from begin of May till end of October. 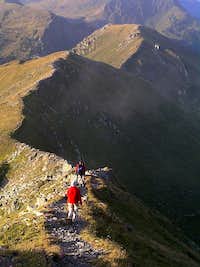 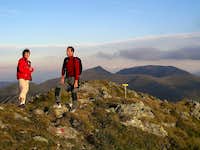 From the north, from Schiestelscharte, 2027 m

You start on the end parking place of Falkert road, at Hotel Schneekoenig, cca 1850 m. From there you ascend the main ridge and proceed towards NW by Klomnock's SE ridge to the top. Some 2 h.

You can reach the summit of Mallnock either from the upper station of Brunnachhoehe cable-car, 1902 m (1 h) or from the south, from Falkertschutzhaus, 1557 m (2 h). Then by Klomnock's SW ridge to the top (another 20 min).

In summer also other passages are possible, only the NW slope is rocky and you should avoid forcing a passage over it.

You start on the ridge of Brunnachhoehe, 1902 m, (or in St. Oswald, 1356 m), by the upper station of the cable-car. From there you continue towards NE and ascend Mallnock, 2226 m. Then continue in the same direction and ascend by Klomnock's SW ridge the highest point. Some 1 h 30 min.

You can ski down either from the summit of Klomnock towards the south to Falkertschutzhaus, 1557 m, or if not going on the summit of Klomnock, from Mallnock by its SE slopes into the valley of Schoenfeld and further to Falkertschutzhaus. Both downhills are very beautiful, on the top there are some steep sections. Take care when there's an avalanche danger! From the hut proceed towards SW down to St. Oswald, 1300 m.

The Nockalmstrasse is opened from May to October (toll!).

To ascend Klomnock you don't need to sleep on the mountain.

You can climb Klomnock in any season.