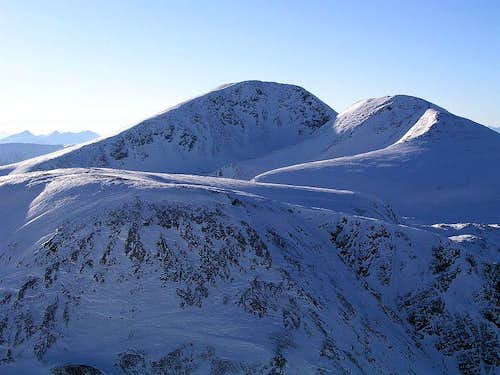 Rosennock is the highest mountain in Nockberge, but also a typical representative of this region - broad, rounded, in summer easy to ascend from many sides, in winter offering nice and easy ski tours. NE of the main summit there stands Kleiner Rosennock, 2361m, a rocky smaller brother of Rosennock. In rounded ridges, descending from the summit towards the South there are some more elevations, but their importance is low. We can cross them, choosing a hiking route over these ridges. Also the broader ring of mountains on the north can not be sonsidered to belong to Rosennock any more. There are some summits, which can be goals of a hike themselves.

The majority of visitors, be it in summer or in winter, ascend Rosennock from the southern side, which is touristically most developed. Through the Langalmtal in summer goes a forrest road, by which many private huts are supplied. From there also all marked paths go. The other option is longer. Starting from the south around the western side the valley of Koflachbach encircles the summit. There starts the western summer approach. The northern side of Rosennock is much less touristically developed, even if also from that side approaches are possible, the most obvious one is from the Nockalmstrasse (panoramic road) through the valley of Hofalmbach.

Rosennock is a mountain with a broad and nice panorama. All around us we see the hilly landscape of Nockberge. No sharp contours can be seen on near mountains, all attractive sharp peaks are quite distant - in Schladminger Tauern on the North, Hohe Tauern on the West and Julian Alps on the South.

For the broader overview see the Gurktal Alps / Nockberge page!

From the south you best reach the well known tourist resort Bad Kleinkirchheim either from Klagenfurt via Feldkirchen or from Villach or Spittal via Radenthein. In Bad Kleinkirchheim you turn north into the valley of St. Oswald (8 km). On the upper part of the village you can in winter use the cable-car on Brunnachhoehe. For 550m of altitude a one-way ticket is EUR 7.90 (in winter 2006). The other, more obvious option is through Langalmtal. We enter this valley above Radenthein, the town lying west of Bad Kleinkirchheim. In Radentheim we drive northwards to Kaning, 1023m, and, if the road is passable, from there into the valley. In summer you can usually drive to Langalm, 1458m.

The third option is the Nockalmstrasse. There you pay EUR 13 toll for a car or EUR 7 toll for a motor bike. It is opened from begin of May till end of October. 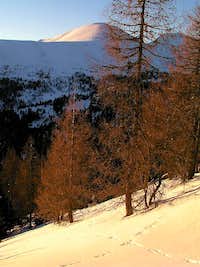 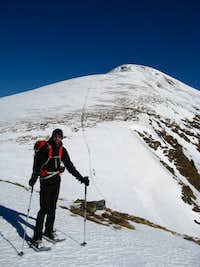 1. From the south. In Kaning, 1023m, two long routes begin, one going over the shoulder of Gridleck, 1887m, the other one over the Neuwirthuette, 1568m. They both join on the ridge of Feldhoehe.

2. From the south-east. You start in Langalmtal and go up the valley. On Langalm or before it you can deter left and reach Feldhuette, 1758m. From there you go to the summit either directly, or via Nassbodensee. Feldhuette can be reached also by a cart-road from Erlacher Huette, 1636m, the latter can be reached either through the Langalmtal or by descending from Brunnachhoehe (cable-car station).

3. We go from Kaning by the valley of Koflachbach or above it, till we reach the western slopes of Rosennock. There the marked path deters right (towards the E), first ascending steeply by a cart-road, then using the SW ridge of the main summit.

4. From the north we start on Nockalmstrasse by Sackl Huette, 1519m, and go into the valley of Hofalmbach. On Hofalm we turn westwards and by the creek continue to Kaninger Wolitzen Huette, 2070m. From there we continue to Nassbodensee and towards the West to the highest point. The first part of this route is not marked.

5. From the East good marked paths are crossing this part of Nockberge. They offer approaches to the summit, which can be done in more than one day.

Ski tour from the south-east

1. You start either on the ridge of Brunnachhoehe, 1902m, (or in St. Oswald, 1356m), by the upper station of the cable-car, or in Langalmtal. First you must reach Erlacher Huette, 1636m. From there you continue by a cart-road below Zunderwand towards the West and reach Feldhuette, 1758m. From there directly towards the West and North-west to the summit. You'll need from the cable-car station some 3h.

2. From Langalmtal directly. You go by the valley till Veidlhuette, 1425m (just before Langalm, 1458m). There the marked path (and often a ski trail) turns left and ascends in the northern direction directly to Feldhuette, 1758m. From there directly towards the West and North-west to the summit. 3h.

The Nockalmstrasse is opened from May to October (toll!). 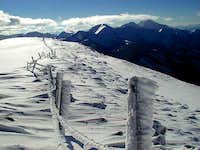 You can climb Rosennock in any season.