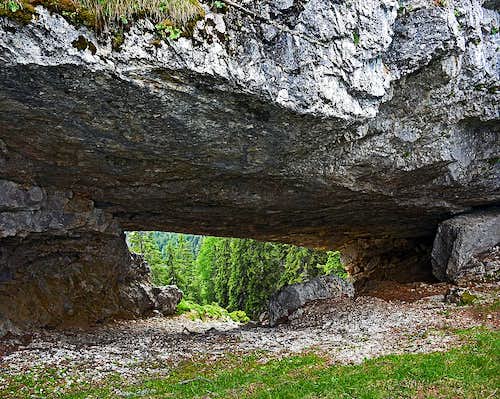 On the east ridge

In the eastern part the Gailtal Alps / Ziljske Alpe have only one indisputable ruler. The big massif of Dobratsch is attracting all attention. In the whole area there are some more elevations, also marked routes are reaching them, but all except Kobesnock are forrested till their summits. So, Kobesnock is the only remaining summit which can be recommended as a nice hiking goal. It is the highest elevation in the long Bad Bleiberg ridge, its rocky and grassy summit offers a wonderful panorama and the round tour is nice, even if a bit demanding.

In the eastern ridge of Kobesnock, very close to the summit, there's a big and nice rock window, called Kaltes Loch. The eastern ascent route passes by it.

The summit ridge of Kobesnock (and further to the east) is made of middle Triassic Wetterstein limestone, some 240 million years old - see the picture of rock window. In lower regions north and south of the main ridge, there's younger, upper Triassic main dolomite and slate. A simple picture, at least in the narrow area.

The valley north of Dobratsch was through many centuries known as a prosperous mining area of led and zync (hence the name 'Bleiberg' - 'led mountain'). On the slopes of Kobesnock mountain ridge you can still today see many mining shaft entries, but the whole operation has been closed since the end of the 20th century. Since mid 20th century warm water has been exploited, so the town is today known as a spa (hence the name 'Bad' - 'bath'). The abandoned mine is nowadays arranged for tourist visit - marketed under the name of 'Terra Mystica'. Finally, in a big quarry in the valley a special 'Bleiberger Muschelmarmor' (actually a dark shell limestone) is still excavated.

North of the Bad Bleiberg valley a long mountain ridge is rising from the east towards the west. As it also hosts a marked path, let's name its elevations: Spitzeck, 1332 m, Mittagskofel, 1426 m, Point 1420 m, Schwandnock, 1517 m, Lahnernock, 1514 m, Hachelnock, 1442 m, Mittagsnock, 1558 m, Sattlernock, 1583 m, Zebernock, 1555 m, and finally Kobesnock, 1820 m. On its highest point the ridge branches, so several forrested ridges are lowering towards the N, NW and SW. Just below Kobesnock, on the SW side, there is an alpine meadow, called Wertschacher Alm (in Slovenian: Dvorška planina), 1565 m. A mountain road (closed for public traffic) reaches there from the road pass of Windische Hoehe / Venetski hrib. The northern slopes of Kobesnock ridge are a forrest reserve - quite remote area, falling into the Koflachgraben, criss-crossed by forrest roads, very likely closed for public traffic.

The view towards the west

Well, regarding panorama Kobesnock can't be compared by Dobratsch, but in its panorama not very much is missing. The rugged Julian Alps are there, a part of Karawanks is obscured by the cone of Dobratsch (which looks quite handsome), but left of it the Karawanks continue. On all other sides the views are the same, only the viewpoint on Kobesnock is 346 m lower. Carnic Alps (main ridge), Gailtal Alps, Nockberge and more towards the west Hohe Tauern are nicely seen.

The view towards the east and south

The most important trailheads are the following:

From the points on the NW, N and NE side I guess almost nobody ascends Kobesnock (except local experts). 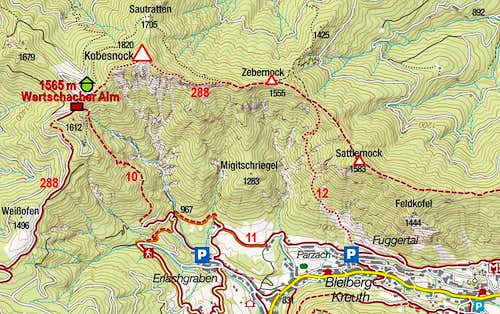 Three marked routes are reaching the summit of Kobesnock. Routes #2 and #3 can be combined into a nice round tour (up by route #3, down by #2).

The easiest ascent, but not the most beautiful one. Just on the road pass the path No. 288 starts. In the E direction it goes partly by mountain roads, partly by shortcuts. When the road reaches the S-SW ridge, it turns left and in the N-NE direction we follow it to the Wertschacher Alm. Then in the same direction by more and more steep path through the woods, until we reach the summit ridge. There are some rock sections, but those passages are short and easy. 2 h 45 min, difficulty: T2 (by the Swiss Hiking Scale).

From Bleiberg Kreuth we drive up towards the NW into the Erlachgraben, where we park (some 900 m). Marks are following first the road, by which we first reach the crossroads of marked paths on 967 m. By the road we continue left, until the marks of path No. 10 leave it. Now a moderately steep ascent begins. It goes all the time through the woods, crossing the slopes of the wild Schneider Graben towards the right up. One place (crossing above an eroded ravine) is a bit exposed, so it is secured by a fixed rope. The rest of the ascent is easy. The path No. 10 exits by the hut on the saddle of Wertschacher Alm. From there as in #1 in 40 minutes on top. 2 h 45 min, difficulty: T2 (by the Swiss Hiking Scale). 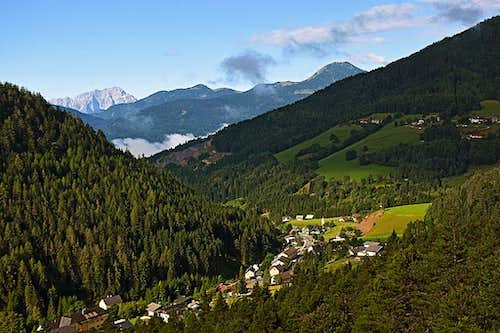 From the upper houses in the village we follow the marks by a mountain road, but soon the marked path leaves the road and starts ascending steeply towards the NW. We are mostly crossing the slopes (of Sattlernock), passing the remains of mining and a nice water source. Then the path continues comfortably, but moderately steep through the woods. In the middle of the slope it crosses an eroded ravine - the passage is partly secured by a fixed rope, but also requires a safe step (T3). Then some time the path is easy again, but on a side ridge it turns a bit right and starts ascending directly upwards. It is steep and the path is narrow - again a safe steep is required. Then we need to do the last crossing. Again carefully, the path is narrow, we go below a rocky barrier and then across the last slope on the main ridge. That's Zaber, 1480 m. From the right the red-marked path No. 288 comes along the main ridge.

Now we turn left and follow the main ridge. At first the path is easy, it becomes also quite panoramic. The more we are approaching the highest point, the more difficult passages occur. The path goes over the rocks, on some sections it is secured by a cable, on other it is not and requires a safe step (T3). It is not very exposed, but enough that a mistake would be very painful. So, we carefully proceed over the last rocky bumps, pass by the rock window and gain the summit. 3 h, difficulty: T3 (by the Swiss Hiking Scale).

As all hiking combinations are half-day tours, mountain huts are not needed. On the Wertschacher Alm there is a private hut, where you can eventually get food and drink in summer season.