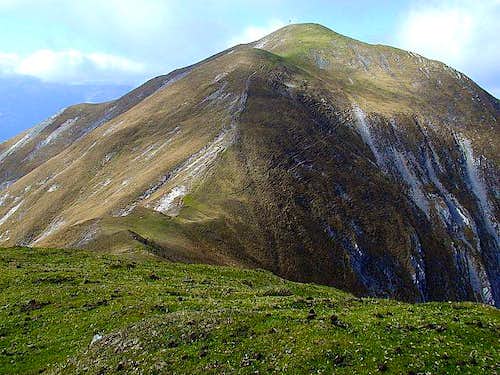 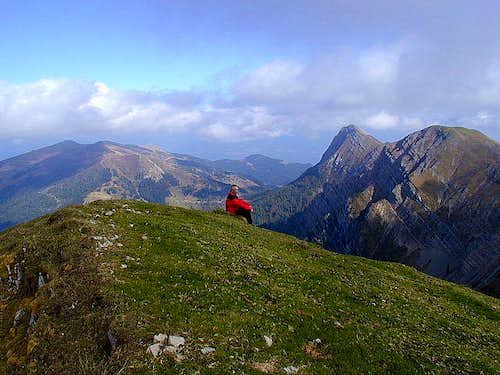 The views towards Staff

While some peaks of Gailtal Alps outside Lienz Dolomites can also be rocky and sharp, Latschur, although being the highest in its small subgroup, is a massive, rounded, grassy mountain (except a part of its N face). It's hard to say that it's not attractive for mountaineering, especially in winter skiing down those broad slopes must be very nice and hard too, but it really doesn't offer other than a walk-up and, on the summit, a broad panorama. Still, the broader surrounding is nice. A special pearl is Weissensee (White Lake), 930 m, on the southern end of Latschur subgroup, a big, crystal clear and warm enough lake, which is turistically exploited, but never really crowded. There's no road around the lake, only paths and broad pine forrests. High above the lake, on all the slopes of the mountain there are broad alpine meadows. And these summits, meadows and panoramic points are connected with a dense network of marked paths. The map below shows only some of them.

The Latschur subgroup consists of some more or less distinguished peaks, three of them being candidates for real autonomous mountain hikes. Latschur, 2236 m is the highest. East of it, the beautiful Staff, 2217 m, stands. The ridge between both is the backbone of this small subgroup, carrying summits: Almspitz, 2180 m, Eckwand, 2221 m and Kopasnock, 2087 m. North-east of Staff, Goldeck, 2142 m, stands relatively independently. From the summit of Latschur one ridge is going towards the north, lowering significantly after the bump of Kreuzbuehl, 2060 m, and the other ridge is going towards the west, lowering significantly after the bump of Huehnerspitz, 2002 m. One strong ridge is also deterring towards the south from Almspitz, first forming the broad saddle of Stosia, 1800 m, and there starting to turn slowly in a long arc towards the western direction, carrying some summits, which are already sunken in deep forrests, however.

Besides hiking in summer and tour skiing in winter season the Latschur subgrup is popular also by the Goldeck ski resort. The cableway from Spittal in the Drau valley brings on this rounded mountain big crowds almost each nice weekend. 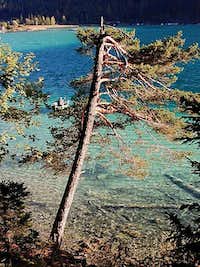 On the N shore

The lake can be reached by motor roads, but only its western end and eastern end separetely. Fortunately no public road connects both ends of the lake, thus ensuring peace on shores. The western shore is turistically more developed than the eastern one. On both you can rent a boat to exercise some rowing along the lake shores.

As any ascent can be done in one day, there's no real need for sleeping on the mountain (except if hiking all around the place).

On the eastern shore of Weissensee there's a nice camping place. There are also camping places in the Drau valley.