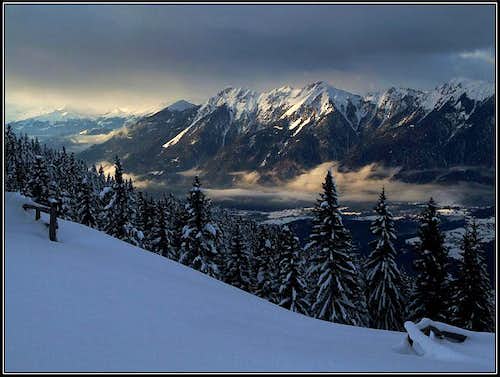 Spitzegel group from the SE

The summit from the E

They say (but the explanation looks very unlikely to me, because local people are giving names to mountains) that many mountain names in Gailtaler Alpen which end on "Egel" have their name by the french word "aiguille", which means "needle, sharp peak". Well, Spitzegel at least from one side, from the west, looks like a nice, sharp peak, justifying such an ethymology. The Slovenian name is Negal.

While many summits of Gailtaler Alpen - the chain north of the river Gail/Zilja - are quite low and unattractive forrested hills, every now and then a high, dominating group arises. First the massive Dobratsch on the east, then the sharp ridge of Spitzegel, then Reisskofel and Jauken.

Spitzegel shows its probably most attractive side towards the south. Most of that slope is grassy, yes, but intermitted with picturesque towers and slabs and also generally quite steep. The whole slope is rising more than 1500 m above Obervellach, the village just below Spitzegel. The northern slopes are more rocky and rugged, but the rocky section is lower, then the slopes soon get densely overgrown by pine bushes and woods. Wild ravines are falling down to the valley of Tscherniheimer Bach valley which has there an altitude of approximately 1100 m.

The summit of Spitzegel is quite often visited, but there you will rarely meet a real crowd. Partially because the ascents are quite long and strenuous, partially also because they are not just easy and appropriate for everyone. The reward on top is a great and diverse panorama and of course also a bit of a sense of accomplishment. On the western side of the mountain the high alpine pastures can be reached by mountain roads, closed for public traffic, but allowed for bikers. A round tour on Obervellacher Alm is one of the most rewarding mountain bikes in the region. As the very summit is sharp and rocky, it is not really appropriate for tour skiing. Skiing can be done from the ridge, but it goes towards the south and is very steep, requiring best conditions and excellent knowledge of skiing.

The broader area of Spitzegel is very diverse. On the southern side it is touristically very developed - there is the broad and sunny valley of Gail / Zilja, with the nearby touristic centre of Presseger See / Preseško jezero (lake). The northern side is remote and lonesome. A narrow valley with a few hamlets, the road through it is closed for public traffic. And towards the east and west of the group there are lower, mostly forrested mountains where almost exclusively only locals go.

A Little Bit Of Geography 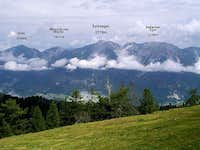 Spitzegel group from the S

So, Spitzegel is in fact a prolongued, sharp ridge, with the highest point on the very west. Close to the summit of Spitzegel, there is just a little lower Eastern foresummit (no altitude given), then beyond the notch 1971 m comes Kriebhoehe, 2065 m, then a grassy saddle of around 2000 m and finally a sharp Vellacher Egel, 2108 m, the second highest peak in the group. With Vellacher Sattel, 1858 m, the narrow group ends on the east.

Mountains more towards the east belong already to the small group of Graslitzen, 2044 m. On the southern side, just above the main valley of Gail / Zilja, there are two forrested terraces on the slopes of Spitzegel group. The western one is called Hohe Wand and is indeed a rocky crag over which even a ferrata goes. Just SE of it on a rocky outcrop there are ruins of Khuenburg castle. The eastern terrace is less distinguished, but also shows towards the south a few crags. North-west of Spitzegel there is just below the main ridge a broad alpine meadow called Obervellacher Alm, 1701 m. More towards the NW there is another, lower alpine meadow called Radniger Alm, 1554 m. The two alpine pastures are separated by a forrested hill, called Moeschacher Wipfel, 1911 m. From the south, mountain roads reach both meadows and they are also connected by a road - that enables a nice mountain bike round tour.

It was discovered that in the times before the last glaciation period (Wurm era, more than 20.000 years ago), from just below the summit of Spitzegel a huge landslide went down southwards. It was estimated that some 5 millions of cubic meters of rocks slided down and across the Vella creek, where it was stopped by the up to 700 m high ridge in the middle of Gail valley. Later these landslide masses were much taken away by glaciers and erosion, but the remains can still be found there, and the shape of Spitzegel still shows a big wound.

The valley of Tscherniheim Bach is famous of the oldest (and last) glass making house in Kaernten. From 1621 to 1879 in the settlement, where in the best times up to 200 people lived, the famous Tscherniheim glass was produced. Products were sold worldwide. Today some of them are exhibited in Spittal's Bezirksheimatmuseum. In the valley itself you can still see a small chapel of the settlement and along the mountain road plates teach you about the glass making tradition in the valley. Reading: Helmut Prasch: Waldglas aus Oberkaernten 1621-1879 - Glashuette Tscherniheim, 1971 (Auszuege).

The most beautiful part of Spitzegel's panorama is the view along Gail/Zilja valley. Long and flat valley is stretching in both directions as far as to almost the horizon, above the valley the mountains of Carnic Alps Main Ridge are rising. The rocky mountain group around Nassfeld/Mokrine/Passo di Pramollo is still clearly seen. Along the crest of Gailtal Alps / Ziljske Alpe a few remarkable summits are more in the distance - Dobrač on one side, Reisskofel on the other side. Towards the north a more distinctive is only the Latschur group, other summits are lower and mostly forrested. From behind them, some glaciated summits of Hohe Tauern can be seen, the most beautiful is Hochalmspitze. Worth to mention is also the view down on two nice lakes - on Presseger See / Preseško jezero on the south and on the much bigger Weissen See / Belo jezero on the north-west, already in some distance.

1. From Obervellach, 600 m (or from Khuenburg). The path starts in the village and soon ascends on Hohe Wand, where on the plateau it hits the mountain road, coming up from Khuenburg. Then the path (No. 248) goes some time by the road, then does a few shortcuts in the N direction, finally reaching Obervellacher Alm (Laudinzenhuette, 1682 m). There you turn sharp right on the main ridge and continue by it on top. Easy path till the summit section, where through a rocky ravine and over the summit ridge some easy climbing is needed. 4 h 30 min for good 1500 m of altitude.

2. From Radnig, 722 m. This alternative goes even more towards the west than the route #1. By the mountain road you reach Radniger Alm, 1554 m, from there cross the N slopes of Moeschacher Wipfel, reaching Obervellacher Alm and from there go on top as described above. 5 hours.

4. From Khuenburg, 600 m (or from Pressegen). Above Khuenburg the mountain road branches. The right, eastern road goes up on Untervellacher Stand, 1363 m, from where the path No. 249 ascends on the main ridge. It reaches it on Vellacher Sattel, 1858 m. From there, it's still a long way to Spitzegel. First, the marked path crosses Vellacher Egel, then it detours by the southern slopes Kriebhoehe then it finally reaches the fore-summit and the main summit. From Vellacher Sattel on the path is exposed and demanding.

On the eastern approach - crossing the steep slopes below Kriebhoehe

5. Southern slopes ski tour. Basically, Spitzegel is not a typical mountain for tour skiing. But in winters, very rich with snow and when still there is not a big danger of avalanches, the ski tour can be done. It goes over the very steep southern slopes. By the mountain road we go from Khuenburg till the altitude of some 1060 m. There, we deter from the road and start ascending directly up, in the N direction. On the altitude of some 1700 m we reach rocks, there we turn right and go towards the E and steeply up on the main ridge. Depending on snow conditions we climb left on top, using crampons. Skiing is done from the ridge. Very steep, hard ski tour.

Ascending Spitzegel from the E

6. From Fischer Alm, 1081 m. From the parking place, at the entry into the valley, 996 m, till this meadow with the mountain hut we have some 15 minutes of walk by the mountain road. Before the hut the inscription orients us left, directly up the slope. A good path goes steeply towards the S and finally reaches the main ridge between Vellacher Egel and Kriebhoehe. Then we go below the latter towards the west on the fore-summit and on top. The ridge part crosses very steep grassy slopes and is on e few places exposed, requiring easy climbing. 3 h 30 min from the parking place. 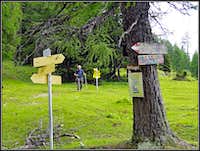 7. From Bodenalm, 1231 m. From the parking place, at the entry into the valley, 996 m, till this meadow with the mountain hut we have some 40 minutes of walk by the mountain road. Before the hut another mountain road deters left up the hill. Marked path No. 246 follows it and above cuts a few turns of the road. Good 150 m below the saddle (Radniger Alm) the road turns into a steep and rugged cart-road and soon into a broad path. On some places it is not appropriate even for a mountain bike, even though we may attempt also a bike tour. From Radniger Alm we go eastwards on top, as described above under #2. 4 h from the parking place.

No special restrictions in the area. All mountain roads are closed for public traffic already down in the valleys.

In the touristically developed area around Presseger See, there are many hotels and also a camping place.

Spitzegel can be best climbed on dry seasons, so from approximately June till October. In winter and spring the tour requires a complete winter equipment. Ski tour can be only exceptionally done (enough snow, avalanche safe conditions).