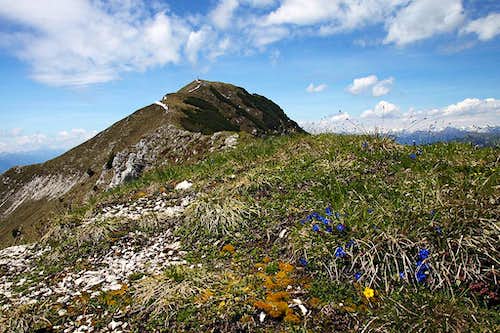 Main summit from the east

The group of Spitzegel, 2119 m, appears as one entity, composed of a long, quite sharp ridge, which loses much of its sharpness on the eastern and westwen end. Graslitzen is still close to the centre of this group, from the narrow Spitzegel group it is divided by a 1858 m high saddle and is so quite a handsome mountain. But due to considerable ridge distances it makes at the same time an impression of an independent, smaller mountain group.

The southern slopes of Graslitzen are very similar to those of the other high mountains. Arround the summits there are a few picturesque slabs and rock towers, there is a lot of steep, grassy slopes and below are nice, still steep forrests. Actually, on several places the joyful geology prepared some interesting surprises just on the southern slopes: there are some precipituous walls, rock towers and wild ravines.

The northern slopes are not any more so precipituous as those of Spitzegel. They are overgrown with dwarf pines and nice larches, and they are descending, still quite steeplly, on a broad, forrested area, where there are still some nice, big alpine meadows. Mountain roads reach there, but the majority of them is probably closed for public traffic. Also the main ridge of Graslitzen is not any more so difficult to pass as the ridge of Spitzegel, but the crossing still requires that on some places we touch the rocks with hands.

Besides the locals Spitzegel is mostly climbed by hikers. They are rewarded with a broad panorama, but this is a characteristic of all Gailtal Alps. In good conditions the summits must be appropriate also for skiing. But as ski tours go better towards the notrh, in times of tour skiing the approaches are long and enduring. For rock climbing some smaller crags would be appropriate. And finally you can also find enthusiasts, who choose this mountain group for mountain biking. How they were able to ride on those steep, rocky slopes, remains a mistery to me!

On the mountains north of the lower and middle valley of Gail / Zilja, once Slovenian people were prevailing. That's why it is still possible to find old toponymes. In the continuation I will try to write them at first mentioning, later I will stick to German names, which are today in common use. The Slovenian name for Graslitzen is Glazice. In many Austrian guidebooks it is mentioned that the word Graslitzen originates in Slovenian language and that it means grassy and rocky mountains. This reasoning is quite unclear to me, as the root of the word 'grass' means grass only in German language, but not in Slovenian (where 'grass' is 'trava').

A bit of geography

Despite the quite simple structure of our mountain it is worth mentioning a nice, panoramic terrace on one of its south ridges. There for centuries a cute church of St. Steben / sv. Štefan stands. In the local documents it was first mentioned in the year of 1466. It is devoted to Sv. Steben, who was a pope in Rome between 254 to 257. But the place must had been known also much before - supposedly even to the old Celtic people who valued it for a good lookout point. Shrouded in legends, the church is today the goal of many hikers. It is approachable by a mountain path and by a tourist path from the Siebenbrünn (Seven Sources) biotop.

The summits of Gailtal Alps are standing in appropriate distances each of others that they all offer nice panoramas. From Graslitzen you have the most beautiful view along the GaItal valley, while deep below us the Presseger See beautifully shines and on the other side of the valley the long ridge of Carnic Alps stretches. Behind them and much further towards the east you see Julian Alps and Karavanke chain. The highest neighbouring mountain on the east is Dobratsch. On the north the group of Latschur is very close to us, from behind it some high summits of Hohe Tauern are peeking. More of them, including the sharp ridge of Grossglockner, can be seen further to the west. And the neighbouring summits towards the west are the ones of Spitzegel group.

The ascents on the main summit of Graslitzen are possible from all sides. Really nice and popular are mainly the two south approaches. In continuation I'm listing only some most important trailheads and some characteristics of the tours from them.

1. Förolach, 619 m. The village lies just by the main Gailtal road, east of Pressegen See. In the middle of the village the roads join by a nice fountain, from there a narrow asphalt road continues towards the north. For public traffic it is closed by a big barn, where we can park. Both southern tours start there.

2. Windische Höhe, 1110 m. From the road pass towards the west the Gailtal long-distance hike route goes. But to the summit of Graslitzen there's still quite some distance. Consider overcoming the first part with mountain bikes!

3. The road closure before St. Stefaner Alm. On this mountain road we deter from the road which connects Windische Höhe and Weissen See / Belo jezero at Plachhäuser, then we drive by the valley towards the southwest (on Patternioner Alm) and then further towards the west. The road is closed some 2 km before St. Stefaner Alm. That's the closest trailhead to the summit of Graslitzen. 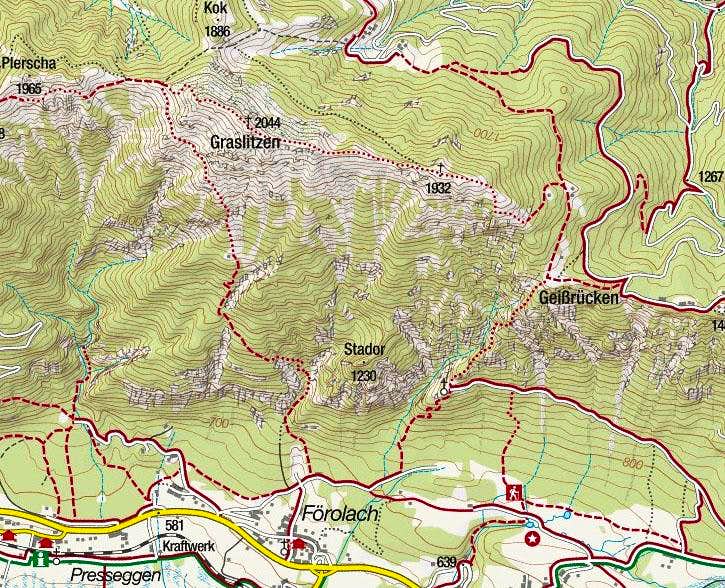 East ridge from the main summit

1. Graslitzen from Förolach, W route. Quite high, but diverse, medium difficult hiking tour. It passes by the hunters hut and then crosses the W slopes till the main ridge. From there, it goes on top. Difficulty: T3, 4 hours.

2. Graslitzen from Förolach, E route. Also this is a medium hard, quite long hiking tour. The ascent from St. Steben church up on alpine meadows is very steep, quite demanding, despite woods there are several picturesque places. Then from nice meadows we quickly gain the eastern ridge and foresummit, finally the quite long summit ridge awaits us. Orientation is easy, tour difficulty is T3, some 4 h to the top. This tour can be nicely combined with #1.

3. Graslitzen from Windische Höhe road pass. From the pass the marked path No. 250 goes towards the west, some time by mountain roads, some time by shortcuts. In two hours we reach the cross (Geißrückenkreuz) below Köstendorfer Alm, and then continue on top as described in route #2. This approach is easier than from Förolach, but it may be a few minutes longer.

4. Graslitzen from St. Stefaner Alm. From the parking place we have till the alpine meadow some 30 min. The path further is also not marked. It is best to continue towards the west, and then by a shepherds path towards the southwest, on Förolacher Sattel. There we turn left and go on top as described in route #1. Altogether should be some 2 h of walk, the approach is easy.

Around Graslitzen there are no official huts of mountaineering association. But in private huts on the meadows east and north of the summit we shall certainly be served, as some of them are advertised on the web as tourist facilities.

On Graslitzen we can ascend in any time of a season. In winter conditions the summit ridge requires proper equipment and we also can not seriously count on the approaches from Förolach. You must come on skis or snowshoes from Windische Höhe or fromPlachhäuser. 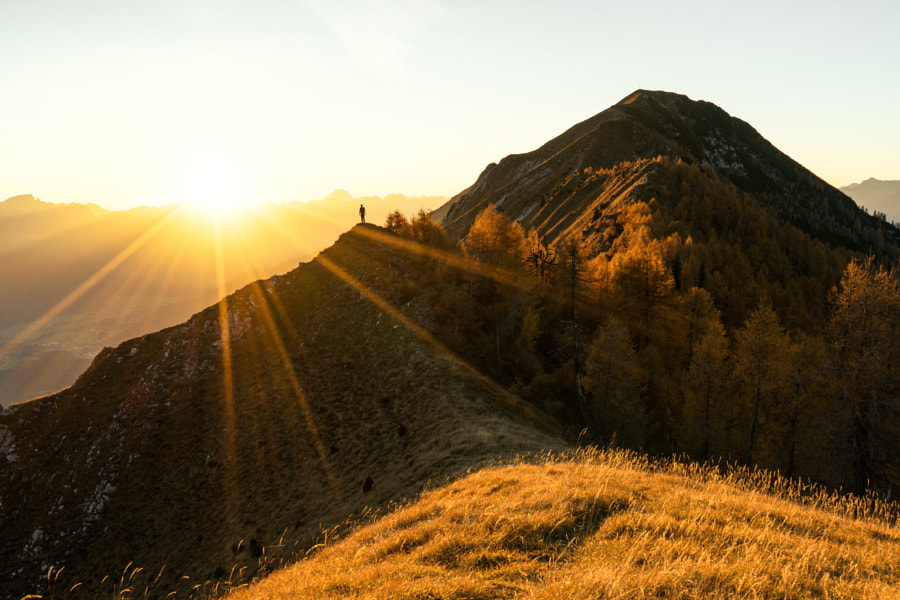