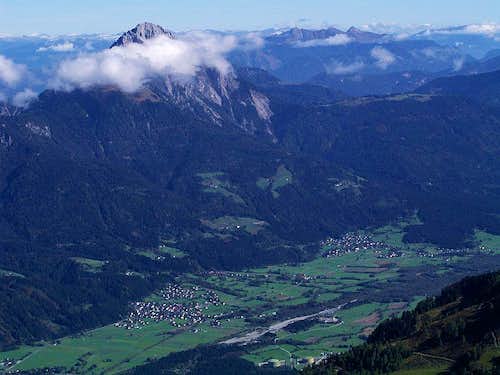 Reisskofel is the most beautiful mountain in Gailtal Alps, Southern Limestone Alps, and is well worth visiting. The western part of Hailtal Alps is a fascinating subgroup of Lienzer Dolomites. More towards the east, a single mountain crest is formed, where Reisskofel is the most outstanding summit. And again towards the east more lower summits are arranged in some parallel crests, finally finishing above Villach town with the broad Dobratsch.

Reisskofel is unique because of its position. Surrounded by much lower mountains on the east and west, being built of steep rocky walls, it's a distinctive figure, despite it's relatively low altitude. But also the altitude itself is considerable - the mountain still rises more than 1700 meters above the Gail (we, Slovene people call it Zilja) river and the same 1700 meters above the Drau (Drava) river.

The mountain itself is actually a long ridge, stretching from Jaukensattel, 1615 m, on the western side, to its tail on eastern side, sinking in the woods around Kreuzberg pass, 1074 m. Besides the highest point in this ridge there are some more relatively unimportant points, like Kleines Reisskofel, 2148 m, Dristallkofel, 2094 m, Sattelnock, 2033 m etc. South of the summit there's a nice and broad alpine pasture, called Jochalm, 1554 m. It is opened and sunny, offering great views along and across the Gail valley.

Both northern and southern face of Reisskofel are rocky. On the southern face one can find impressive rocks intermitted with grassy slopes, while on the northern face there's almost only rocks, and in one broad ravine also long into summer a small snowfield. Although marked paths lead to the summit from three sides, ascending Reisskofel is not just an easy hike. But due to many forrest roads, reaching higher slopes of the mountain, the ascents are not long - they can be done in less than 3 hours. Being a highly desirable goal in the mountain neighbourhood, the summit is frequently ascended. The view from the summit is also very rewarding.

The first ascent on Reisskofel was done in 1848 by Johann Festin von Wald (Walden Hans) from Reisach. The famous paul Grohmann ascended it in 1855. The first crossing was done only in 1919 by H. Koban and E. Pichl, later that route was secured for public visit.

From the east you can reach Drau and Gail valley from Villach. The trailheads from Drau valley can be also reached from the west - you drive along the river from Lienz. Coming into Gail valley from the west (for example from Italy) is more inconvenient - you must drive from Silian over Kartitsch saddle and by the winding road down to Gail valley. Gail valley can also be reached from Italy - over the main crest of Carnia Alps. There are two passes: Ploecken Pass / Passo di Monte Croce Carnico and Nassfeld Pass / Passo Pramolo.

There are four marked paths/routes. See them in detail on the map above! Reisseck is the massif west of Kreutbergsattel.

Summer and autumn, when rocks are snow-free. A winter climb could be much harder. Current weather condition shows this webcam.

Climbs on Reisskofel are supported by two nearby huts and one bivouac: