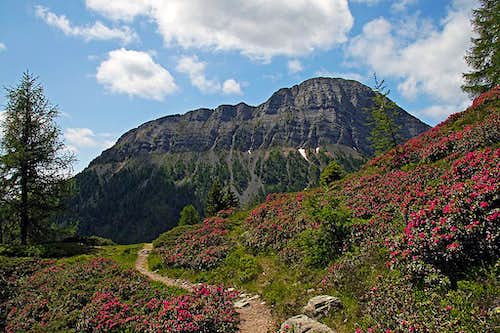 Staff from the N-NE 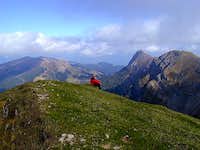 Staff from the W, from Goldeck

Staff from the NE

It is no doubt that Staff (in some sources also: Hochstaff) is the most beautiful mountain in the small group of Latschur, Gailtal Alps. All right, also Latschur, the highest one, has a steep northern face, but it is only 19 meters higher and it can not rival the beautiful, rocky north face of Staff. And even more, Staff is exposing its parade face to the crowds of thousands of visitors who come in all seasons on the popular nearby summit of Goldeck - either by a cable car in winter or by a mountain road in summer. From nowhere Staff is seen so nicely as just from the summit of Goldeck, or just below of it. The characteristic shape of Staff is seen already from the main valley of Drau/Drava river, for example when we are driving from Villach/Beljak towards Spittal. After passing Patternion, on the left the valley of Weissenbach opens, and above it we see the characteristic, sharp nose of a mountain, which rarely anyone knows its name.

The group of Latschur consists of a handful of summits which exceed 2000 m of altitude. On their southern sides all of them have grassy slopes till their tops. Some are more, others less steep, on the ridge you can see also a few rocks. Also the southern slope of Staff would look the same if it wasn't even more steep, so in the middle a landslide once uncovered a big, slanted rock slab. To have an impression - the steepnes is just too high to allow direct skiing over the southern slope, but in good conditions in its western or even eastern edge the slope could also be negotiated with skis. The northern slopes of Latschur group are steep and rocky, but only Staff has a compact, almost 300 m high northern wall. It has an interesting, characteristic appearance. Its distinct, horizontal layers indicate strong forces which created these mountains by pushing them over the base which is today on some 1700 m of altitude. But Staff's north face is also having many vertical ravines, indicating erosion forces. On their bottoms along the whole N and NE face scree fields are adding to the picturesque visual impression. And that's all about the appearance of Staff. The western ridge is quite sharp on top (but still easily walkable), the eastern ridge soon turns into the SE direction and lowers below the timberline. On the north, a broad Gusenscharte (pass, saddle) delimits Staff from Goldeck.

The view from Staff towards the E, along Drau valley

Due to its quite isolated position, Staff has a really broad panorama on the mountaineous world of the Eastern Alps. Those 9 more meters of the already a bit distant Latschur obscure nothing, so you can see the mountain groups all 360 degrees around. Towards the E you see along the valley of Drau/Drava river - on the left the Nockberge, on the right the lower Gailtail mountains towards Dobratsch, and then further Karavanke/Karawanken almost till their end. In the very distance there are Kamnik Alps, but right of Dobratsch, already much closer, there is the great northern flank of Julian Alps - their sharp summits are seen like on a string. The southern horizon shows long chains of Gailtal Alps, Then Carnic Alps main ridge and behind the southern groups of Carnic Alps. The even more rugged summits are on the SW - Dolomites and Lienz Dolomites. On the W and NW we see many groups of Hohe Tauern, of course with Grossglockner rising in their middle. The panorama of thousands of summits is completed on the north where in a clear day behind Nockberge also Niedere Tauern and some Northern Alps chains are seen.

There are quite some approach directions to ascend on Staff. Their nature is very different, as is the nature of ascends on top.

1. Goldeck. The usual trailhead is on the big parking place (Seetal) just south of the summit, on 1895 m. Till there you can usually get by car - by the eastern ridge, from Zlan. The road is opened usually from start of May on. The toll for cars/motorbikes is 13EUR/7EUR. If in winter the road is cleaned you may get on top for free. The other option is to get below the summit of Goldeck by a cable car from Spittal (17EUR). In winter the majority of ski slopes is on the western side, but you can get on the southern side by ski lifts and chair lifts. In summer from the upper station there is a short walk over the ridge to get on the southern side. In any case, either from the Seetal parking place or from the upper station of cable car you comfortably get down on Gusenscharte, 1700 m. From the parking place you have a mountain road till there. A mountain bike would be useful there, but on the parking place there's a sign that biking by those roads (they go all across towards Latschur) is forbidden. That's strange for Austrian tourism!

2. Stockenboi. This is a village in the valley of Weissenbach, on some 900 m, SE of Staff. From the centre of scattered settlements, the mountain road goes up on the ridge of Bucheben. But it soon gets closed, so we must walk up from the altitude of some 1100 m.

3. Stockenboi west. A bit further up the valley, near Tonbodner, 855 m, another mountain road deters right up. It brings you below Karalm, and even further towards the NW, on the southern slopes of Staff. I have no information about this access, but very likely this road is also closed for public traffic. This can be a good approach option for a southern ski tour.

4. Weissensee, 935 m. On the eastern shore of this nice lake there is a big parking place from where you can start a more remote tour on Staff from the SW.

3. Via Karalm. This hut can be reached from the valley of Weissenbach (Tonbodner, 855 m) by a mountain road in some good 2 h or from Weissensee, 935 m, by a mountain road and marked path in some 2 h 30 min. From north below Karalm, 1500 m, the road continues towards the NW and ends below Kopasnock on some 1700 m. Till here eventually you can use also a mountain bike. The further ascent goes towards the north and should be fairly easy. After reaching the main ridge you turn right and go on top as described in #1. The southern slopes in this area are not very steep and can be appropriate also for skiing.

4. From Weissensee, 935 m. A longer, but nice hiking round tour. As described on the page of Latschur, we go from the Weissensee camping place by the marked path No. 265 towards the N on Stosia saddle, 1811 m, then further by the main marked path No. 210 towards the NE on Eckwandsattel, 2070 m, and from there by the main ridge towards the E on the summit of Staff. Even more beautiful is the detour - from Stossia on the summit of Almspitz, 2180 m, then towards the E by the main ridge on Eckwand, 2221 m, and down on Eckwandsattel. Or, if you want to swallow all mountains in the group - before Almspitz ascend also Latschur and return. On the return from Staff, you can go by the above route #3 on Karalm and from there return to Weissensee. That is then a good full day round tour.

On the west ridge - behind is the summit of Eckwand

No limitations. Many mountain roads are closed for public traffic, the road to Goldeck needs to be paid.

You can ascend Staff any time of a year. Winter ascents are demanding and require full winter equipment (ice pick and crampons), because the summit ridge is sharp and the slopes steep. In good conditions Staff is also a nice goal of a ski tour. The southern ski tour is long and strenuous (below a lot by mountain roads), the northern approach must be very nice, but the summit ridge is with both variants demanding for skiing. The advantage of the northern approach is of course the ski centre on Goldeck. 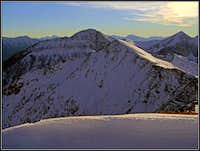 If you have information, please add it, especially something about this:

> Descriptions of other hikes on Staff.
> Descriptions of winter ascents and ski tours.
> Are there climbing routes over the north wall?
> Add pictures showing Staff from other sides and in other seasons.