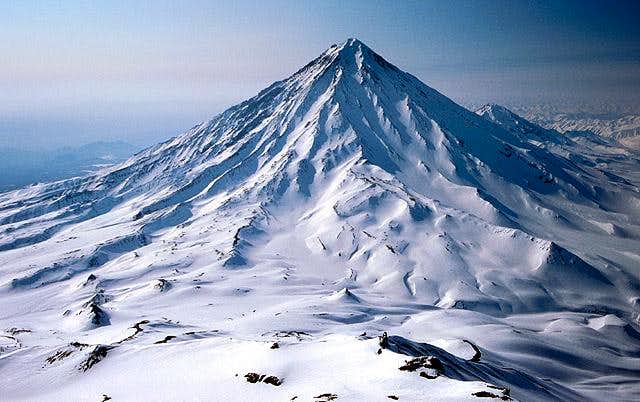 The last period of higher volcanic activity was noticed in 1956, only small furmaroles can be seen on the higher parts of couloirs and stone ribbons. The summit is partly cutted off to the west. Relative heights are from the north 2300 m and from the south 3300 m. Two glaciers of the length 1 km and 4,2 km lead from the summit to the north-east. Small rests of former crater, that is opened to the south, with radius 90-110 m is on the west part of the summit. The walls of crater have remained up to 20-30 m. The stepness of slopes started at about 15-20 deg at the bottom, and raised up to 45-50 deg in several highest parts of couloirs.

Flights to Kamchatka are described at the pages for Viljuchinskij volcano and at Klyuchevskaja sopka page. From Elizovo airport you can take the bus 106 to the junction at the beginning of "Suchaja recka", then about five km on dirty stone road, and about 16-17 km through the riverbed of "Suchaja recka" to the hut base. Another possibility is taking a taxi from Elizovo to the end of dirty road, so that only 16-17 km remains for you. The last possibility for lazy people is ordering an off-road 4WD car that take you directly to the hut base. Also, if there is a lot of snow in spring and winter, the second half of the route can be done on snowmobiles.

Similar to other volcanos at Kamchatka. You need valid tourist Russian visa, registration at OVIR for all foreigners within three days after you fly in Kamchatka. Moreover, a special permit for Avacha national park (also called National park of three volcanos) including permit for border zone is necessary. All of it can be managed through several Kamchatka's travel agencies.

Korjakskij volcano is accessible over the whole year.

You can sleep in huts "domiki" for USD 10-15 per person. You can set up a tent somewhere around.

According to scheme introduced by Vladimir Kopylov (scheme of Korjakskij, Avachinskaja, and Kozelskij), there are four classical routes on Korjakskij volcano graded 2b and 3a of the Russian scale (see Johan Heersink pages for explanation of this grade system). Majority of people try to ascend volcano by classical route 4 that leads on the south-east rib or modification of this route through the left from rib couloir. The same route is used for descending, or in case of bad windy weather it is much faster to descend via the zig-zag more to left placed couloir with rocky walls on both sides

Korjakskij is famous for skiing and snowboarding both for extreme and upper-intermediate athletes. Be careful with possibility of slab avalanches on the highest part of the classical route. Quality of snow can change significantly with different altitudes, orientation of slopes, and theirs influencing by wind. In lower parts of slopes there can be many free small stones on snow that annoy skiing or snowboarding.

Info about ski-alpinism at Kamchatka's volcanos is at:
Kamchatka's skiing 2002

You need crampoons, axes, and helmet as free stones fall down on ribs and colouirs all over the year. It is better to use rope, ice-screws, and snow anchors in the highest part of climb. For snow climbs, skiing and snowboarding, it is necessary to carry avalanche transceiver, snow showel, and snow probe.