The Volcanoes of Kamchatka 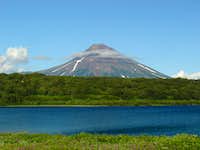 The Kamchatka peninsula is located in the northeast of the Russian Federation between 50°51’ and 60°50’N and 155°30’ and 164°40’E. It is surrounded by the Bering Sea and the Pacific in the east, and the Okhotskoye Sea in the west. The north-south expanse of Kamchatka peninsula is 1180 km, the maximal width in east-western direction unfolds 480 km from east to west, and the surface area of the peninsula adds up to 270,000 km². The southernmost point of Kamchatka is the flat Cape Lopatka.

Kamchatka is famous for its volcanoes. The beautiful scenery of a large number of active volcanoes in largely untouched wilderness led to the addition of "The volcanoes of Kamchatka" to the UNESCO World Heritage list of regions with outstanding natural value.

Over a hundred volcanoes are distributed over Kamchatka, a dozen or more of which currently have active vents. A majority of the volcanoes are composite stratocones. The younger, currently more active volcanic zone lies to the south-east of the peninsula along the Pacific coastline.

The high volcanic activity on Kamchatka is based on the fact that the peninsula is located in a tectonically, seismically and volcanically exceptionally active region: it is the northern boundary of the Pacific continental plate, the Pacific Ring of Fire (which also includes the Aleutan islands and extends way down to Japan and Indonesia). Volcanism and seismicity on the Kamchatka Peninsula as well as that of adjacent Aleutian and Kurile island arcs is produced by subduction of the oceanic crust under the Eurasian continental plate at a modern rate of 9-10 centimeters per year.

The climate of the Kamchatka peninsula is determined by its geographical location far East of the Asian continent at high latitudes. Thus, the climate of the Kamchatka Peninsula can be described as a boreal climate with maritime influences coming from the bordering Pacific Ocean and the Ochotskoje Sea. The presence of a large water masses surrounding the peninsula has a moderating effect on the harsh boreal climate: the temperature amplitude (the absolute differences between the extreme temperatures in one year) is rather low but the total precipitation (rain, fog, snow) is larger compared to the continental climate zone.

More information:
More about Kamchatka volcanoes
Kamchatka and the "Ring of Fire"

Europeans who first appeared in Kamchatka in the 18th century were stunned with the extensive number of brown bears. Ursus arctos piscator is one of the largest sub-species of brown bear in the world. Although the size of the Kamchatka brown bear is terrifying, the local bears, unlike their Siberian relatives, happened to be quite harmless. Perhaps the reason for Kamchatka bears' peaceful personality is found in their fish diet that they prefer over meat. The Kamchatka brown bear mainly feeds on salmon and berries in summer and fall, whereas they eat green cones of Pinus pumila in spring.

Hikers and mountaineers are urgently advised to store their food supplies safely and to not leave any food traces in camp or at fishing sites. Bears do not only occur in forests and tundra, but they have been reported to also ascend to alpine meadows every now and then.

Georg Wilhelm Steller discovered these huge birds during his expedition with Bering to the coast of Alaska and the Commador Islands in 1741. The Stellers sea eagle is the most famous known bird of Kamchatka. A full-grown eagle carries a wingspan of seven and a half feet and weighs nearly 16 pounds. The eagles build massive nests atop shoreline cliffs and crags; a nest is constructed no more than a few hundred meters from shore and can be found at least 5 meters from the ground in height.

The clear and beautiful rivers of Kamchatka produce up to one-quarter of all wild Pacific salmon, and there are a series of rivers that host the greatest diversity of salmonid fish on Earth, some of which are even endemic to Kamchatka. During the time of the salmon runs in late summer and fall, the rivers are full of fish.

Soils on Kamchatka are very fertile and water is plenty - this leads to enormous growth of herbaceous plants. Within one growing season, these plants reach over 2m in height.  It is indeed quite some experience to try to find your way if you can hardly see over the top! Especially the river banks are full of these high plants of different families (mainly Senecio and Filipendula).

The stone birch forest is found at lower elevations in the valleys. The trees often don't grow perfectly straight, tree trunks have the weirdest turns and kinks - maybe the huge amounts of snow in winter cause this kind of growth.

This is your enemy. Stlanik is a dense area of tall shrubs, they can be small pine shrubs (Pinus pumila) or alder or willow shrubs. Sometimes the Stlanik is so dense that you can only get through with brute forces - a heavy backpack on your doesn't make it easier. Stlanik can be found almost everywhere: on mountain slopes, on ridges in tundra landscape and in zones of disturbance in forests. 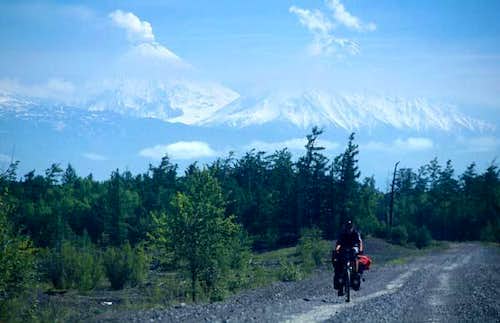 cycling in the shadow of the Kliuchevskoy group

Most popular hiking and mountaineering areas on the Kamchatka peninsula:

These mountains are very easily accessible from Petropavlovsk. They are very popular mountains for skiing. They are within the Nalychevo Nature Park, a wilderness area with marked trails and mountain huts. There are some nice hot springs, too.

This region in central Kamchatka contains the volcanoes Kliuchevskoy, Tolbachik, Bezymianny and Kamen. Between Kliuchevskoy and Tolbachik there is Kamchatkas largest Glacier, the Erman Glacier. Great hiking, mounaineering, and skiing in mostly in undeveloped wilderness

They are easily accessible. More people are there, but still great scenery, but often unpredictable bad weather.

These are accessible only through a several-day long wilderness hike or by helicopter, but very spectacular scenery. Hiking to Maly Semiachik or Karymsky will go through the Nalychevo Nature Park.

Uzon Caldera and Valley of the Geysers

These are not mountains as such, but are very spectacular regions in the Kronozky Nature Reserve. The scenery is spectacular but it is difficult to access. Permits are necessary for individual hiking, and they are hard to get. Most packaged-tour operators offer a visit allowing not more than a short walk. In June 2007, the Valley of Geysers has been affected by a huge landslide which formed a natural dam leading to flooding of large areas of the valley and destruction of most of the geysers.

Wilderness at its best. You can take several-day strenuous hikes to Khodutka, Asacha, Opala or Ksudatch or any of the other smaller volcanoes.

The Lake is famous for its richness in Salmon. Therefore, a huge number of bears can be observed there, and the lake is also one of the main winter habitats for the Steller's Sea Eagle. Organized tour operators often include a day-trip to the lake (by helicopter). The lake area is in the South Kamchatka Nature Reserve, permits are necessary for extended hiking.

Here is a well-developed overland bus system running on Kamchatka. In general bus fares are cheap. Regular bus services go from Petropavlovsk along the main track north up to Ust Kamchatksy, stopping at major settlements along the way or traveling non-stop to specific towns in Kamchatka ('Express Bus'). Overland buses to Sokotch-Milkowo-Kliuchy-Ust Kamchatsky and to Sokotch-Ust Bolshervesk-Oktavia leave twice a day (8:00 and 15:30), tickets can be obtained in advance at the "Autostanzia" (main Bus station at Km10) in Petropavlovsk.

A frequent local bus service connects Petropavlovsk with Yelizovo (10 R) or the villages Paratunka (30 R) and Termalniy. City buses form a network throughout Petropavlovsk (8 to 10 R).

A more flexible way of getting around is by taxi. There are several taxi service companies offering fares to various places in the Petropavlovsk / Yelizovo area. If required, even small trucks can be rented with a driver, which is especially useful for groups. The exact prices are subject to bargain. It is also possible to rent a car or truck with the driver for a few days to explore specific regions. The big truck KAMAS with a cabin for about 20 persons will cost about 5.000 to 5.500 rubles per day, including driver.

Remote regions can only be accessed by helicopter. There are several companies offering helicopter flights, payments are per hour of flight. For small groups, it is worthwhile to team up with other tourist groups for cost reduction.

Kamchatka is open to tourists since 1991 and remains an important region for the Russian military, as Kamchatka is a Russian border zone. Therefore, entry to some regions in Kamchatka in the past had required special permits or was completely restricted. These restrictions are slowly being removed, but be prepared to be checked for your passport and visa information around formerly closed regions. Individual travels are now allowed throughout most regions of Kamchatka except for the Commander Islands and the Kuriles, which still remain as restricted zones.