Beginning of volcanic range north-east from Petropavlovsk-Kamchatskij is volcano Kozelskij. Its slopes started smoothly from the Pacific ocean coast. The crater of volcano opened to the east is destroyed by strong erosion. No one erruption is known in historical times here. Small glacier starts from the crater to the east. 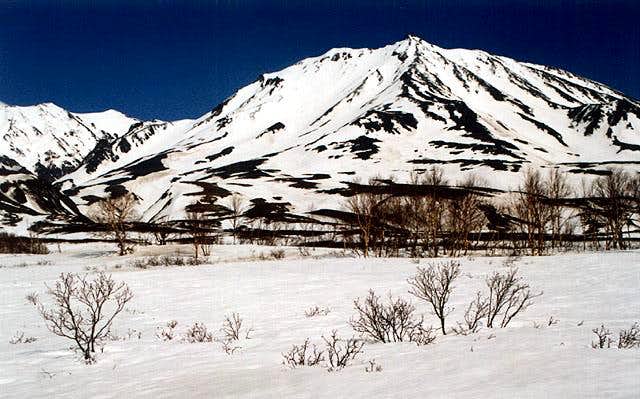 Reaching the summit nice panoramatic views are opened at the Pacific ocean and its coast, at Avachinskaja sopka, and to the south the group of volcanos Viljuchinskij, Mutnovsky, and Gorely.

Flights to Kamchatka are described at the pages for Viljuchinskij volcano and Klyuchevskaja sopka page. From Elizovo airport you can take a 4WD car to Petropavlovsk-Kamchatskij to the cross-road with the village Radygina.Take one of the forest road to the north or go along the stream Kozelskij to the base of the volcano. From the south side volcano starts with sharp rocky summit.

Similar to other volcanos at Kamchatka. You need valid tourist Russian visa, registration at OVIR for all foreigners within three days after you fly in Kamchatka. Moreover, a special permit for Avacha national park (also called National park of three volcanos) including permit for border zone is necessary. All of it can be managed through several Kamchatka's travel agencies.

Kozelskij volcano is accessible over the whole year

There are many routes on Kozelskij graded 1b plus of the Russian scale (see Johan Heersink pages for explanation of this grade system).
You can chose between fully snow and ice climb in winter, spring and beginning of summer, and rock climbs.

Many routes are all around the volcano and its slopes. Majority of them are nice snow and rocky climbs with possible ski and snowboard descends during the winter, whereas only rock climbs are during the summer. This mountain is also very popular for quided heli based skiing and snowboarding.

Info about ski-alpinism at Kamchatka's volcanos is at:
Kamchatka's skiing 2002

Good weather and snow conditions enable not using crampoons, axes, and helmet, but if the conditions are getting worse, these equipment is highly recommendable! Obviously, full avalanche protect equipment is necessary during the snow.