Highest active volcano in Eastern Asia. Sometimes it is defined as the highest active volcano in the whole Euroasia (due to Damavand not significant eruption in last centuries). It is cone shaped volcano, that can be climbed from all sides. Mostly, climbs are from the pass between Klyuchevskaja nad Kamen from the south. Less popular is west route. The height of Klyuchevskaja is in the range from 4750 to 4850 m according to different sources. However, on the north side of the summit crater it is 4750 m. 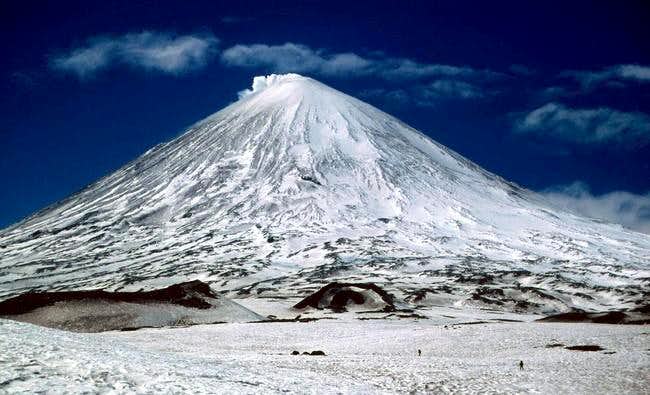 The first ascent of the peak was in 1788 by Daniel Guass and two other members of the Billings Expedition. The second ascent was not until 1931, 143 years later! Several of the members of the 1931 expedition were killed by flying lava bombs on the descent of the peak. Mike Kelsey info - added by Scott Patterson.

A flight to Elizovo (the only one international airport at Kamchatka-peninsula), that is about 30 km away from Petropavlovsk-Kamchatskij. You can order an accomodation in Elizovo, or you can move to Petropavlovsk-Kamchatskij or Paratunka. Instead of **, ***, and **** hotels, you can find hostels like accomodation in Severovostok (part of P-K) in "Lyznaja baza Lesnaja", that's the main centre of XC skiing at Kamchatka. Two companies provide bus connection between P-K and Klyuchi several times a week. Tickets are for approximately 600 RUR (Russian rubl) and it is better to buy them in advance. Time for travel is up to 11 hours, and it depends on ferry over the Kamchatka river near Kozyrevsk. More comfortable possibility for a small group is ordering a van (called at Kamchatka "mikrik") for up to 8 persons with equipment. From Klyuchi, it is about 58 km to the altitude approximately 2000 meter on the north side of the Klyuchevskaja's conus. Last possibililty is a helicopter flight from Kozyrevsk - mostly to the base camp on the south side of volcano.

You need valid tourist Russian visa, registration at OVIR for all foreigners within three days after your fly in Kamchatka. Moreover, a special permit for Klyuchi and Klyuchevskaja is necessary as it is border and army zoen. All of it can be managed through several Kamchatka's travel agencies.

It is also possible to order the (required) invitation from http://www.visatorussia.com to get a visa via your local embassy - some travel agents have quite high fees for this job. added by 2hansen

My experience is that it is better to let any Russian travel agent to manage visa, etc. or to ask at your local air-ticket provider for it. Straight from the embassy it could be a trouble. Usual cost for it is about USD 50 + visa.

Klyuchevskaja is accessible over the whole year. However, from autumn to mid spring the weather is mostly really terrible and succesfull climb is just a game of weather. Skiing is recommendable from the end of March to mid May. Better conditions are on the north, as the snow line on the south side is much higher. Surface consist of different kinds of snow, ice, glaciers, and a lot of stones and rocks. On the summit the snow is soft as a result of strong constant volcanic activity. During the summer climbs are easy all over the volcano.

You can camp where you want - tent, digging bivouac or snow caves. Moreover, there are several volcanologist's huts/bases that can be used. For a pity, most of them are partly of fully destroyed.

The obvious plcae to put up a base camp from S is in the pass between Kamen and Klyuchevskaya. From here it is possible to climb both peaks. Getting to the pass might be a hassle either if you approach from NW or SE. From NW you have to negotiate a huge dirty glacier and from SE it is a long ascend in deep soft snow. Both approaces are beautiful hikes.by JXM

Definately bring a multifuel stove and be prepared to clean it a lot. The fuel obtained in Petropavlovsk is kerosene or diesel, none of them very clean. It is impossible to get gas cannisters at Kamchatka.by JXM

By the way, camping gas canisters can be bought in the outdoor shop "Red-Fox" next to the supermarket "Samsa". Fuel is also OK with stoves like MSR Expedition and MSR Dragoon Fly.

During the summer a helmet is necessity due to the falling of stones and rocks. In summer 2003, one Czech turist was hit to death by stone on the slope of Klyuchevskaja, and several members of rescue team were injured. For winter and spring climbs you need crampoons, ice-axe, avalanche transceiver, snow showel, etc. Helmet is recommendable, but not necessary, as majority of stones and rocks area stabilizated by ice and snow.

Difficulties of the climb are mostly near the summit - strong volcanic activity, gases, temperature, etc. During the climb the worst troubles are falling stones and rocks. We set up our camp on the north at the altitude 2070 m, so that, 2700 altitude meters were for summit day. Usually, the advance camp is set up from the north/north-west at 2700-2900 m. From the south the summit day starts from the pass between Klyuchevskaja and Kamen.

Maps are available at: Map server

It just depends on you definition of active or inactive volcano. By the way, steam and sulfur gases do not exude ocassionally, but constantly. Not only from the top, but also about at the altitude around 5300 m. You can try it :-))) Moreover, check this http://www.skimountaineer.com/ROF/ROF.php?name=Damavand

The mountain's name is spelled incorrectly in Russian.

It should be: Êëþ÷åâñêàÿ Ñîïêà -- The second "a" in the first word is missing.

Thank you a lot for the article and the useful information. I'll arrive in Klyuchi in 3 weeks. Is still necessary to buy bus ticket from PK to Klyuchi in advanced? If so, is there any site where I can purchase it online? Thank you!